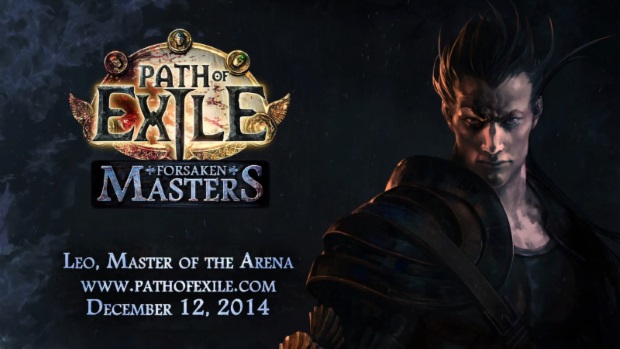 With only a few days left until the December 12 release of Path of Exile‘s player-versus-player-centric Content Update 1.3.0, Grinding Gear Games has released a new, action-packed teaser trailer. This time Leo Redmane, Master of the Arena and Path of Exile’s newest Forsaken Master, shows off a glimpse of the game’s upcoming PvP combat. Click below to answer his call to battle:

Like the other masters, Leo offers a hideout (in the Gardens tileset) with his own decorations and PvP crafting options. His daily missions all involve playing PvP, with rewards for completing different objectives. Unlike other masters, Leo doesn’t take up a slot in the player’s hideout. Players can have him in addition to their regular set of masters.

Content Update 1.3.0 will bring forth various new enhancements to Path of Exile, with a heavy focus on improving and accentuating Path of Exile’s PvP elements. These additions and improvements include the Torment and Bloodlines Challenge Leagues, a new PvP-focused Forsaken Master, competitive PvP tournaments with regular Seasons, PvP-only characters, new gems and Unique items, a massive update to the Passive Skill Tree, and much more.

For further information about these features as well as others brought forth by Path of Exile’s Content Update 1.3.0, stay tuned to the Path of Exile website at www.pathofexile.com/1.3.0.