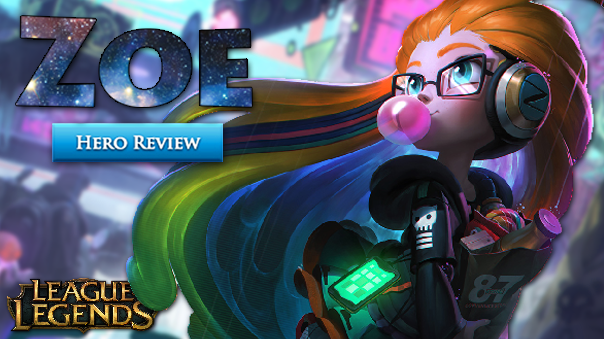 Zoe, the Aspect of Twilight, is a duty-skirting cosmic messenger skipping across Summoner’s Rift with cute poise and deadly long range attacks.

With unbridled joy and enthusiasm, this caffeine fueled trickster features a spammable and mechanically intensive kit providing flashy play-making potential and the intense satisfaction from pulling off intricate and well aimed combos. Many will absolutely despise her for her slipperiness, distant damage nukes, random summoner spell pick up, and bonkers crowd control. Others however will love the thrill of dipping and weaving through combat mind bendingly predicting and annihilating the opposition.

-Squishy and Lacking a Reliable Escape

-Extremely Difficult to Excel With

Zoe is primarily a mid-lane burst mage with adequate from-a-distance wave clear and fantastic sieging ability. Otherwise she may be played as a relatively immobile poking support that can take utter control of trades with constant, difficult to dodge, Qs and Es.

In either position, she’ll focus on eliminating high priority targets in a single combo, or otherwise pepper the opposing frontline with damaging vollies and peel for teammates with Sleepy Bubble Trouble.

While extremely snowbally even without a high gold income, Zoe can be managed by shutting her down early and/or focusing her hard in skirmishes. With no reliable means of escape, and burdened by a generally low health pool, she’ll typically be a fairly easy target to lock down with a little bit of burst.

The core combo every Zoe player should utilize immediately goes something like this: shoot a Q behind yourself at an angle, aim and activate your Q at a target’s predicted path, quickly close in with R, use E or auto attack, blink back, and wait for that little ball of death to eradicate whatever it hits.

It seems fairly simple at first, and truly many trades go off without a hitch. The tricky part comes from efficiently managing your damage output at every opportunity. Everyone can land the E skillshot for an easy Q target follow up, but can you do the same when multiple other players and their altogether unpredictable actions are happening in small space in a short amount of time? While the expected value is high, the actual outcome will become much lower as layers of complexity are added.

Not to forget, being able to land the sequence of abilities isn’t all that it takes to be successful on Zoe. You also need to be able to survive. She is still very much a squishy mage with virtually no way to escape being dove. Sure, she can blink away for a brief second allowing for a slight respite, but enemies will either burst her down in no time at all, or just wait to kill her on the inevitable return. Additionally, as strong as sleep is, it still takes over a second to take into effect, which in many cases will be too late.

There’s also one other part of her hit that’s honestly worth an entire essay analysis, but I’ll keep it concise. Arguably, Spell Thief is one of the most toxic abilities currently in the game. To recap, you can pick up Summoner Spells or activatable items used by opponents or randomly through minions. Riot currently has a video showcasing the picking up of 3 Flashes in a row, and while that’s wild in itself, it actually gets worse, much worse.

Let’s say you and an opponent are mindlessly laning in the mid-lane until BAM, you get a Hextech Gunblade or Exhaust in addition to your Ignite. Most opponents would die to the surge in power, or be grievously wounded ultimately giving up precious lane control. And why did this happen? Not as mistake by the enemy, but by random chance.

In a parallel situation, if the opponent used an Ignite and failed to get a kill, you then get to punish them by picking it up and using it against them. That’s fine. But getting something powerful enough to change the course of the game through a dice roll is not. And that’s not even taking into account the other half of that spell which greatly aids in dueling by dealing additional damage and granting a mini Ghost effect.

Just to take it one step further, think worst case scenario in a professional match. A Zoe shows up bot lane and her opponents decide to muster up a Baron attempt in an effort to punish the misposition, oh but look, she randomly got a Teleport off a minion and can now join her team to stop the strategic maneuver.

Granted, on the other side of the spectrum you get plain useless things or nothing at all for long periods of time. However, regardless of where the power level arguably is, the fact of the matter is that the margin of variance on Spell Thief is too high for any level of play.

Zoe’s place in the meta is an obscure one. I know for a fact she’s stylish and fun to play, but at the same time difficult to do well with. In other words, a fairly high play rate pick, but plagued with a low win rate as a result.

As you go up higher and higher in ranks, her win percentage will undoubtedly go up. The standard level of output will normalize and she’ll have more predictable results. But I also think that means her play rate will also decrease as her shortcomings are more pronounced and the level of satisfaction from making good plays diminishes due to being expected or otherwise outright denied.

Excitingly, there is also a bit of an X factor here. What if she’s actually immensely broken? Like if someone could just reach the astronomical skill ceiling Zoe could have, would it force auto-bans no matter the rank? And I don’t mean just abusing Spell Thief, I mean top players getting so good at handling the golden combo as to mercilessly and suffocatingly dominate opponents in every conceivable situation or team composition.

As it stands, even the very best are still getting a handle on how she works, but just how big is the gap between where she is now and where she could be? It’s extremely hard to say, especially considering a nerf or buff in the meantime could drastically alter the outcome, but she could very well be the next glory days Zed, Leblanc, or even *shudder* Kassadin.

But that’s wishful thinking anyway. Based on her kit alone, I think overall she’ll be a fun niche pick for the Johnnys of the world. She won’t be suitable for all drafts, but if you don’t really care, you’ll have a fun time playing this champion as it stands regardless of the outcome. I think her playrate in casual will be one of the highest due to this reason alone. But as you go up and through even professional play I think she’ll settle as a gimmick pocket pick that packs a lot power when selectively called upon, but isn’t necessarily someone that will reliably return time and time again.

This silly little ancient delinquent girl is positively bursting with thrill and excitement. Every part of her kit – and especially the visuals and animations – lends itself to a joyous adrenaline pumping experience.

While annoying to play against and exceptionally difficult to master, Zoe is the kind of hero you’ll gladly sink dozens of hours into forever chasing the high from perfectly executed maneuvers and frequently devastating cross screen balista bombs.