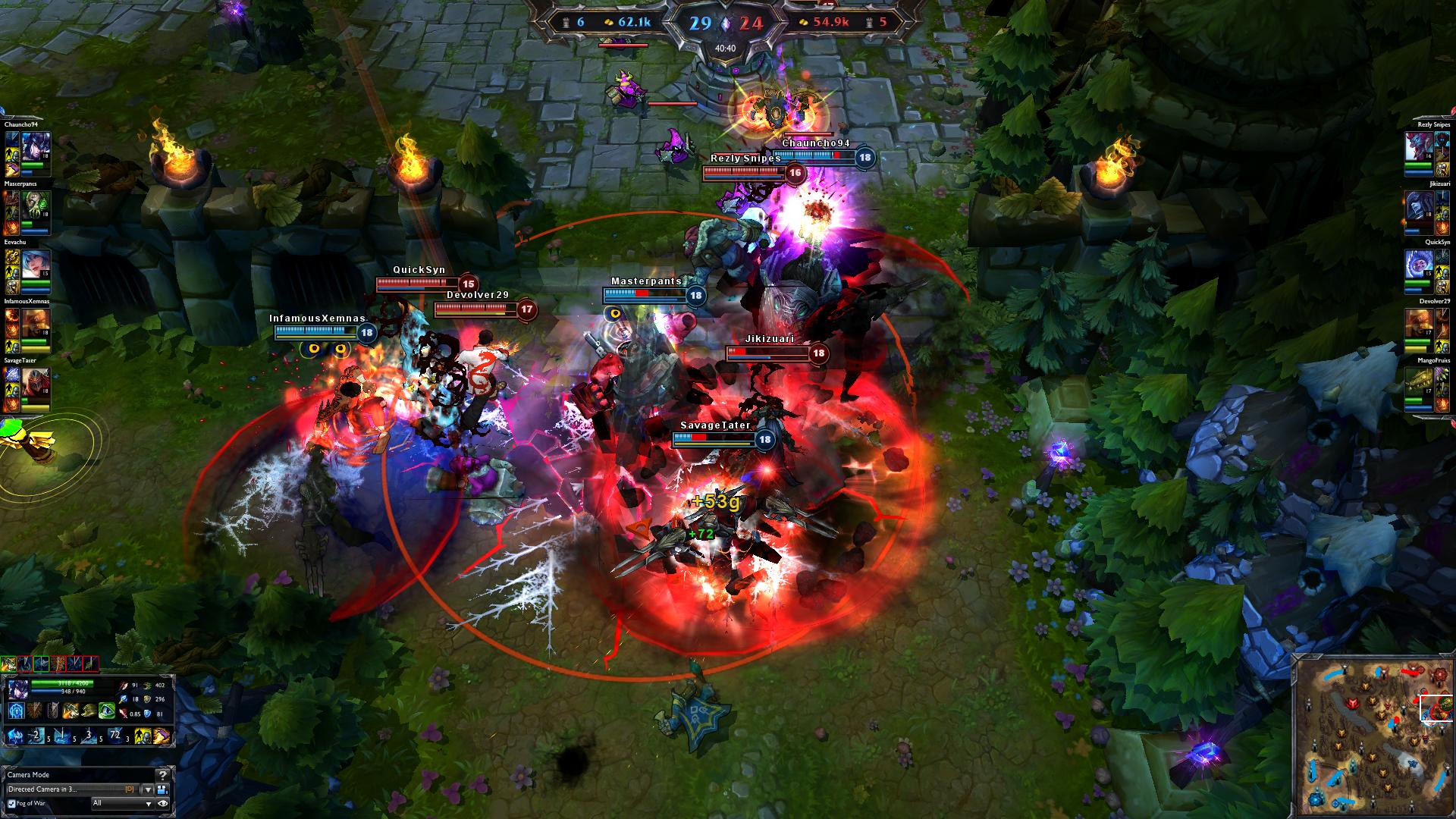 League of Legends is a multiplayer online battle arena – MOBA – ran by Riot Games and is one of the most popular amongst them. League of Legends is known world-wide and is very popular amongst gamers. Due to its popularity, it has also developed into a competitive e-sport as well. Every month, Riot Games adds one or more champions to League of Legends and releases at least one skin with every champion releases. Every month also holds at least one update or patch to the game and players can often look forward to seeing a new addition added. These changes will often be based on the community and players rather than just certain changes that need to be made. The game content and the community have made League of Legends the most popular MOBA-style game on the market right now.

Gameplay & In-game shop
If individuals have played other MOBA-style games, they’ll be familiar with League of Legend’s play style. The differences between MOBA-style games comes with champions but most of them will use a system where certain champions have abilities to help them survive on a battle field and to fight other champions. Players have to work together in a fast-paced gameplay that involves certain strategic planning and engagements to come out victorious in every match.

As matches start up and progress, players will receive gold. Gold can also be obtained by killing minions, jungle creeps, towers, and other champions. This gold is used to buy items to increase a champion’s stats and abilities. When matches run for a long period of time, champions will become very strong and every team fight will end in multiple champion deaths and certain objectives will be accomplished.

Graphics
For League of Legends, every graphic is well done. Certain champions need a graphical touch up, but those champions receive their updates when patches are added into the game and when all prior testing has been done on the public beta environment. The maps look great and I personally think that the only thing that needs improvement is Summoner’s Rift, the 5v5 map. If certain details look outdated, Riot Games will often look into the situation for the community and decide what needs to be fixed. The Shadow Isle map was once Twisted Treeline, but Riot Games did a complete overhaul of Twisted Treeline and made it a very sinister looking map. My favorite map, due to its graphics, is the Howling Abyss map. 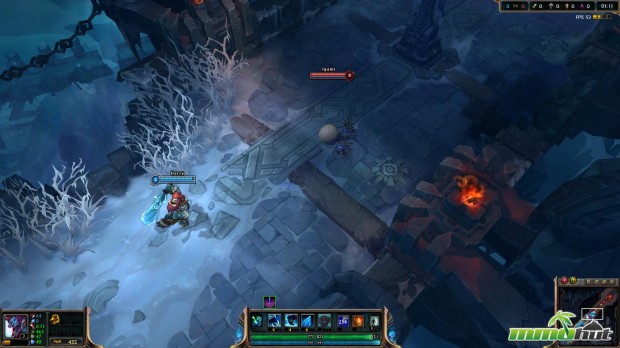 Champions & Skins
Playing the game is one thing, knowing the champions is another. It is helpful to know what skills certain champions have in the case that players are faced against them. League of Legends is not as simple as pressing keys and hoping things die. Every champion has a different skill set that plays particular to that champion and works well in conjunction with certain other champions. To allow players to test out different champions, there is a weekly free champion rotation. Other than that, players must buy their selected champions with riot points or influence points to keep them permanently.

In addition, every champion is released with skin(s) and certain champions will receive or have received multiple skins due to special occasions or Riot Games decisions to make skins for a certain champions. Often times, the skins will have special particle effects that go along with the designated skins. However, most skins will cost Riot Points (requires real money). Riot Games will occasionally provide a chance for players to obtain skins for free at certain gatherings, special events, or online events. 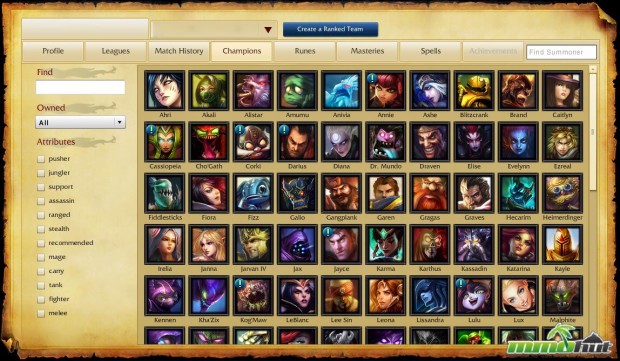 -Summoner’s Rift is the oldest 5v5 map for League of legends. This is the main mode that is played in tournaments and is also the most played map for League of Legends. Most of the strategies and tactics will be seen on this map. The matches held in Summoner’s Rift will often be the longest matches compared to the other maps. Teams usually consist of two single champion lanes, one duo lane, and a jungler.

– Shadow Isle is a map designated for a team of three to face off against another team of three. This map is much smaller than the Summoner’s Rift and the map has certain mechanics that other maps do not. I personally do not play this map very much, but this map often consists of a two single champion lanes and a single jungler.

– This is a dominion-type map that has players capture certain points. When one team has claimed more capture points than the other team, the team that has less capture points will begin to lose life points off their Nexus. As the match progresses and the life points become lower, the music will change as well. For this map, players don’t really have designated lanes or roles. If anything, teams will often send a single player to the bottom capture point and the rest would head for the top capture point.

– The Howling Abyss holds an ARAM mode (All Random All Mid) that was created by the community. Players don’t get to choose their champions and the map is a single lane. The game mode was first played on Summoner’s Rift where all the players would send their champion down mid lane and no other lanes would be used. In this mode, everyone basically beats on each others’ faces. 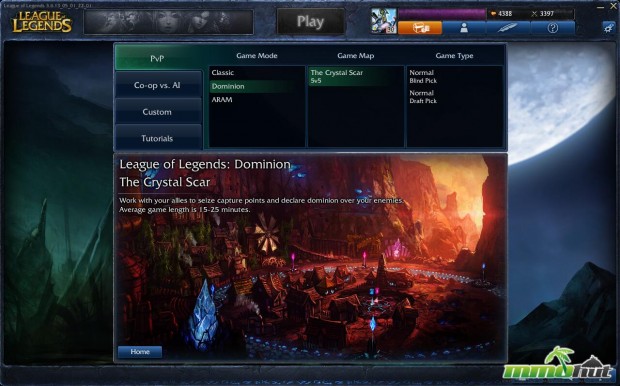 – Most of the time, tanks will be hold the same idea as tanks from other games. Their role is to jump into the thicket of things to get things started and to get the attention of opponent champions. Not all initiators are tanks but the idea behind this role is to start a team fight or to start an engagement with the enemy team.

– Most games will have a jungler in them. A jungler’s role is to clear their team’s jungle for experience and to gank whenever an opportunity presents itself. The jungler will be the main ganker for most games because of the constant surprise of the jungler not presenting himself/herself to the opposing team. Basically, this role allows players to be an unwelcomed guest.

– Most games, there are two much defined roles. These are the ability power (AP) carry and the attack damage (AD) carry. These carries are often the champions that have the least defenses. The sole purpose of these roles is to deal raw damage to the enemy team. It’s important for these players to stay alive the most as they are needed completely for every late game engagement. For this to happen, most carries need the other players on their team to help keep them alive to do their carrying duty.

– The role of a support is to keep their allies buffed, healthy, and ready. Supports are often the players that need to keep a look on everything. It’s important for supports to constantly be on alert to avoid being caught and constantly be on the lookout for an opportunity to attack. Basically, a support’s job is to hold a player’s hand and lead them to the toilet at night.

Runes & Masteries
In League of Legends, there are runes and masteries that allow players to give small advantages to their champion. These small advantages could be just the things that players need for their champions. Masteries are free buy more mastery points are earned as players gain levels. Runes are obtained only by the use of influence points and may take quite a while to collect if a player is new. A player is given two rune pages for free; to obtain more, players must purchase them. Players may have up to twenty pages of masteries and runes. Although certain masteries and runes are recommended in certain situations, they’re a matter of a individual’s personal choice.

RP & IP
RP is the abbreviation of “Riot Points.” Riot Points are only obtainable through using real money. RP allows a player to purchase champions and champion skins. It also allows players to purchase more rune pages, boosts, bundles, and ward skins (during special occasions). However, the RP cannot be used to obtained runes. Players are also allowed to purchase or use RP to gift other players.
IP is the abbreviation of Influence Points.” These points are earned after every match and are used for champions, ward skins (during special occasions), and runes only. To provide a sense of equality, players may only purchase runes with IP to avoid any in-game advantages. 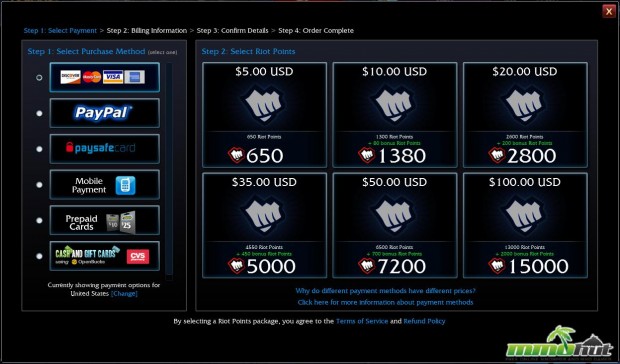 Tournaments & Championships
Due to League of Legend’s popularity, it has become one of the most played and most well-known competitive e-sports to date. Championships allow professional players to compete for a cash pool up to millions of dollars. There are small tournaments that are held by the community and by well known companies, like Alienware, to allow casual player to participate in a chance to win some prize money as well. These tournaments also help expand interest and player base by getting the name out to the public. 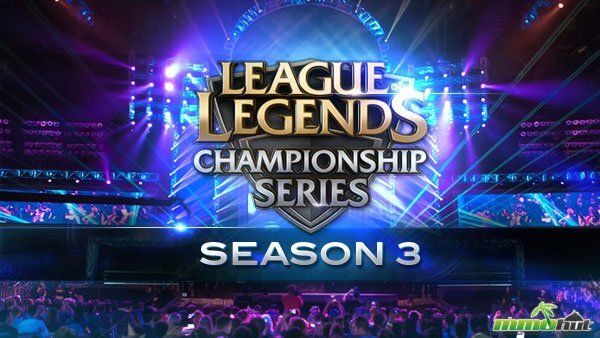 Graphics – 5/5 – The graphics are up-to-date. If certain champions are in need of a graphical update, it will be worked on. I personally think this is the strongest point of the game because of the constant attention to detail and graphics.

Gameplay – 4.5/5 – The only reason I would not give this a perfect ratings is because of the lack of unique gameplay features compared to other MOBA style games. The main difference comes from the increase in skill effects due to items.

Community – 3.5/5 – The community gives a lot of feedback and participates in a lot of events. There are a lot of people and constant suggestions and helpful information. The only issue is that due to the nature of competitive games, the negative attitudes of players gets brought out. This brings out a lot of terrible things being said and it adds a lot of complaining about “unbalanced” subjects.

Content – 5/5 – There’s at least an update every month and sometimes there are two big content additions. Players always have something to look forward to.

Support – 5/5 – Riot Games is fast to respond to the community about urgent issues. They are quick to e-mails and quick to act on any changes that can be made for their needy player base. Even if their maintenance do not go as planned, players are given constant updates.

Overall – 4.6/5 – League of Legends is in great hands and has a great community (when they want to be great) and I personally choose this as my favorite MOBA-type game. It’s easy to understand and still difficult even after playing for a while. As well as it is nice to see players pick up different strategies and adapt to new strategies.