There is a hush across the land. All you can hear is the low noise of the wind in these northern climes and the gentle sound of settling snow.

Closer to the shore there is the lap of frigid waves and the crystalline shock of ice splitting. All around you there is peace.

Kodan, having arrived on their mighty ships fashioned from ice, are finding the time to settle down. Brave, tall, bearlike people, they can work on carving out a sanctuary in this stillness. Finally the air, though the light still distorts through dragon ice, the air is like their own spirits. Strong, silent, ever present.

In the water around the Frostgorge Sound, Quaggan also finally know peace. No longer are they faced with frozen and twisted remains of their own corrupted brethren or warped fish. No longer do they panic and fret their little roly poly lives away. There is as much peace below the waves as there is above. A quiet blankets the land and nothing disturbs it any more. 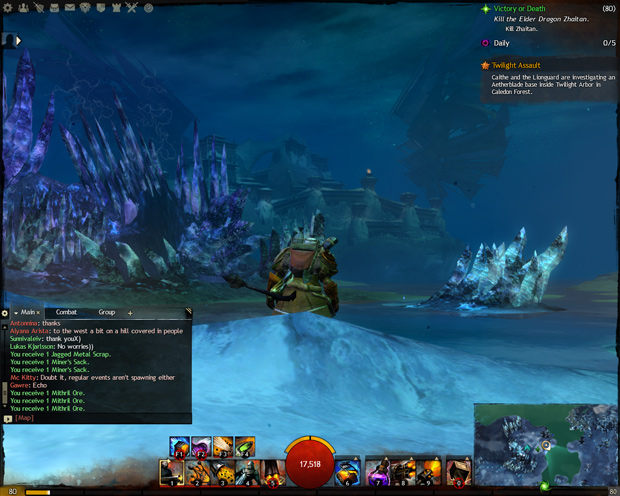 Across the world of Tyria there is a land that could not be more different. The green rolling hills of Queensdale are warm and inviting. Where Frostgorge sports mountains of snow and ice, Queensdale displays mounds with rolling paths and trees. Where the northern Shiverpeaks are frozen, this jewel of Kryta is warm.

Where there is silence now in Frostgorge, a final seeming victory of peace and righteousness over Jormag, here there are shouts and exclamations.

“No noob, Boar then spider”

These shouts echo over the land, crossing the full span of a map of Queensdale. Where once the villages had to fear the presence of champions, now all they must do is wait. Frostgorge has fallen silent but Queensdale roars with battle. Not indiscriminate slaughter, nor unfocused mayhem. This is the roar of industry, of what is lovingly called a train.

Like the finest Charr clockwork, heroes will descend upon these toughest foes of the land. A blurred mass of spells and weapons reduce even the hardiest champion spider or giant boar to a corpse in moments. On and on they circle through the land, never resting, never pausing, always rushing onwards.

The silence of Frostgorge and the noise of Queensdale lay at the feet of Arenanet. This is the price of progress. 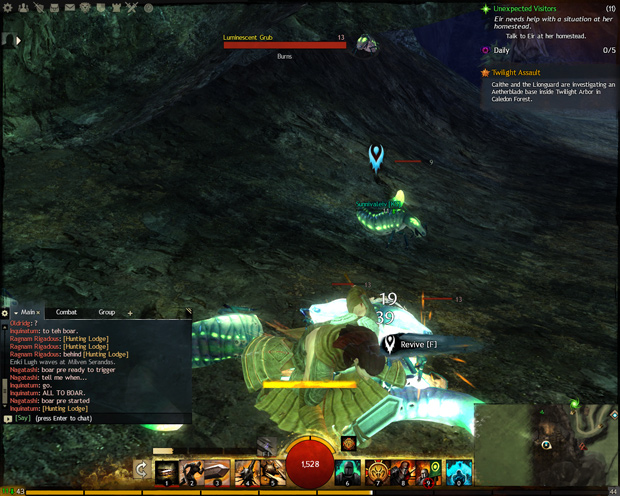 Florid prose aside, both stories are true. At my last check, Frostgorge Sound is truly won by the heroes. Specifically everything is dead. There are no mobs wandering the wilderness, there are no Champions to slay or hordes of Icebrood to fight through to resurrect foolhardy Kodan. Anything that gets killed by the forces of good seems to stay dead. There is silence there now, where once the train circles, there is an absence.

For anyone wanting to gather higher level resources, could you ask for anything more? A completely dead zone devoid of danger. Need Orichalcum ore? Ancient wood? Knock yourself out. It’s not just on my home of Piken Square, this victory over the minions of Jormag has allegedly spread to a number of servers.

On the flip side, I recently had a bit of trouble sleeping. So too did my wife and so in proper and sensible adulthood, we figured we’d log on and play. What else are you going to do at 5am after all? Map continued to bark out directions. No matter the time of day or night, round and round the train goes. Occasionally dramatic as people don’t follow the shaky leadership of those already on board, it never seems to stop. I have logged into Queensdale almost religiously in the past two weeks and any time I do, there they are.

The changes to magic find and champions mean no matter what level the champion they will drop a box of goodies. Sure it may not contain the finest loot on average nor the most interesting of crafting materials, but the law of averages will swing in your favour when you have enough. More often than not it will be useless tat but slowly and surely you will score gold and eventually success.

Both of these issues are troubling. First a zone that isn’t respawning? For days on end? ArenaNet is apparently silent on the issue. Perhaps that means, or if it is fixed before this is read it meant, they are hard at work on it. Maybe it’s an unusual quirk and the fix isn’t easy.

However the only reason I am even aware of it is because the “train” of Champion farming has stalled there. There is no progress for people on the finest of loot boxes because there are no mobs to kill. Maybe that has increased the riders of the train in Queensdale, maybe not. What it is though is two zones damaged by the decisions recently.

Ultimately, in my opinion, it’s worse than a bug or an unusual social construct. It’s a sign that the Living Story is a sham. 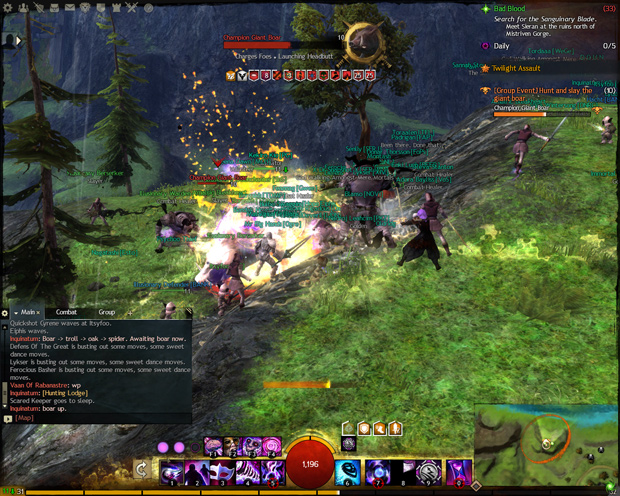 The constant train, which I can probably rightly assume isn’t just a Piken Square particular, has got to be having some small impact on the economy. Are exotics truly exotic rarity when they drop and are sold so frequently? Perhaps we should magically have the stats degrade on the item as the amount available increases.

The zone sitting without a fix for even more than a day, or if it is complex, without an announcement? ArenaNet has stretched themselves too thin with the Living Story update schedule.

It may be time for ArenaNet to take stock of where Guild Wars 2 is and where it is going. This pace that they have set has its problems, clearly. A slower progression into the future could be the way to go.

If not that, then they need more people on board. They need to react faster to bugs and squash them.

Otherwise this is the world we are left with Tyria. An endless meaningless merry go round on one extreme and the utter silence of a defeated and depopulated zone on the other.