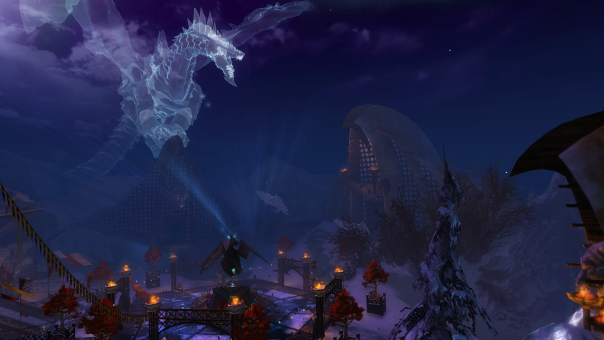 ArenaNet let me get a sneak peek at a festival that’s coming back to Guild Wars 2, and it could not be timed better – the Dragon Bash Festival! Want a peek at it? The footage below is my traveling about at the Festival! The Dragon Bash Festival celebrates something the people of Tyria never thought would be possible, and that’s defeating the Elder Dragons. Now that Mordremoth and Kralkatorrik have been defeated once and for all, and Aurene has ascended to the heavens, what better time than now to party? There are no threats urging the world towards complete annihilation and extinction (yet), so now we have a nice big party area to hang out in. The event lasts from June 25th until July 16th, and Hoelbrak will host the festivities. There are plenty of rewards you can unlock too, which are gained from simply completing events at Dragon Bash, but there will be some real-money purchases you can make – don’t worry, they’re all cosmetic.

Coming to the Gem Store:

I take a peek at most of these towards the end of the footage, and I have to say, I love the weapon set cosmetic, and the Skyscale Mount Pack (though I do not as of yet, own a Skyscale). The cosmetics for mounts are pretty damn gorgeous, and these are no exception. There are technically two currencies for this event, Zhaitaffy (which is a taffy candy), and Jorbreakers (purchased for 1,000 Zhaitaffy). Now, I know that sounds like a lot – it sure did to me, too. But after a half hour to an hour of play in the area, I had made well over 300 Zhaitaffy (and that’s with the 100 that I donated). Some of the Jorbreaker items you can purchase are a little on the pricey side (100 Jorbreakers at the most, that I saw), but with as much time as you have to play in this zone, I think it won’t be an unreasonable ask. The only tasks I did not complete was the Moa Race betting, and the Illusion Arena (but I did at least try that). I did not have the time to find the Race betting since I was under a pretty strict time crunch. Thursdays are hard, friends!

The Arena is located at Hero’s Compass and has players doing battle against powerful illusions of beasts and dragons. You can try this alone, but I personally don’t recommend it. Though I was new to the style of character I was playing, even doling out as much damage as I could, I think I reached 60% on the main fight. Take your friends, this is supposed to be a group encounter! Or join up with strangers and make new friends! That’s one of the most important parts of a festival, is making friends. This is a very challenging event, and sadly I did not see the rewards. I didn’t have time to group with the other press/Guild Wars 2 developers on this one. I imagine it’s at least as worthwhile as racing. That I definitely did.

You can also race, as I said! The races start pretty frequently, and it does not seem to matter what mount you ride on. Personally, I rolled my way to victory, because it just felt like the right call. My one regret is that I forgot how to drift because there is one VERY sharp turn on the track. Other mounts will have no trouble with it, but they lack the raw speed and power my Roller Beetle has. You go a few laps, and whoever comes in first wins the most Zhaitaffy. I won a nice pile of Zhaitaffy from doing it, and it was fun! In the race, the track is highlighted by small glowing domes that you have to pass through. Failing to pass one means you have to go back and hit it (think Superman on Nintendo 64) to proceed. You have about ten minutes to get to the finish line, and I managed to win somehow, despite my many leaps off the track. Honestly, this event was a lot of fun! This is the first festival I’ve done in Guild Wars 2, and I had a blast. The zone is absolutely gorgeous, and the illusion of Kralkatorrik lurking overhead was a nice touch.