Galactic Supremacy is an MMORTS brought to us by indie developers, Blue Turtle. Originally only available in French, it is now being ported to English to accommodate a growing interest in the game. It offers unique races, trade and politics-centered gameplay, and it is possible to play in your browser, or via Facebook. While the community for the game isn’t too large yet, those that are playing are quite confident that population will come with time. For now, the game seems to follow the recipe for a successful F2P-RTS to a T.

Customization isn’t a strong point of the MMORTS genre, so I can’t say I expected much. You do get some freedom when choosing your race, what technologies to research, or what building to build, but in the end you’ll more than likely end up with the same exact setup as everyone else. Of course, that’s true for most MMOs. If you’ve played a browser-based MMORTS in the last decade, you’ll understand what to expect. If you haven’t, don’t be surprised by the lack of options. 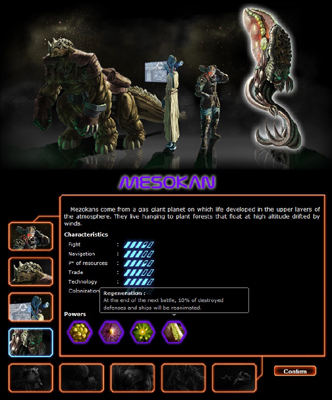 We’re starting to enter the era of 3D Browser-based MMOs, even for RTS. That’s why it’s getting harder for me to review a game’s graphics; I’m not sure if I should be expecting a higher quality or if I should be OK with 2D graphics from the last generation of games. Personally, I don’t mind that graphics in Galactic Supremacy. The artwork is well done, and it’s pleasant to look at. However, there is a limited amount of it, so after a while it can get repetitive. In the end, I suppose I have to say that I’m OK with what is available, but would have been happy to find more. 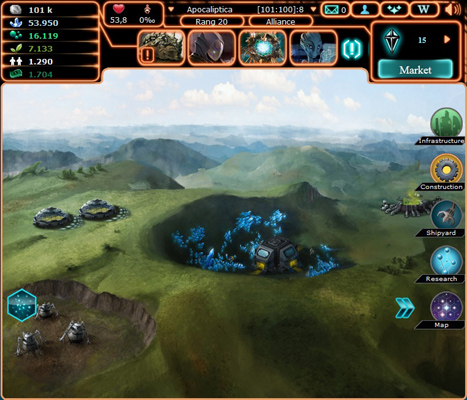 As far as I can tell, Galactic Supremacy is completely controlled via the mouse and I didn’t find any options (or reasons) to use the keyboard for anything. For the most part, the interface worked perfectly fine. The only issue I had was that some of the webpages seemed to lag a bit when loading which got annoying. It’s one of the reasons I wish modern MMORTS would adopt Java or something to develop their clients, so that I don’t have to reload the page each time I click something and then become annoyed at the slow servers hosting the game. But, other than the slight lag issue, I didn’t notice any problems with the controls.

Community is a massive part of this genre. In fact, it’s what makes or breaks the game. Unfortunately, Galactic Supremacy (at least for the English version) doesn’t have the biggest population yet. For the most part, I got the impression that the community was pleasant and most of it wants to be helpful to new players. Interacting with your fellow players will be something you do often, and typically your interaction leads to hostilities.

If you’ve played a browser-based MMORTS in the past decade, you’ll know what to expect from Galactic Supremacy. It’s basically the standard “gather resources, do some trade, build some armies, conquer” recipe that you’ll find in most games in this genre. A lot of the fun will not come so much from the gameplay, but from your interactions with your fellow players – forging alliances and destroying enemies. I’ll be honest from the start and say I didn’t really find anything too interesting in terms of gameplay in Galactic Supremacy, but I did find the backstory to be well crafted. If you’re new to the MMORTS genre, you’ll probably find this game to be fun, but if you’re a vet you’ll more than likely get a bit annoyed at how similar it is to other titles.

As with most MMORTS, you’ll start out with a bare-bones base that the tutorial will help you build up quickly. Building something requires both resources and time, with costs becoming higher with each level. Later on, this can result in extremely long build timers which, you guessed it, can be shortened significantly via real money. Using resources to conduct trade and create military units is also a big part of the game, as well. You’ll also be navigating the tech trees to give yourself an edge over other players, same as you would in any other MMORTS. 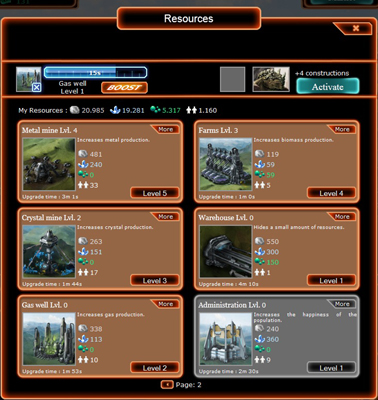 When not building up your base or military, you’ll be trading or fighting with other players. It sounds pretty simplistic when put like that, as it feels more diverse when actually put into practice. The thing is, you can have as little or as much interaction with your fellow players as you like. You can participate in the global chat, message your fellow players, make friends and enemies. Or you can go full anti-social and simply log in each day, finish up your in-game chores, attack someone and then log off if you prefer. I think this genre has such wide appeal because it’s the player’s choice as to how casual or hardcore the experience is. 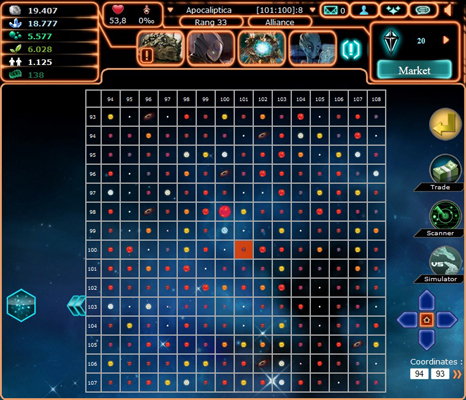 Conflict isn’t “real time”, but is the usual “choose a target to attack and the computer will roll some dice” type system. It kind of makes it confusing when the game is considered an MMORTS, but there isn’t much “real time” in it at all. Essentially, combat will consist of building up military units over time and then sending them to attack someone or something and then your troops will carry back the spoils of war for you to make use of. As with real life, most conflicts come about because you’ll want easy access to more resources, and that’s about all you get from fighting with other players. If you’re looking for something more exciting and strategic, you won’t find it here unfortunately. 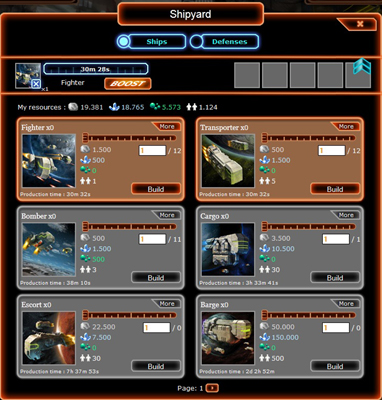 Galactic Supremacy doesn’t bring anything new to the table. It does have an interesting backstory with some unique races to choose from, but not much else going for it past that. While the game is fun, if you’ve played an MMORTS in the past you’ll find yourself having a sense of deja vu. Artwork is well done and the UI is nice, but load lag can cause a bit of a headache over time. All-in-all, playing Galactic Supremacy is an OK experience and I would suggest it to you if you’ve never played an MMORTS before, but if you’re not new to the genre I can’t say you’ll find anything particularly unique or interesting to keep your interest.