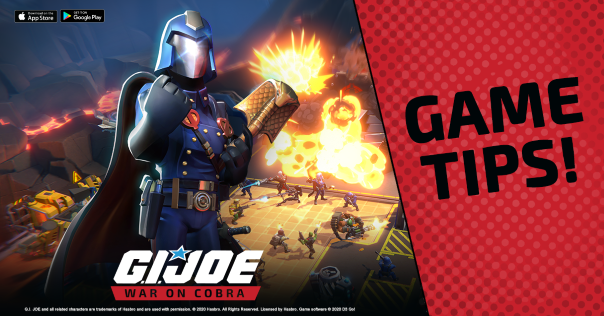 Official tips from the G.I. Joe War on Cobra team to help you dominate as Cobra!

Make sure to also check out our general tips, along with a special giveaway for new players who sign up through our link!

There’s More Where that Came From!

Cobra thrives on damage and they are willing to do whatever it takes to ensure total destruction, even at the cost of their own troops.  Enter the B.A.T Squad!  These cheap, tanky units are perfect for placing at your front lines to take all the damage!  B.A.T Squad defeated?  No problem!  At 2 AP you can continue to bring a steady stream of these expendable troops while their superiors destroy everything in sight. Don’t forget to resupply your B.A.T squad after the battle so they can keep taking damage for you again and again.

An early game vehicle with so much versatility is the infamous Stinger.  This 4WD vehicle packs a punch with an armored hull to keep it alive.  Assign a hero to the Stinger in battle and you gain access to the Stinger’s missiles to help clear the skies and deal heavy damage to your opponent’s base.

Get in the Action!

Action Points are required to deploy your army, so you want to ensure a steady income of these as your destroy your opponent’s base.  More Action Points means more units means more damage and destruction!  Destro is gonna love this, and in fact adding him to your squad and deploying him in battle will make sure you get even more Action Points!  With his ability ‘Arms Empire’, any building destroyed while Destro is on the battlefield will yield extra Action Points.

Overwhelm Them with Numbers, but Watch Out!

Being expendable means bringing more to the table, and Cobra definitely brings more.  Many of the units you can add to your Cobra squad cost less Action Points and consist of multiple units, so deploy them all and overwhelm your opponent with swarms of units!  Send in your B.A.T Squad, Cobra Troopers, Incinerators, and Saw Vipers and watch them bring the overwhelming pain.  Be sure to watch out for Heavy Artillery and Rocket Salvo as those buildings cause devastating area of effect damage if not dealt with properly.

Attack Them From All Sides!

As you push forward and conquer your opponents, pay attention to where they have set up their defenses.  Use Air Vehicles like Black Dragon and Mamba to attack them from the skies, or bring your Moray or Mantis to the sea to destroy their oil reserves and steal those resources for yourself.  Don’t forget to bring your Command Cards to call in a bomber from the skies with your Area Strike, or temporarily take control of an enemy building with Hack Turret and force it to attack its own base!