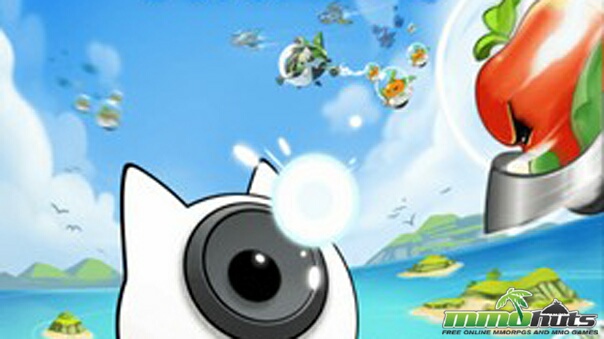 While mobile gaming has been a booster seat at the big kid’s table for video gaming, it’s also just as obnoxious. The games are colorful, draw attention to themselves, and often are the most awkward gaming experiences a gaming veteran can encounter. It’s no wonder that we’ve grown indifferent to them, only bothering to give a game a glance if it has one of our mental buzzwords (Did someone say Fallout?) or when one of those persistent friends or family members nag you with invites until you relent. In fact, when it comes to mobile games, we often wear our non-participation like a badge of honor. For instance, I’m still proud to have never crushed candy.

Perhaps I’m feeling a little snarky because one MMO publisher after another has slowly succumbed to the temptation of producing handheld gaming bait. To be clear, I’m not referring to games thoughtfully designed for mobile, like Vainglory or Orders & Chaos Online, or even logical ports like Forge of Empires. No, we’re talking about MMO companies jumping into the dirty ball pit of mobile gaming, full of energy walls, pay gates, and bribes to connect the game to every social network you ever existed on. It’s an easy pit to slide into when producing online games, but that doesn’t ease my sense of disappointment.

But let me step down from my soapbox and cut to the chase: En Masse has joined this group of publishers with its first mobile title, Fruit Attacks, and now a second title, Pocket Platoons. While I can’t explain why Bluehole’s western branch has jumped from playing Lolicon in TERA to destroying space fruit, I can at least break down what Fruit Attacks is all about and let you decide if it’s worth your time. 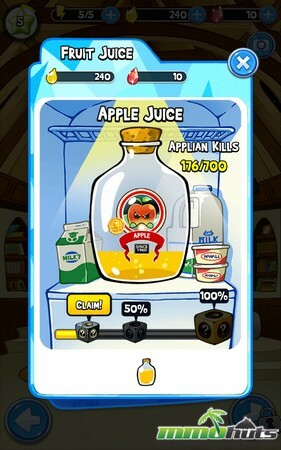 Fruit Attacks is a 2D, arcade-style skill shooter. Players are charged with defending the earth from invading fruit-aliens by using robots known as SATIs, along with mini-SATIs and additional power-ups. Invaders appear on screen and approach the bottom in different patterns, and SATIs use sound attacks to eliminate these evil fruit before the shield protecting earth is destroyed. Stages are split across Episodes and Acts, and also come in a variant “Nightmare” mode for the veteran players ready for a challenge. As can be expected, a few boss battles are also staggered along the way.

Players also get access to their own Home, a small room which can be customized with cats (used to fetch currency in timed hunts) and a small assortment of furniture. At home, players also can access their refrigerator, where fruit kills are bottled up to make juice. At certain fill levels, players can empty their juice container in exchange for mystery box rewards.

Though players start with only the default SATI, Dolbi, additional SATI can be unlocked through collecting blueprints (found as loot in a shell game at the end of the stage) or through purchase with either of the game’s currencies. Each SATI has an innate skill, which serves as their basic attack, and a vibro-skill, which is powered up during the stage limit-break style. To activate you need to shake your phone to get the motion sensitivity to set the ability off, which was one serious game of finger twister considering taking screenshots for this article involved pushing the power and volume button at the same time as shaking my phone! Though mastering this finger twister is needed for tackling tough stages, at least with a current range of six SATI available on the game’s release. 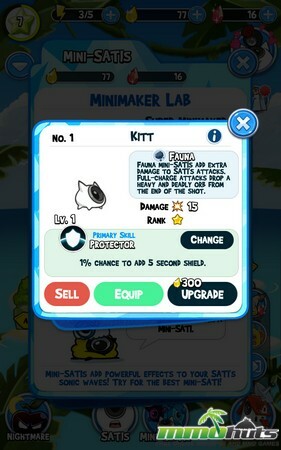 SATI options and customization is a bit limited.

Mini-SATIs can be discovered through looting spare parts to build them in the Minimaker lab. Here there is a random chance of obtaining an assortment of these little fellows, which act as mini-pets and boosters to the equipped SATI. Like SATIs, Mini-SATIs have two skills. The first of these is a predetermined boost ability to the SATI, such as adding an additional drop-shot to a fully charged SATI shot. The second is a randomly determined passive bonus which might grant extra defensive or offensive bonuses. Mini SATIs can also be fused together to create more powerful versions of themselves, although this becomes rather costly.

Besides a basic upgrade function, and the ability to mix-and-match one SATI and two Mini-SATIs when entering stages, there isn’t much to speak of for customization. Bots only level when they’re upgraded and do not gain experience on their own. In fact, the Home option has arguably more upgrade functions even if they are equally as limited. It’s a shame that there are no ways to, at the very least, cosmetically alter your SATI collection.

The real charm of Fruit Attacks is in the gameplay itself. Rather than a ‘tap to shoot’ or simple aimed shot system, the game uses a “hook shot” system. Using both thumbs (or whatever two fingers are the most comfortable or convenient), players create a path for their SATI’s attacks. Each finger controls a point on the shot. The first point will be straight from the SATI outward, but the second point will create an arced path from the first point. 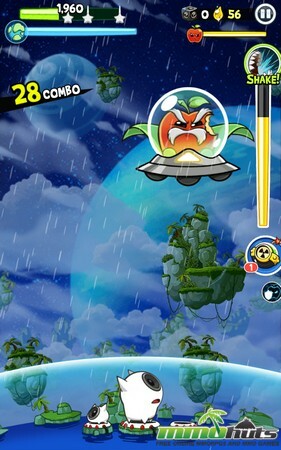 For a phone game, action is fast and intense.

This allows for some rather creative skill shots, as you can use the screen to twist and arc your shots just so before letting them go. Shots can (and should) also be charged by holding the fingers on the screen until the shot has reached full power. Some enemies take more than a weak shot, and each enemy comes in with its own formation, so beating each stage is a matter of increasing skill and familiarity with the attack system. This is, and remains, the most impressive feature of Fruit Attacks, enough that it makes up some for other lackluster parts of gameplay.

For the social mobile gamer, Fruit Attacks is limited: in fact, the game has essentially no multiplayer elements outside of leaderboards, and even those are limited only to Facebook friends. I’d guess that, coming from a studio so focused in online gaming, we’d see more multiplayer elements than this, and perhaps they are simply in development to be released in a future update. 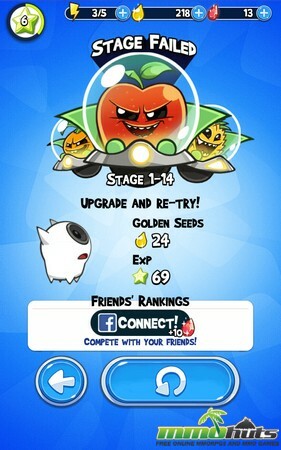 Fruit aliens don't play around. Expect to lose if you're not on your A-Game.

Otherwise, Fruit Attacks is colorful and charming, with an upbeat soundtrack and silly game sounds that fit the ridiculousness of destroying fruit aliens with robots that attack through sound. The gameplay is fun and engaging, and there’s a moderate amount of depth in managing your SATIs and Mini-SATIs for optimal juicing. The game isn’t without its vices though, particularly its incredibly steep costs for upgrading everything that will have you either grinding or opening your wallet by the end of Episode 1.

Altogether, Fruit Attacks is a good quality arcade-style game – just don’t expect too much out of it as a free-to-play mobile game.

Features (4/5): For an arcade-style game, Fruit Attacks has a pretty good variety of features. Each offers enough depth that there’s more than just stage-clearing to work toward.

Customization (2/5): Very basic progression system for SATI. Mini-SATIs have more depth in their random passive abilities and fusion. Cosmetic upgrades are only to be found in the Home section.

Control (5/5): The ‘hook shot’ dual-finger shot system makes every shot impactful. There’s no brute-forcing your way through stages: winning is a matter of skill.

Community (1/5): There isn’t any real community to speak of, even outside of the game, and the only multiplayer is comparing scores with Facebook friends.