There’s no better time to lift an NDA than a Superbowl weekend – when thousands of disappointed sports fans turn their TVs off because their favorite team didn’t make it to the big game. So it was this past weekend when Sony Online Entertainment lifted the NDA for EverQuest Next Landmark’s alpha, giving the public a reason to rush the fields and fill the virtual stands of livestreams to get their first glimpse at the upcoming F2P world-building title. I’ve thrown on my own proverbial jersey and got in the game to give you a glimpse from its first week in the public view.

One small disclaimer: EQN Landmark is in alpha, which is testing speak for “expect everything to be broken today and fixed sometime in the future.” 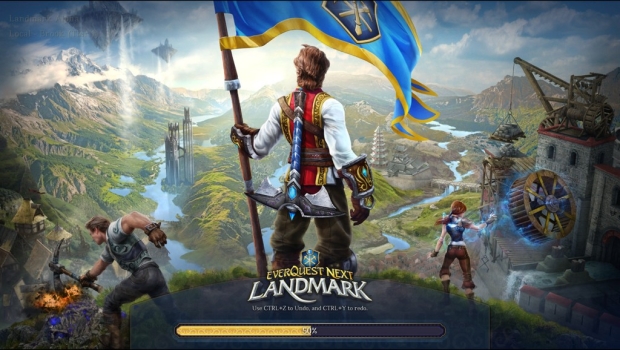 EverQuest Next Landmark is a sandbox-style MMO with world-building tools, and in its current state, is comparable to a multiplayer Minecraft on peaceful mode. There are no monsters, PvP, character equipment; all of these features (and many more) are on a long list of things planned for release by closed beta. What I was able to test is the skeleton of the game’s resource, crafting, and building system. Everything else falls under the “not yet” category.

To understand the way Landmark plays, you have to start at the basics of server structure. Each server is its own set of worlds, or “islands.” At the center of each island is a hub that includes a basic crafting station, useable by the public, and a portal spire. From the portal, you can transfer to other “islands” on the server. Each island is named and ranked by Tier, indicating the kinds of resources that will be available on the land. Currently, island size is such that it takes approximately ten minutes to run across the map from one edge to another. 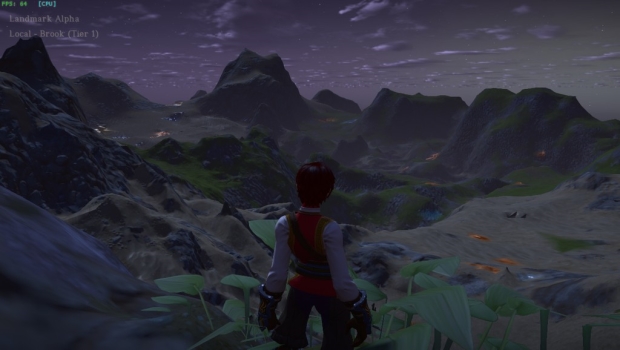 Each island is also capable of supporting a moderate number of player “claims,” which are territory grabs that mark an area specifically for your building needs. Each claim is then surrounded by a buffer zone in which other players cannot place their own claim. As such, most players’ first order of business is searching the map for an area in which no buffer zone exists, traveling to it by foot, and then staking their claim to have their own personal hub and building area. Eventually, claims will require an upkeep fee, so owning multiple claims will be costly.

The idea of having a limited number of claims per island – plus a buffer zone – is a great idea in theory. It keeps islands from being cluttered housing districts, where one can barely find a patch of resources between two fortresses, and it keeps both island and server populations balanced. Two glaring issues stand out in the current alpha phase, however: map interface and claim availability. 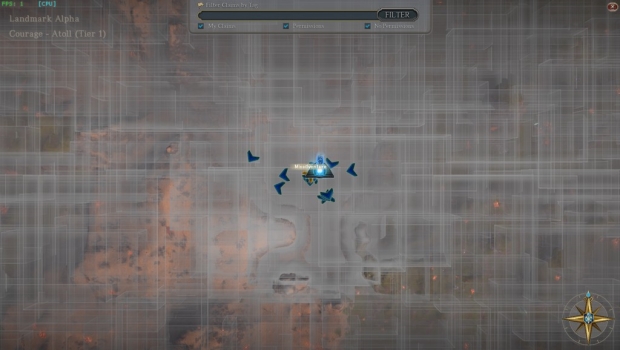 As you can see from the screenshot, the map displays both player claims (small squares) and buffer zones (large squares). While player claims cannot be set up inside buffer zones, buffer zones can overlap – there is no defined grid upon which players must place their claim. Searching for claim spaces on an active island is a matter of tediously scanning through the map to look for places where there isn’t an overlay square. On top of finding an open place, once you trek out to the spot – which may take a good five minutes of your time – you may even find that while the claim spot itself is useable, the island itself has reached its maximum number of claims. This means a trek back to the central island hub, another teleport, and another hunt through islands just to claim a small area all your own. Thankfully, this system will be changing to an easier to read color-coded map in the near future, although the issue of transportation remains up in the air.

What the system is lacking is a way to naturally expand and create additional islands for players in response to player populations and land claims. Once a server has reached maximum capacity, there’s no way to know, and no creation of new islands to accommodate for further claim needs. If the system is to work, it must automatically adapt to player populations, in similar ways to The Lord of the Rings Online’s housing system: once islands fill up, new ones must be born to allow for new claims and claim rebalancing. If such a system isn’t put in place for the game, the game will struggle between “haves” and “have-nots”, because without a claim of your own (or a friend to share), progression is impossible. 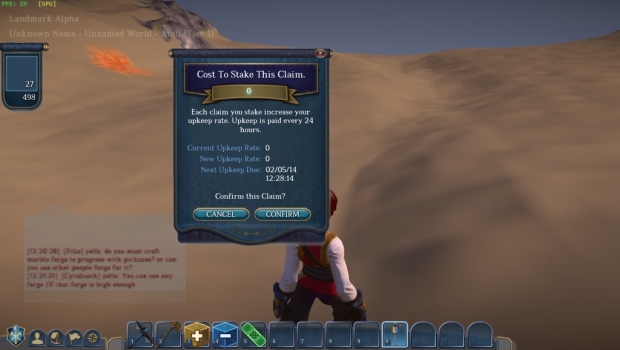 On the third day, and by the grace of a new server opening up, we were able to stake our own claim on the edge of a desert cliff. Before staking a claim, I was only able to wander the world and gather materials, but using these materials is limited to what the island hub’s crafting station offers: picks, axes, and the ability to craft your own stations to carry with you to your eventual claim of land. Having a claim meant opening up the game’s progression further, by being able to access a wider range of crafting items (in addition to being able to build cool stuff, like your own buildings).

As mentioned earlier, the game’s resources are split into tiers (Tier 1, Tier 2, etc.). In order to gather higher tiers of resources, you must craft tools that can gather them; for instance, in order to mine iron, you must craft and use a bronze pick (made of copper and tin). Rarer resources also allow you to craft more items for your homestead. Crafting progression, then, means gathering resources until you have enough to make the tool for the next tier, and then repeating each progressive tier. 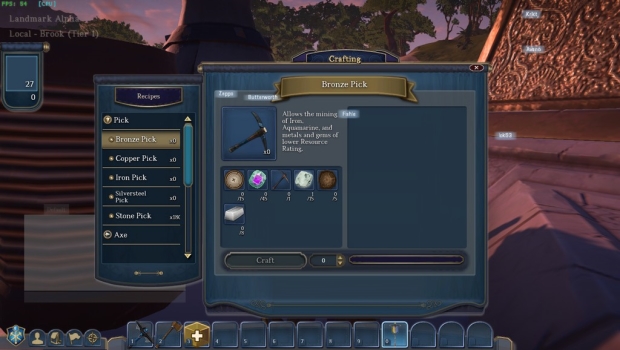 Of course, it’s not quite that simple. Materials in each tier are sorted into common and rare types: for example, in addition to finding copper and tin (both common), you will also rarely obtain elemental copper and elemental tin. You cannot progress without obtaining rare materials — a resource you have no control over other than to simply mine or chop away and hope for your luck. On top of that, the material resources required are fairly steep, a thought that amused me while I chopped down over a dozen large trees just in order to make my next pickaxe. While grinding resources may be an issue, at least resource competition seems fair. Even on a busy island, there’s plenty of resources to be found.

For those of you transitioning from games like Terraria or Minecraft, you’ll find the game’s building system refreshing. Landmark’s building tools seem more like Photoshop tools than world building magic: Add, Delete, Heal, Selection, Smooth, Paint, and Line. However, these tools are also a lot more powerful than you might be used to. Tools show as a 3D “brush” in the world, and can be scaled, tilted, and manipulated in ways that might make you feel like a real 3D artist. Material selection is simple, and both shapes and patterns are available in the game to make it even easier to lay down your creations or replicate complex work. The difference is like moving from LEGOs in the living room floor to red clay in a ceramics studio, and it can take a little getting used to for those of us who have spent years laying down block after block. That versatility is going to set new expectations, and it’s also going to draw in new players – players like those in my own family, who put graphical realism at the top of their gaming experience. 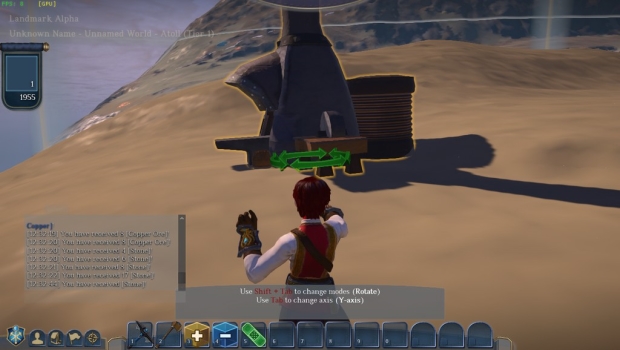 It’s obvious to state that EverQuest Next Landmark has the potential to be something great: in its infancy, the game is as moldable as the terrain it offers players. There’s plenty of criticism that I could throw at the game, including poor optimization and lack of meaningful content, that can be shrugged off with the “it’s only alpha” excuse. At the same time, there are a few core gameplay mechanic choices currently made by SOE that are possibly preparing Landmark for a rough release.

Island population mechanics are certainly a core issue that needs to be examined and tested as the playerbase grows throughout testing, or servers will struggle to keep land available for new players and veterans who want to open multiple claims. These issues may also result in a struggle for “prime” land, as players get frustrated that their only options are always on island edges. Transportation options also tie in with this: there is no magic teleport to one’s claim or to the central hub, and all transportation must be done by foot. Amusingly, walking across an island is an easy feat; players are capable of scaling massive mountain peaks with all the grace of a steed in The Elder Scrolls: Oblivion (that is to say, there’s no mountain you can’t climb.) Moving from area to area is so mind-numbing that you can use auto-run to run from corner to corner, and only be stopped if you happen to get caught in the roots of a tree or in the corner of someone’s building. And, of course, there’s the resource grind: never say Burled Wood to an Alpha player. 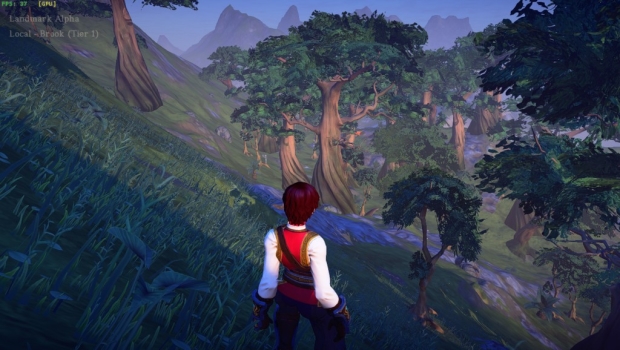 There’s also plenty to like. For those looking for a more 3D, realistic world-building experience, Landmark’s tools are far more powerful than other comparable games. Landmark’s inventory is also beautifully designed, as resources shuffle into their own inventory area and can stack by the thousands, leaving the main inventory free for tools and other useful items. Population and resource balance is already under control, and the list of features to be added is making my hands itch despite the week of headaches I had in alpha.

There’s one last question I’m sure some of you will be asking: should I buy a founder’s pack? Here’s my honest answer: if you’re really invested in EverQuest Next and EverQuest Next Landmark, and want a chance to make an impact in the game’s design and watch it grow from the start, you’ve probably already bought the Founder’s pack or are waiting for your next paycheck to do so. If you’re simply looking for a good sandbox game, there are plenty of world builders and MMOs available for less than the price tag of Alpha; in fact, Starbound is in early access and has more content (and stability) than EQN Landmark for less than the cost of the Settler’s Pack. That pack, by the way, is only $20 and guarantees you a slot in closed beta, and is probably the best option for those of you who, like me, are caught in the middle.