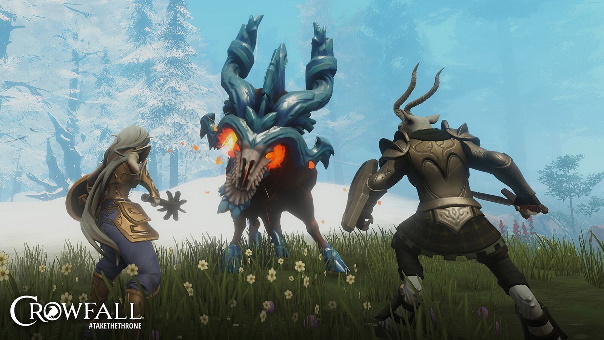 A third world type is coming to Crowfall today, “The Infected”. The Infected is a mid-range PVP world, and players 15 and above have a medium-risk/reward environment to do battle on. It should be a nice change of pace, between the safe areas of God’s Reach and the brutality of The Trials of the Gods. The idea is to create a breathing, changing universe, and not simply a series of replicated shards. Each world will have unique maps, rules, and rewards. By offering The Infected, players will have another option to decide how quickly they want to advance, and how much danger they wish to take on.

The Infected world includes a combination of safe PvE areas and claimable PvP territories, with rewards commensurate for both. The game of territorial conquest is perpetual, here, with worlds that never reset; giving players a more dangerous (and lucrative) path than the God’s Reach but less brutal than the Trials. The Infected world includes one ‘resource’ zone, located in the center of the map, accessible only via strategy worlds. Resource zones become the center of the conflict as players compete for valuable resources with everything from wild beasts, to enemy combatants. The world will feature three Keeps and six Forts to battle over, and players will need to use tactics to gain and retain the Strongholds, which are used as respawn points.