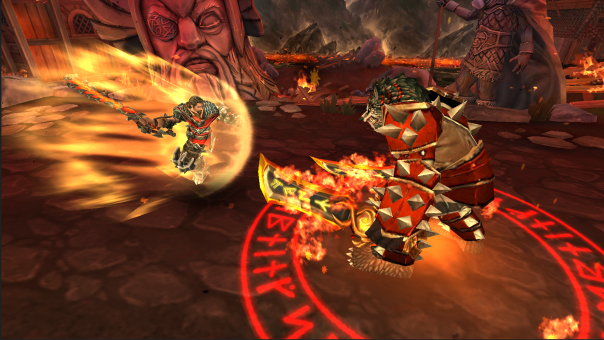 Today, the latest action game from nWay (developers of Power Rangers: Legacy Wars), ChronoBlade has officially launched. A modernization of the 2D beat ’em up, ChronoBlade enhances the genre with skill-based cooperative action, and smooth controls necessary for a strong beat ’em up. Players can link up and battle in ChronoBlade’s seamless PVP combat mode from nWay, built with the company’s extensive knowledge of networking, obtained from the success of Power Rangers: Legacy Wars. Every match’s intensity is amplified by the customizable equipment system and varied move lists, transforming each of the four characters to whatever the user’s playstyle demands. The single-player campaign in ChronoBlade has players choose an interdimensional hero to lead through dozens of fantastical realms within the Multiverse, a stream of cutthroat alternate realities each with its own wild version of Earth. Each level comes with its own set of challenges that require careful timing and combo mastery to defeat the onslaught of enemies and bosses employing completely unique attack patterns. ChronoBlade’s fluid control scheme makes chaining together each characters’ set of 30 ground and air attacks a cinch.

“Millions of gamers play games on Android and iOS devices, and ChronoBlade stands among the best by delivering some seriously competitive PvP and expanded game mechanics that rival the depth of a top-tier fighting game on any other platform,” said Taehoon Kim, CEO, nWay.  “ChronoBlade’s lengthy single-player mode, customizable characters and depth of combos makes it more than a simple throwback to old-school games – ignoring this one means missing out on the most modern touch-up to classic beat-em-ups yet!”

You can find ChronoBlade on the App Store and on Google Play.