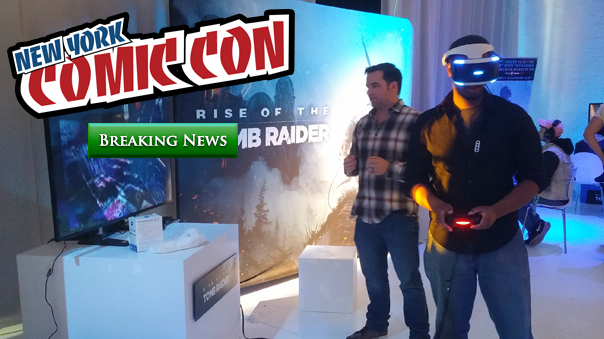 Probably the biggest and most surprising part of this year’s NYCC was the presence of VR technology. From the HTC VR, PlayStation VR to the Gear VR by Oculus, every bit of digital entertainment had VR available in some form or fashion. With my interest in VR slowly rising every single day (planning to pick up an HTC Vive myself sometime next year, even) I decided to spend an entire day focused on ditching the real world to escape into these surreal wonderlands, starting off with Rise of the Tomb Raider 20th Anniversary using PlayStation VR.

The PS4 re-release for Rise of the Tomb Raider will be including a new playable mission known as Blood Tides, which can be played regularly or with the PlayStation VR headset. Now this mission is not focused on the action and platforming gameplay that the series is grounded in, but instead focused more on exploration and puzzle solving. Playing as Lara, you’ll be running around an abandoned mansion left by your father and explore every inch of it in order to learn more about Lara’s family and her past.

With the PlayStation VR headset, I was able to look around freely in order to spot every inch of my surroundings. Moving around the playing field took me a bit of getting used to, however, as with most VR games, players will need to teleport from place to place in order to get around effectively. While it is possible to move around using your own two feet, you still have a pretty limited play area to work with, and unlike the HTC Vive that uses multiple cameras to map out your play area, its very easy to bump into objects around you in the real world.

As for the game itself, it was an incredibly moody experience as the mansion was filed with little details here and there that I couldn’t help but want to examine closer. At one point, I actually got down on my knees and attempted to stop and smell a flower that didn’t actually exist, which I’m sure looked pretty goofy doing with my friends watching.

Next up was the Lantern demo for Resident Evil 7, another PlayStation VR powered title by Capcom. This time, I managed to arrive to the convention on time in order to pick up a guaranteed access ticket. 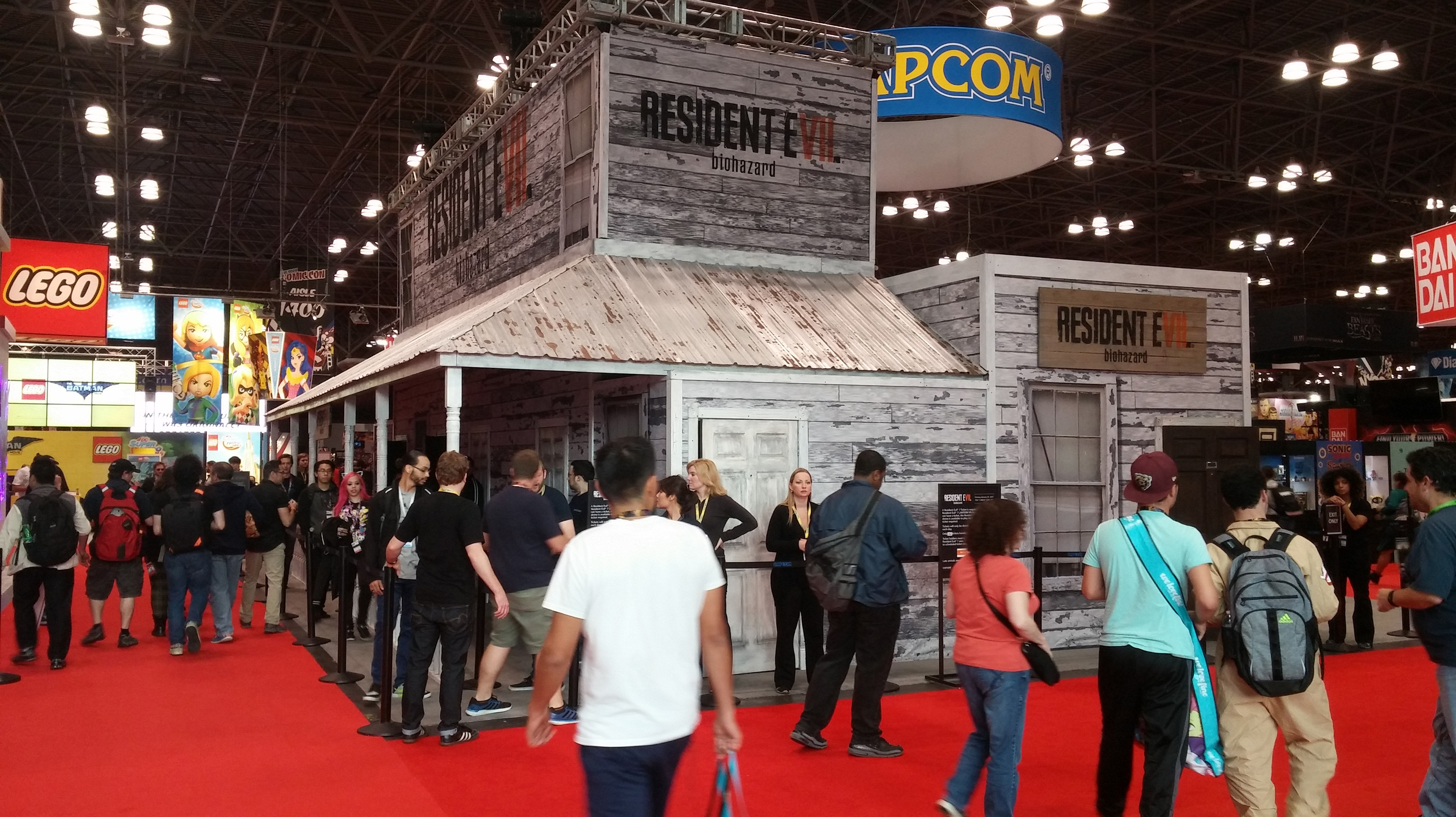 Now while this demo was presented as more of a sit down experience, I’m also quite certain that actual movement is also encouraged as you lean over balconies, peek into cracks in walls and whatnot. Still, I was handed a traditional PS4 controller to use and strapped in. In this demo, you play as an unnamed girl who’s trying to escape a crazy old lady and her even crazier family. Unlike previous RE games, this one is way more focused on survival than action, as I had no weapons to defend myself and had to spend most of my time hiding or running away from the crazy lady. Still true to the series, however, there was a small amount of puzzle solving where I had to match the outline of a spider against the wall in order to open a secret passage.

After bumbling around for a bit, I was eventually caught by the crazy old lady and then found myself tied up and forced to eat dinner with the family, with piles of mystery meat spread all across the table and flies buzzing all over the place. Luckily the realm of VR has not implemented Smell-o-vision yet, otherwise I probably would have puked my guts out from it all.

As for the impression I got from this demo: Personally, I didn’t feel all that terrified during the experience, even when the old lady tried to spook me by getting all up in my business after the lights shut off. Even the husband’s attempt at force feeding me a piece of mystery meat before nearly stabbing me in the face wasn’t that bad. After playing a handful of first person horror games for a while (and because I kind of cheated myself by watching the promo trailer for the Lantern demo), all the attempts at scariness was far too predictable. Still with the full release of the game and the fear of the unknown, I think they’ll manage to figure out better ways to utilize VR to make a truly scary game. Despite my lack of fear from playing the demo, I still have faith that Capcom will make this all work.

Next up, we move onto the HTC Vive to preview two new upcoming games, first one being the Rick & Morty VR game from Adult Swim Games. Now I’m a pretty huge fan of Rick and Morty and I easily believe that it’s one of the best shows to come out of Adult Swim in years, so I was more than excited to jump into Rick and Morty’s world for myself. 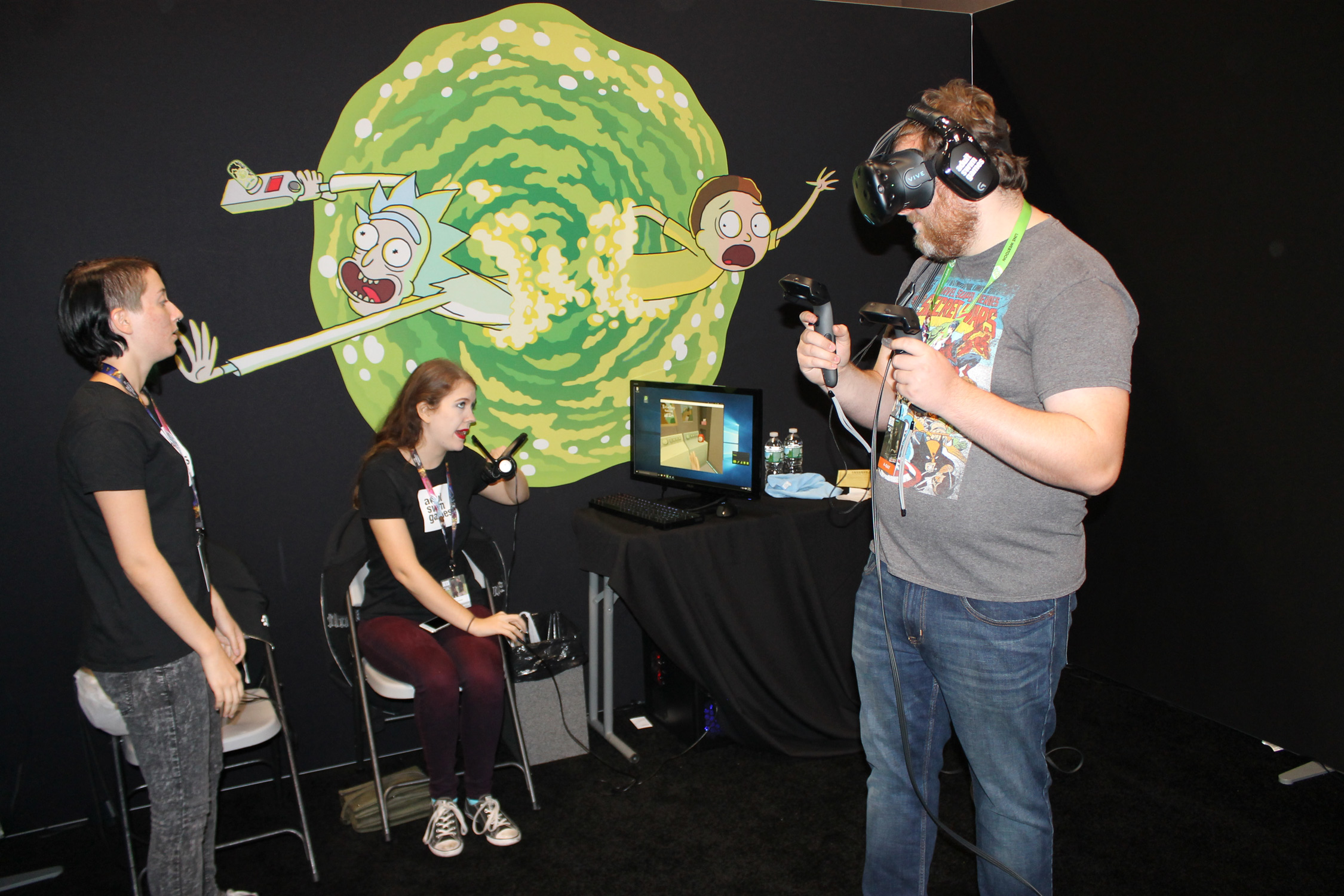 Calling it a game is a bit of a stretch, but it's certainly an experience.

After waiting on line for well over two hours, the demo starts with Rick telling me that I was one of Morty’s clones made to do tasks around the house, and my first task was simply to move laundry from a basket into the washing machine. I was still getting used to control sticks for the HTC Vive, so I was taking my sweet time trying to pick stuff up. I wasn’t sure if Rick was okay with me taking my sweet time, though, because after a minute or so, he pulled out his raygun and shot me down. Hilariously, I tried to dodge the shot, but failed miserably. After finding myself in purgatory for a bit, I somehow got revived and was free to screw around in Rick’s lab for a few minutes. Of course, the first thing I did was find stuff on Rick’s desk, ate some pills, drank Rick’s beer, played with the Plumbus for a bit and then smashed the hell out of everything.

Shortly afterwards, my fun was about to get “riggity riggity wrecked” as I looked outside of Rick’s lab to see that the world was about to be destroyed by a meteor crash, but then Rick & Morty appeared out of their usual green portal to try and “fix” the situation; by fix, I mean that they’re going to say “Screw this” and completely bail on this world just like in Season #1, Episode #6, so as I helped Rick and Morty open up a second portal, I actually kind of hesitated a bit because I had no clue what was on the other side. But once I did, I was sent to a dark world where there was only but Rick, Morty and a sign that showcased their upcoming game.

While this demo seemed more like a virtual toy than a game, the whole experience from start to finish was hilarious, with the humor of the show being spot on. I was told that there’s going to be way more to this game later on as players will have to do some puzzle solving by manipulating a second pair of hands on screen, so I’m really eager to try things out when the full game comes along.

There was so much VR stuff at NYCC this year that I couldn’t possible fit it all in this one article, so I’ll leave things off here. Check back for another look at all the VR stuff that happened at NYCC 2016. Catch part 2 of this article right here.