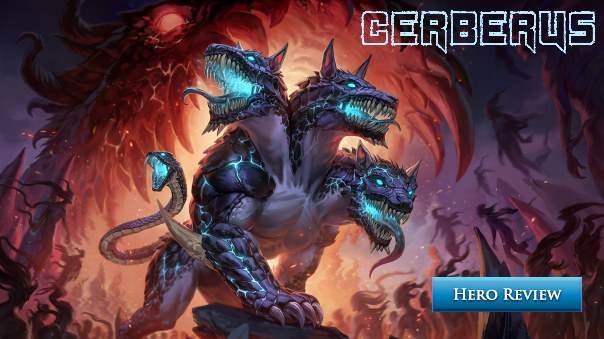 A beast of impossible animosity (but with a surprisingly dapper voice) stands across to the entrance of Hades. After you cross the River Styx, you may bypass this horrific beast should you leave the mortal plane, but god help you if you still have blood in your veins. Unless you’re Heracles (as wresting the beast out of Hades was the twelfth labor). He is a monster, brought into this world by the Mother of Monsters, Echidna (and fathered by Typhon), for no other purpose than to guard the gates of hell. There he remains, eternally chained to the shrouded passage. None of the living may enter. None of the dead may leave. He’s the loyal guard dog of Hades, and his ferocious, lion paws and poisonous serpent tail will pin down and demolish any who wish to leave the land of the dead. His job is very simple, and he is one of the Good Boys of Smite, as the latest doggo (people still use that, right?) to join the Battlefield of the Gods.

As HRX was fast approaching, we had to wait a while for a new god after Discordia, but they came out with a bang! Or a howl. Whichever. And Cerberus was definitely a much-anticipated and requested entity for SMITE. Thankfully, he’s a Guardian. I could see him being an Assassin/Warrior, but it makes the most sense for the Warden of the Underworld to be a Guardian. However, he feels … squishy. Maybe it’s just me. He’s only a point of physical defense under your average Guardian (19 instead of 20 like most of them), but he felt squishy to me. Some of that definitely has to do with every Arena Match being a mirror match, each with a Cerberus and thus a lot of defense-shredding going on, but I did not feel like he really came online until a few items into his build. I think there is a problem when your average warrior, like Hercules and Cu Chulainn, feel tankier/harder to kill than Guardians. But that’s another problem for another day.

Cerberus comes with a kit that does a lot without being incredibly bloated. Conversely, his kit also feels incredibly powerful, so it does a lot without doing too much. There are a few things I foresee being nerfed in the very near future, including his ultimate (the radius is kind of giant) and probably his defense-shredding. I think it caps at 60%? Whew. Now I like having a really aggressive tank, who can set up kills for his team, but he really doesn’t need them if he doesn’t want them. He does not need a ton of damage items, but can really get a lot out of some of them. So, one of the first things I considered was, “Can Cerberus Jungle?” since I try to look for fun ways to play a god out of their role in these things. So I tagged in our resident assassin/jungle expert, Trunath. He found that it’s “awesome in principle, not so great in practice”. His start is slow, possibly slower than even Loki’s. His ramp is pretty slow from the jungle, and his pre-5 is awful in camps. His stun is very hard to land in close proximity to all of those walls too, so I can’t see it being viable, at least not in ranked. I could probably see him going in the solo lane though and being a bully.

Passive: Spirit of Death (Buff, Heal Steal): Any time an Enemy God within 40 of Cerberus is healed, that healing is reduced by 20% and Cerberus receives 40% of the heal. This is pretty vaguely written, but I assume it is any heal, so Kali, Thanatos, any of the gods that can pump themselves to full health with an ability? That’s a feast for Cerberus and friends.

1: Paralyzing Spit (Damage, Projectile, CC): Cerberus’ snake-tail rises and spits a poisonous bile at his foes, and it passes through them. If Cerberus’ heads are alert, they too will spit, down into a triangular angle. All three heads are alerted by activating Ghastly Breath. Each head is also alerted each time an auto attack hits. Each projectile that hits the same target deals 20% less damage (50/80/110/140/170 (+25% of your magical power), but hitting an Enemy with all 4 Stuns them (1/1.3/1.6/1.9/2.2s). CD: 16 seconds

Cerberus does not strike me as being difficult to play, after spending the week with him. He’s listed officially as “Easy” and it certainly shows. He has a lot of crowd control options and very solid area-of-effect damage. While his own brand of CC is strong, people are certainly going to leap, dash, or move out of it in some manner, and as of this writing, there’s an easier way. If you jump (yes, just hit spacebar) at the right time, his ultimate will not hurt you. I don’t know if that’s “working as intended”, but you can simply leap into the air and get out of the way. While I feel he’s not as durable as some of his comrades, that’s why I see him running in a two-tank team. Personally, my dream is Athena/Ares (pick one), and Da Ji. You might beads one of their chains, but you won’t get through all of them. So Blink in, mash 4, get as many people as possible, throw them into position, Ares ults, or Athena ults and pulls them into Da Ji’s chains. But that’s just the tip of the iceberg. Any mage that has an insane burst move can be paired with Cerberus. Poseidon, He Bo, or how about Scylla? Nothing is more deflating I imagine, than having one Scylla ult kill your entire team.

His kit combos well together, but something I’ve been trying to do is avoid using his 3 as an initiate, and instead packing Blink. That’s because after I ult and throw their team into one spot, it’s gratifying to use 3, leap down onto them, hit 2, and as they’re running away, land that stun on the one that matters most. I’m sort of disappointed we didn’t find a safe, useful way to Jungle as him, but I’m sure a pro player will find the path we seek. Cerberus belongs in every comp, and his offer of sustain against players that build sustain is a wonderful idea. He’s the anti-heal, and there’s the potential that players might “counter” him by not buying as much lifesteal/using their healing abilities less. I doubt that highly, but it’s certainly possible. That would make healing items wind up being useless, and wasted gold is wasted time. But Cerberus is pretty simple to use. Find your targets, hit 2 to start the aoe damage, and now that all the heads are alert, pick someone and stun them.

Hopefully, your burst damage/assassin/hunter are nearby to obliterate that pick, but he really makes getting kills easily for your team as long as you don’t miss. He’s also got a pretty big body and can block shots for the team if you have the health to soak them. I personally never use the Paralyzing Spit/1 without having all the heads alert. It just isn’t worth it to do otherwise. But do be aware of his cooldowns, as they’re very long. None of them go down except his ultimate unless you build CDR (which you should probably build anyway). That’s another reason why I try not to waste the leap that is his 3, despite it having healing potential in Minions/Gods. That’s the major balancing point for him, that his CDs are pretty high so it’s important to not waste them. His ultimate has a surprisingly generous cooldown though, and I found it was up almost anytime I wanted it. Plus you can use it to throw people into your base in Arena, and onto the platform in other modes. And you know me… that’s the goal.

As a tank, I don’t feel like there are tons of options for me. I mean, there are lots of items, but some just feel more useful than others. I have a few thoughts on Cerberus though, some being squishier than others. CDR to me is probably his most useful stat other than sheer defense/hp. You want to be able to hit people as often as possible and one thing I was grateful for, is that I didn’t seem to run low on mana very often. He’s not one of those gods where you pop each ability once and now you need to use a mana potion. So what are the big items for me? Depends on the build, to be frank. Overall, one of the best items you can build on him in my estimation is Lotus Crown. It has Magical Power (handy), +60 Physical Protection (Amazing), and MP5 (a nice bonus). Plus your healing abilities that affect gods (that whole aura deal) will give Phys/Magical protection for 5 seconds. This will proc pretty frequently (not counting the 10-second wait). Another physical defense item I look to is Breastplate of Valor. Not a lot of builds I’m personally seeing use it, but I think it has plenty of stats that are viable. Physical Protection, CDR, Mana, and MP5 are all good picks. Rod of Asclepius pairs nicely with the Lotus Crown, with the increased healing potential on your abilities. It’s not so great on the defensive stats, so you’ll need a good magic defense item. This is where I’d go with Genji’s Guard for the Cooldown Reduction+CDR Passive and the +70 Magic Def, and/or Spirit Robe for good stats all around. I like aggressive items too, when I can, which is where Void Stone and/or Gem of Isolation come in. But if I pick Gem, I won’t get the Rod. Personally, I go for full tank builds, just tons of stats to be annoying and frustrating as long as I possibly can. But I won’t ignore the potential of a utility build. So let’s look at just a few build lists I have gone with. Useful Relics: Blink, Thorns, Slow, Shell, Heal.

I love Cerberus. In Arena’s he’s a monster, and will always be viable. There’s nothing stopping that. I can certainly see him being a ban pick in Conquest, simply for the presence and damage he brings to the table. Maybe not a first ban, but at least the first patch, he likely will be. I do like him to be paired with more beefy characters, such as Warriors, or a second tank. Or why not both? Warrior Jungle and Solo Lane Tank (throw Cab in there somewhere to make certain no one escapes). I don’t know that I feel like his damage is overwhelming, but I do know that the magical defense shred makes his power really ramp, even more so if he’s going to be in the midlane helping a god who might not have much early game damage (Discordia), or to help someone who is already ludicrously powerful infuriating (Raijin). Speaking of which, if Raijin uses his ult-taunt into Cerberus’ ult, I have a feeling those opponents are going to be stuck dying under Cerberus’ tower over and over again. He’s gratifying to play, and when you really get used to the weird shot of his fully-powered 1, he can really lock someone down. However, I do believe his stun needs a wider hitbox in order to make it worth using. It feels far too pinpoint. I can land them, but I’ve heard a lot of complaints that people think it’s buggy. I don’t know if it’s buggy or it’s just simply that hard to hit. I think it it’s just incredibly hard to land. Pair him with more CC and high-damage hyper-carries to ensure games are easy and fun (for you).