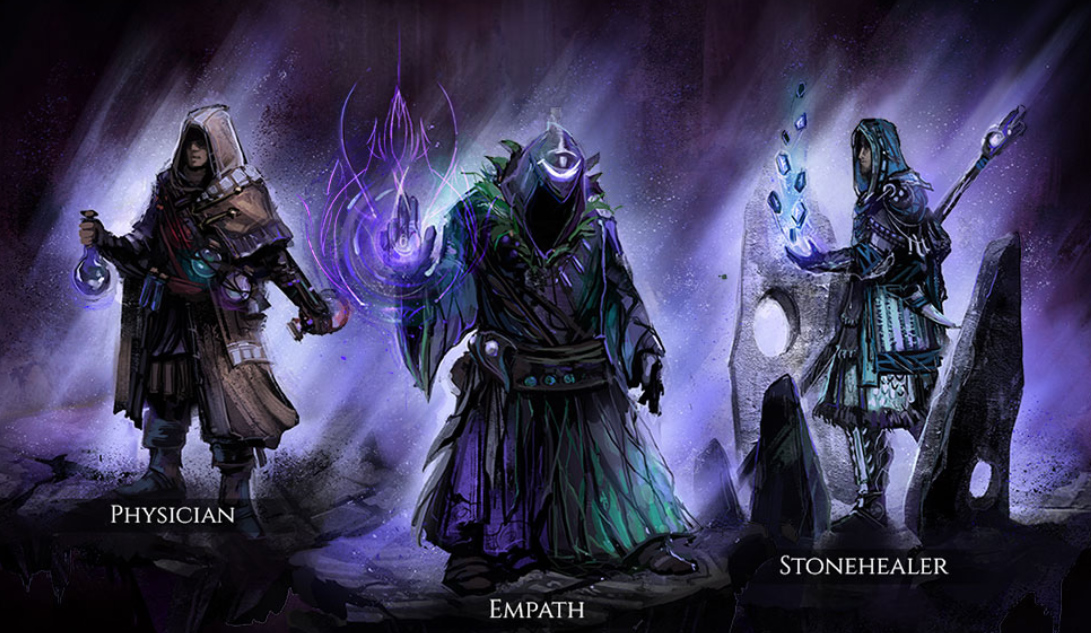 The 9th class archetype has landed for CityState Games’ upcoming PvP realm combat MMORPG, Camelot Unchained, and it’s caused quite a stir. After the hardcore fans of the community failed to position their comrades to vote for it after many weeks, we at last have an overview of the intended look and feel for Pure Healers. Before jumping in though there are some key components and subtleties that makes these healers possibly more BSC (bat shit crazy) than any archetype revealed prior.

Pure Healers are going to be VERY STRONG compared to what you will typically see a healer capable of in an MMORPG. However, they are also far more susceptible to being interrupted, and have less utility than most modern day healers to get themselves out of a jam. There will be penalties in terms of mobility or effectiveness, but the freedom to use heavy armor is a possibility too. This would likely be a matter of team/guild composition/intended purpose on the battlefield.

Characters can be wounded in individual body parts based on damage types they receive. CityState intends to give healers specialized UI for identifying this wounds efficiently so they can use their customized skills to focus their energy on that specific body part. While this may be a skill component system, a body part selection system, or something else yet to be revealed, it is indeed their sincerest wish to add this complexity to the process.

A veteran and skilled healer will stand apart from his peers because he has a giant skill bar and knows how to use it. Don’t expect to do anything more than slow paced field medic work if you’re rocking a 6 skill skillbar out there. A doctor that treats all maladies the same will rarely cure anything. It’s the same for Camelot Unchained healers.

Healers will be reliant on crafters for full effectiveness just like any other class. This likely means heading to town to rely on crafters to make the best beakers, runic stones, and heal boosting armor/robes to maximize your strengths. No free pass or coddling just cause you’re a special snowflake support!

Finally ranged healing is intended to be incorporated into the same physical projectile PhysX system impacted like everything else in the AIR system. This means there will be no hiding behind keep walls or heal botting allowed in Camelot Unchained. Healers will need line of sight and proper positioning to land heals at a distance, and there will be chances of heals failing due to external conditions. While this is VERY much a concern and topic of heated debate among backers, Mark Jacobs has made it clear that he will be going forward with this plan until testing in beta proves it unusable otherwise.

Now that the BSC part is out of the way, we can jump into the classes!

The physician is an unusually high risk character in the normally safe and organized Arthurian ranks. Between an above average hindrance from heavier armor and inventory, and a healing system that favors close range, this class is not going to be for the faint of heart. Physicians must find the safe pocket in battle to get up close to their allies to heal them, or chose to utilize their potions at range for a lower effectiveness.

The physician benefits greatly from proper planning. Their greater potions off limited charges, making every choice in an extended conflict carry weight. The more potions they bring to battle, the greater utility they’ll offer to counter a wide range of maladies. Plus their ability to sip their own potion for lesser effect prior to using it on an ally means that the wider the range of potions they bring, the more powerful they themselves will become.

While typical potion based classes in other MMORPGs tend to come with poisions to counter enemies, they don’t currently plan that for this class. You’ll have enough on your mind to keep your realm alive to be worried about poisoning your foes on top of it!

Empaths absorb the suffering of their allies to push TDD beyond their natural limits. This comes at a cost as an Empath under constant strain to reduce suffering will begin to take on greater burdens than they can bare. This makes the Empath both the most powerful healing archetype, as well as the one most vulnerable to interference from the enemy.

Curing wounds is mere childs play to an Empath as they can literally absorb an allies’ wounds into themselves, lessening the effect for themselves. Once their allies are wound free, further healing begins to rebuild the Empath’s own constitution as well. If an Empath has time to get established, they’re even capable of summoning a Simulacrum copy of themselves to draw health out of to fuel their magic rather than sacrificing their own blood and health.

Of course this self sacrifice becomes dangerous when the pressure is on. Empaths low on HP become less effective at healing their allies until they have time to recover. Those that take on more wounds than they can purify will begin to suffer and deteriorate badly after an extended duration. Masterful micromanagers will be needed to fully utilize the full skill ceiling of this intense class.

A staunch defender in stark contrast from the typically forward rushing offensive classes of its realm, the Stonehealer offers safe harbor for hit and run characters to pull back to for a breather. In typical Viking fashion, they scribe Norse runic symbols into stones to enable healing magics, with a heavier lean towards AoE effects than their rival realm counterparts.

Stonehealers operate best when they’re able to stay locked down in one location for extended periods. Like the Empaths, they’re able to summon an Odin Stone as a sort of healing turret to channel their most powerful magics through. The longer an Odin Stone stands, the greater their power becomes. Yet enemies can destroy the Odin Stone to do direct damage to the Stonehealer, not to mention Stonehealers tend to be easier to disrupt than other healing counterparts.

A Stonehealer on the move can still maintain support by directly tossing their rocks at allies in one of the most unusual methods for healing ever seen in an MMORPG. When the writing is on the wall and retreat is necessary, a Stonehealer can even pick up their deployable to recover blood and gain a boon effect to help them through the rough spot before they’re able to establish a new healing locale.

For the full class tease, head over to the archetype reveal page on the official site.