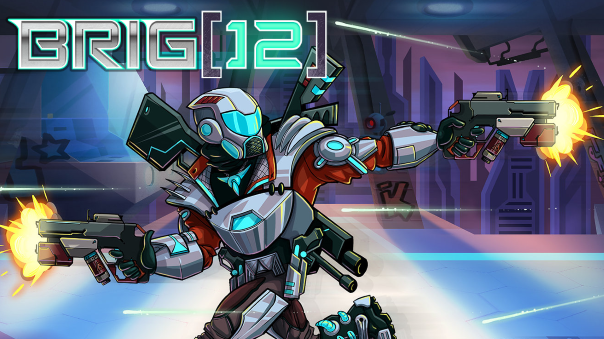 Brig-12 is a pretty fascinating creation, and I like the concept of it immensely. It’s a free-to-play single-play CCG/Turn-Based Strategy hybrid. The concept of playing a bounty hunter clone warrior, traveling the galaxy to put criminals away (and also collect a tidy profit) is something I can certainly get behind. Since it’s not a PVP game, I feel like it should have a little more leeway when it comes to their business practices and in-game shop. It’s very free-to-play, in that you can play the game without spending money, but it becomes a tiring, frustrating slog after just a few hours, when you realize that spending money on the “Hunter of the Week” will net you an incredibly powerful character instead of suffering the low-rarity, weak hunters that you can acquire using the in-game currency. In that way, it has a lot in common with its free-to-play mobile brethren, because it’s “free” but you can certainly make the game more enjoyable and less of a grind-fest by spending money. That might lower the amount of playtime you wind up investing though because it does not appear to have an end-game. Brig-12 would be right at home on the mobile market instead of Steam, with that in mind. The turn-based gameplay is solid, there’s plenty to collect, and you can spend money to go a bit faster. We embedded a video below of me running a battle after spending ten dollars. The fourth character slot is my paid character and most everyone has upgraded gear. 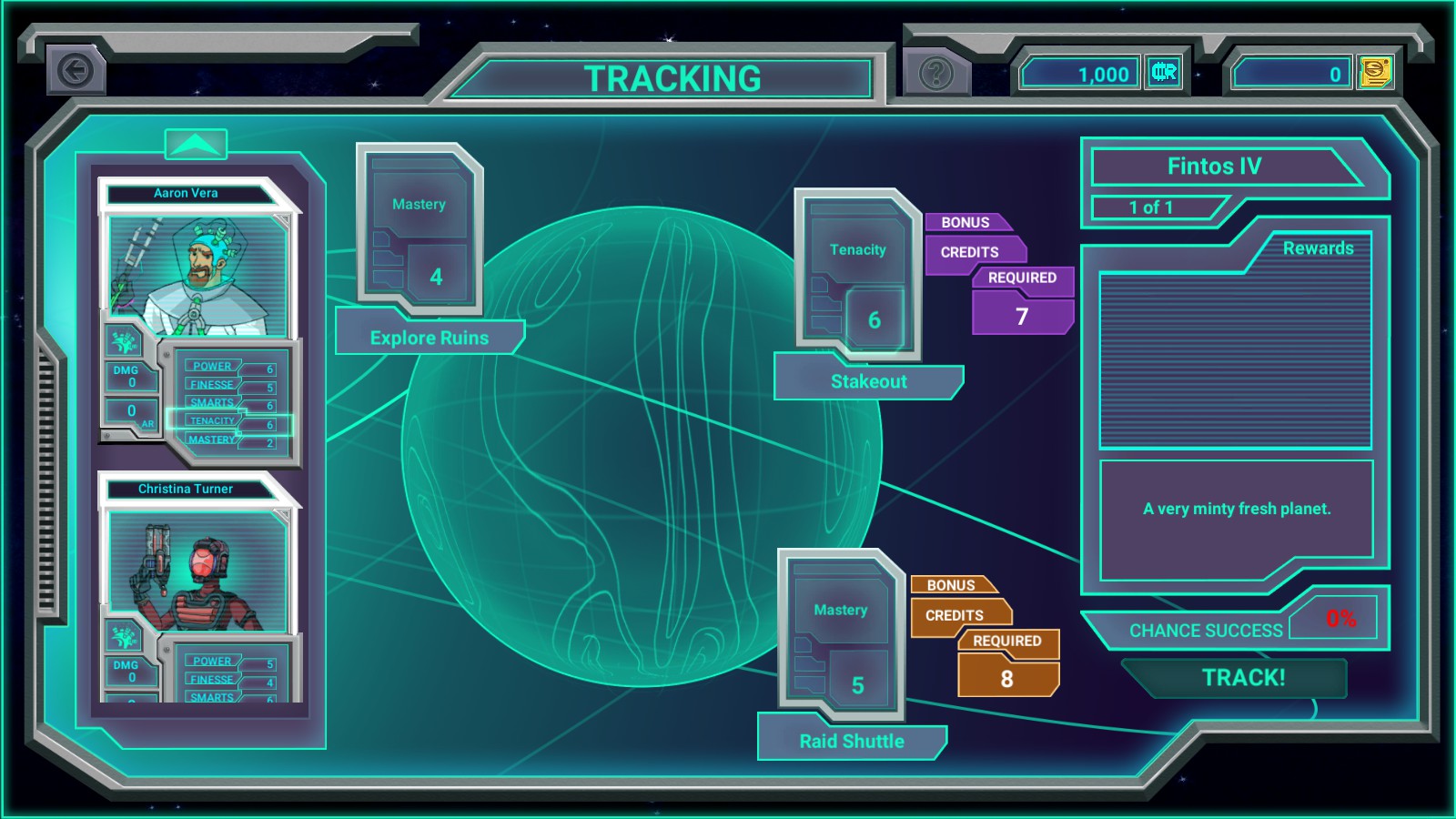 This is a cool design, but punishing failure with combat is a peculiar decision.

Brig-12 begins by creating the character that will be your main Bounty Hunter, and then picking up a few pals to go hunting with you. These first characters will at least come with skills to use, but later ones that you unlock with real-money or through gameplay tend to not have skills, and so you’ll have to do some juggling/purchasing of skills from the lootboxes. Thankfully, those skill boxes let you pick the class you’re after since there are a lot of character classes to pick from. The tutorial is pretty simple and teaches you more or less what you have to do, which is not terribly complicated. First, you select a bounty from the Bounty Hunter HQ. Then you track them down in a fairly easy mini-game. You’ll have a few options to try and gather information, and each of those will have a stat next to them. The harder the bounty, the more difficult that skill/stat check will be. Each of your hunters can only perform one check per bounty, so with the increased difficulty will also come more skill checks, making it imperative you have plenty of characters laying around.

If you have high enough stats to complete these checks, you’ll have a 100% chance to find the right information. Otherwise, you can try at a lower percentage; failure will result in a battle (after which you’ll get the information anyway). Combat itself is pretty easy to get a handle on. The enemy will come in waves of at least three for some solid turn-based combat. You’ll go first, taking your team’s turn in any order you please, each character receiving a turn to deal damage, heal, provide a shield, all of this of course dependent on what skills they are equipped with. The standard attack ability will have no cooldown, but all of the really powerful/useful abilities will (even if it’s just a one-turn CD). All abilities are based on a stat, and thankfully the game tells you how much damage you will do on attacks when you hover over the enemy. After everyone makes a move, then the enemy will get to take their turn, rinse and repeat. I find that AOE abilities really make battles go a lot faster because if you wipe out a wave of combatants, all of your characters get to go again since you always start each turn of combat. Setting up abilities that proc damage for several turns, in conjunction with a solid AoE damage ability can make a lot of these early fights go down quite easily. Completing all of the waves of combat will give you a captured enemy that you can take to the Bounty Hunter HQ for rewards. It’s much better to capture as many as possible (three at first), because the more you turn in, the better the reward multiplier is. Eventually, you can also get lootboxes this way, but in order to turn in more than three at a time, you have to upgrade your ship. So you have to choose between saving money for characters/skills and the ship itself. 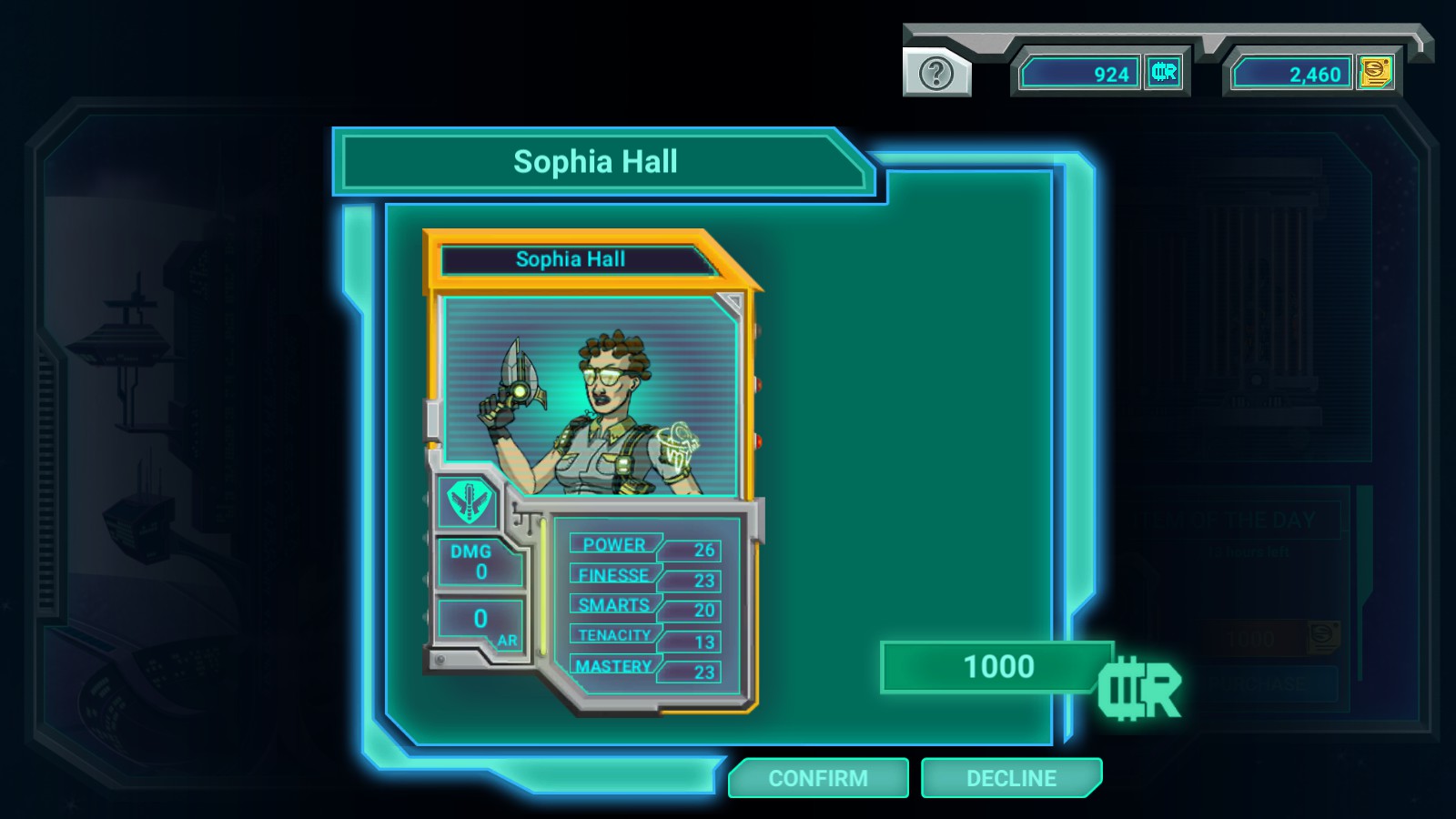 She was an absolute game-changer.

My first few hours were a slog. My characters were all pretty weak, none of my skills or equipment were powerful, but it was time to actually test the game. I spent 10 bucks on in-game currency and started poking around. Overall, the skills and equipment were a little bit better than what I was getting for free, that in and of itself was not game breaking. The “Hunter of the Week” and “Item of the Week” however are on a totally different level. They’re found at the Bounty Hunter HQ, and for 1,000 of the real-money credits (a bit more than two bucks), you can get a legendary hunter with incredible stats. You have to furnish the skills and equipment, but it’s not too hard to get those, either by unequipping a character you’re replacing or by spending in-game currency. But the game went from a slow crawl to laughing maniacally as I bullied all of the bounties down in a handy fashion. That made it much easier to improve my ship and increase the currency/lootboxes I received for turning in piles of bounties. The better your gear and characters are, the more damage/healing/shielding they do, so having those rare/legendary characters sure is a godsend!

As you complete hunts, you can defeat Faction leaders, and after you defeat at least two, you can “Retire”. When you retire, you and your crew all return to their base stats/levels, and your ship is reverted to the stock model. On top of that, you lose all of your credits, because you’re basically a fresh clone again. You get to keep your gear and gain access to some permits which can upgrade the Retirement Island. The upgraded Retirement Island benefits future characters, which will let you tackle greater challenges easier, which is another grind added on to the game. At least this one does not seem to be influenced with real-world money. If you have a whole crew of powerful hunters of the week, I can imagine that this won’t even be a deterrent in the path to being an awesome Bounty Hunter. Altogether, Brig-12 is a really cool concept, marred by a few very critical issues.

Honestly, I like the idea of the game quite a lot. Since it’s not an online competitive game, I’m not angry at it having pay-to-go-faster concepts, but I am disappointed. I understand that free-to-play games have to have a method to make money, but hiding amazing characters behind a paywall and giving you pretty awful ones otherwise is pretty disappointing. There are advanced classes, but the slog to get them is just as tedious. You can also do the Bar Brawl/Pirate Planet content, which are battles outside of the Bounty Hunting, but it’s just not enough. The UI is pretty cluttered and hard to get through, and the “Help” Button did not go away at first. You had to just restart the game in order to get rid of it. The game appears to be broken at this moment, and I have been stuck in a menu for several days. I’m not even able to get back to my ship UI to do anything at all. All I get is a “Duplicate Login” notification, and I cannot do anything other than close the game, re-open it and try again (only to get the same error). The combat is fun at first, but using it as a penalty for failure in skill checks is kind of frustrating, turning a thing that is fun into a punishment. I think there could be a different way to track down leads that don’t use the in-game mechanics as a further grind. Only being able to see what cards do when you go to equip them seems to be a pretty serious oversight, and the early grind is horrific unless you spend a little money. The argument could probably be made that it’s not much money and that you don’t have to, but it sure does make the game more enjoyable. There are a lot of little things I simply love about this game. The premise, the cool air-guitar/two-step your team does when they succeed in battle, the music. But these fun concepts are simply held down by the other glaring issues Brig-12 has.