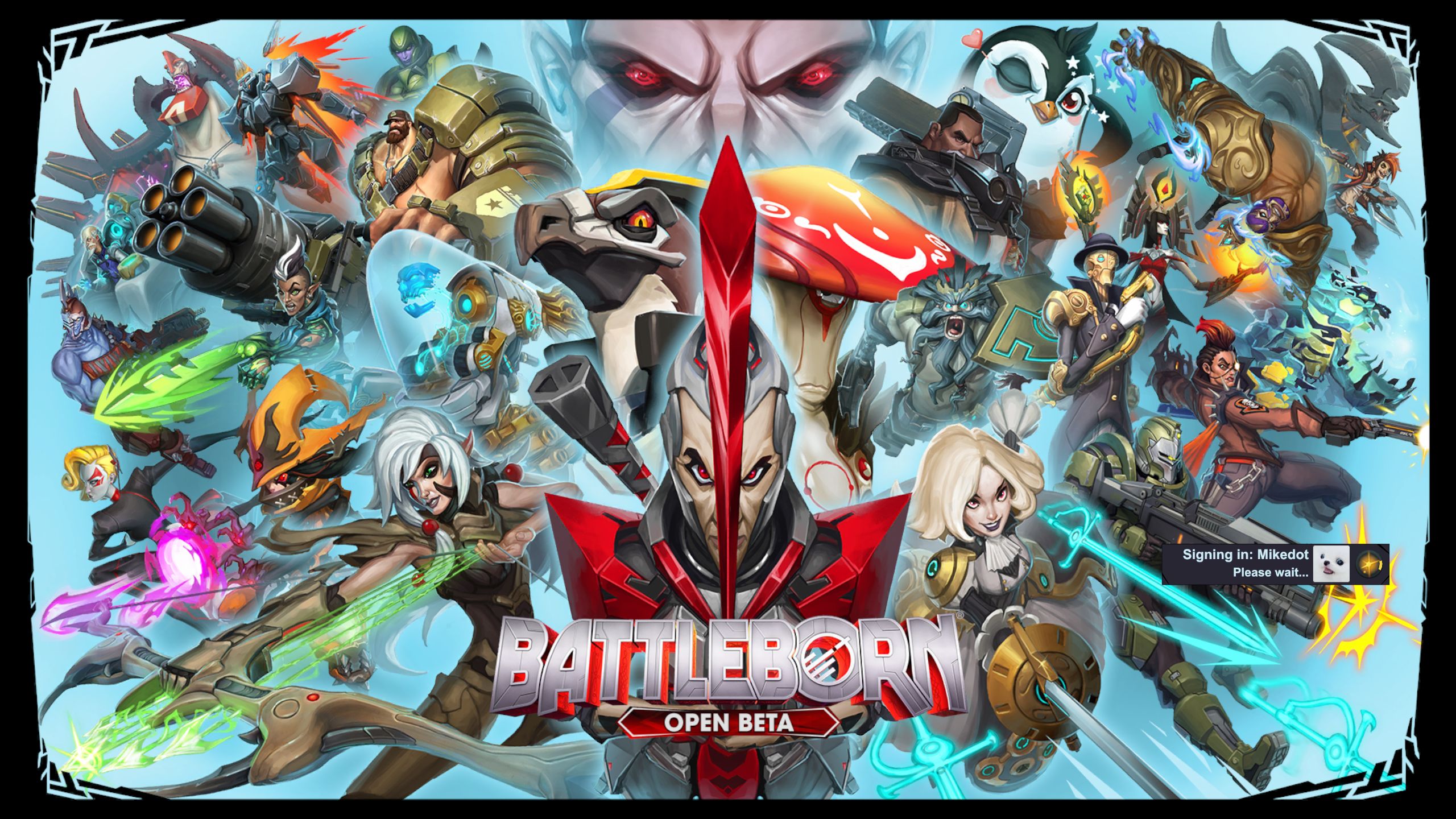 With the full release only a few weeks away, 2K Games is preparing themselves to unleash a brand new Hero Shooter onto the western gaming scene called Battleborn. Developed by Gearbox Software, the same crazy minds behind the Borderlands series, Battleborn features a diverse cast of up to 25 playable heroes, each with their own abilities and playstyles. Along with a fully featured story mode that can be played solo or co-op, Battleborn also features several 5v5 competitive multiplayer matches, a unique skill selection system, and a robust progression system that ties the rest of the game together.

While this game offers up quite a hefty amount of content, 2K Games and Gearbox decided to let masses try out the game for free during an open beta weekend, and with FPS action titles being my main bread & butter, this game was right up my alley.

Since this game has already been covered a bit through past articles, I’ll only be focusing on the PvE experience very briefly before focusing more towards the PvP aspect of the game; with three modes to play through, there’s going to be a lot for me to cover and experience. 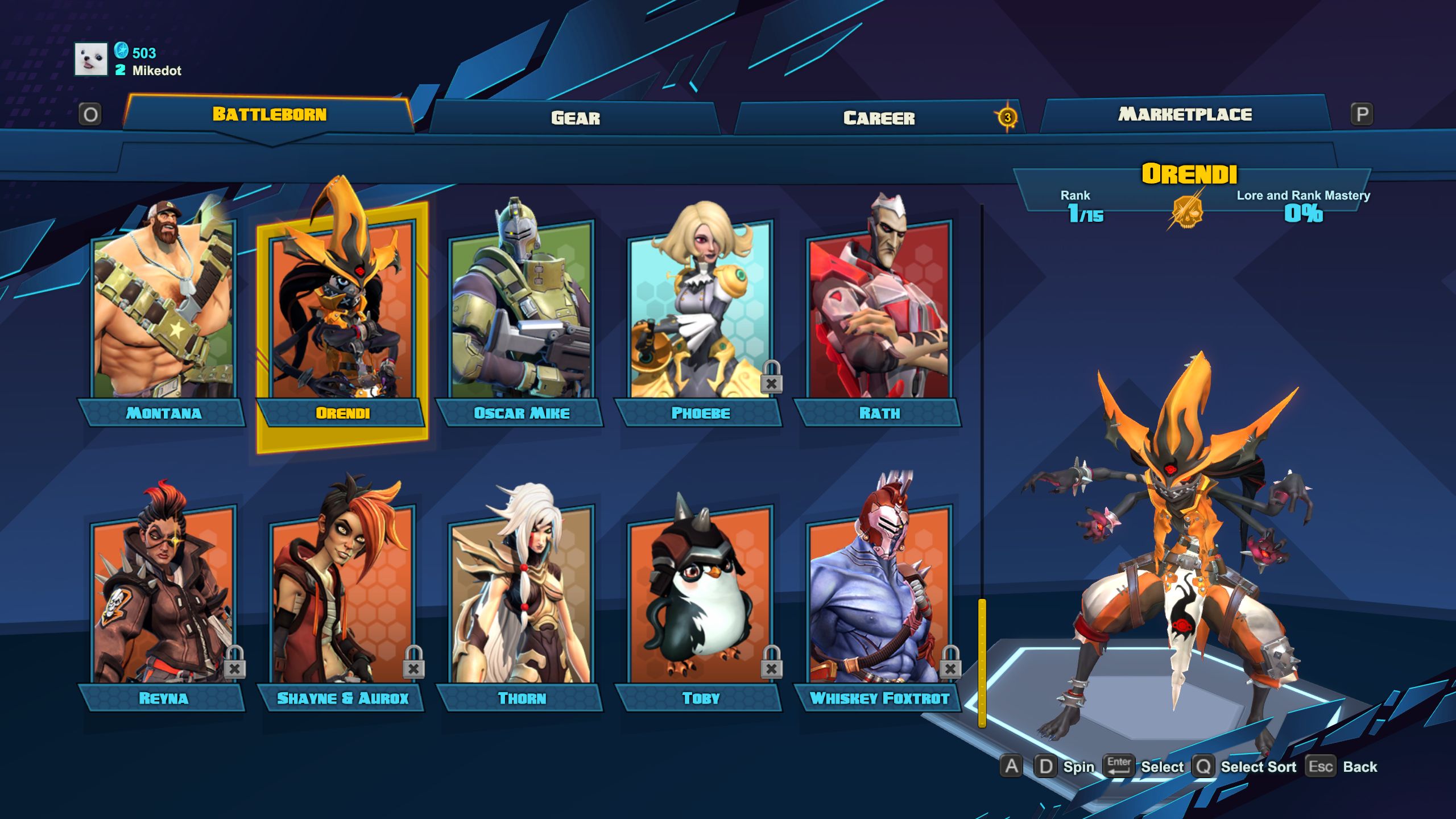 The gang's all here!

To start things off: The game presents itself with a very colorful, cartoon-like visual style that’s very reminiscent of sci-fi titles such as Ratchet & Clank, Jak & Daxter and Wildstar, which I was more than fond of, especially with how diverse and creative the hero roster was. From the progression screen, players can pick and unlock zany heroes including a lucha libre champion, an anthromorphic falcon wielding a rocket launcher, an adorable penguin riding a killer mech, a mushroom ninja and so much more, all bursting with life and personality. With characters like these, it makes me think that perhaps the design team over at Gearbox was taking a few ‘shrooms of their own to come up with some of these characters.

Speaking of the progression screen: here players can check out a multitude of statistics for each character, gear and loadout arrangements, as well as possible unlockable goodies including character specific taunts, color schemes and lore. It seems to be a very straight forward progression system on the surface, but it’s great to see so much stuff that can be unlocked for any character of your choice. 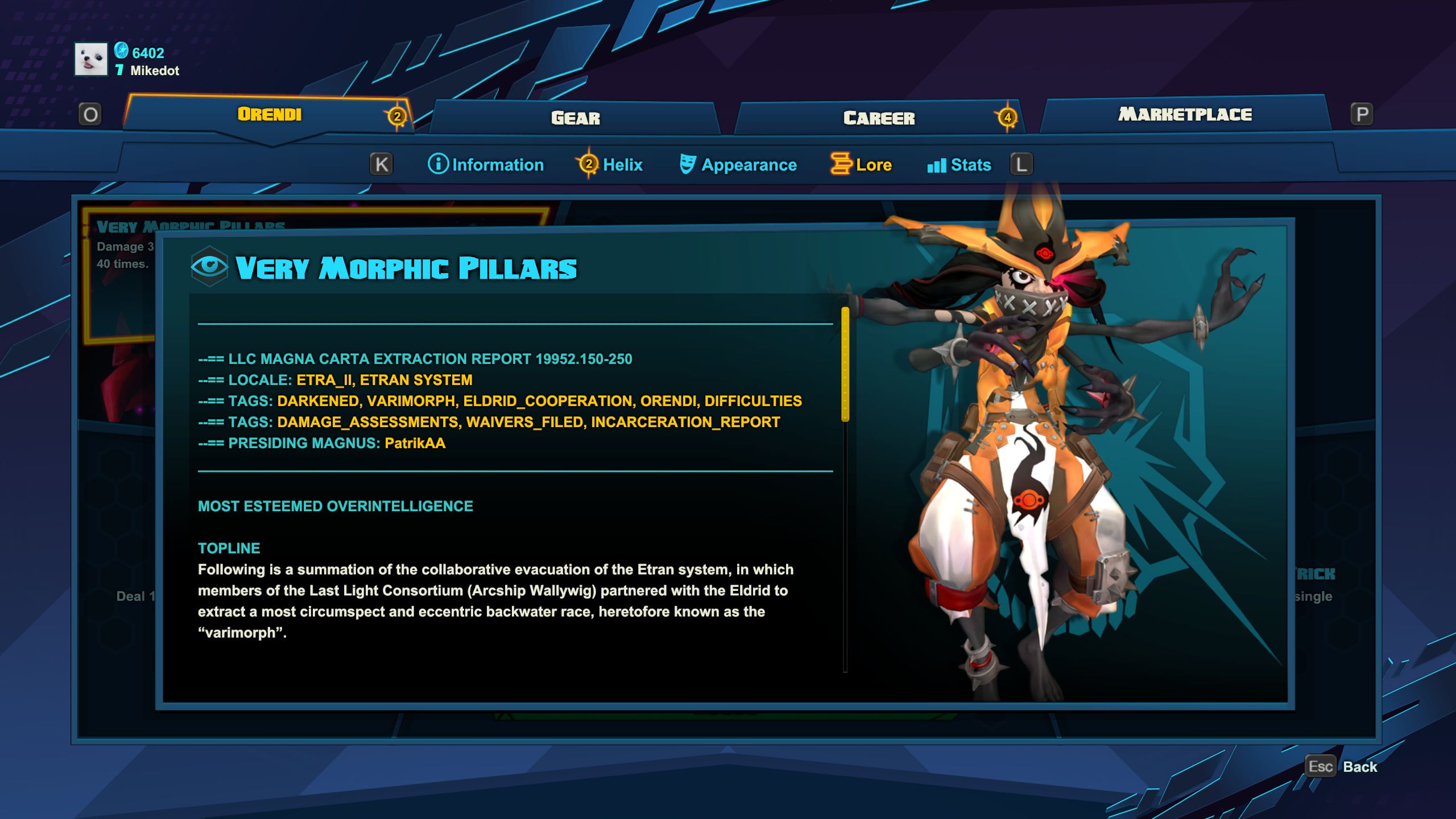 In-game explanations of characters is quite thorough.

Once I finished browsing every possible character, I jumped into a story mode match through the game’s matchmaking service, which only took a few seconds to find another player before jumping in. One of two episodes are available in the open beta, and the episode I got to play through was “The Void’s Edge,” where players must fend off against waves of angry robots, as well as escort a clueless, but lovable sentry bot across the map. From the moment the episode began, the game introduced an impressive display of its colorful visuals, as well as the same kind of tongue & cheek humor that the Borderlands creators are well known for.

During my first enemy encounters, I was able to get a good feel for the combat system quickly as it uses a typical FPS control scheme. Similar to recent hero shooters like Gigantic and Overwatch, however, it also featured skill actions with varying cooldown timers that can be performed using Q, F and E. Also taking a nod from MOBAs, defeating enemies during battles earns EXP which allows players to level up and upgrade their skills through the Helix system, as well as Shards, an in-game currency used to build/upgrade constructs on the map or activating loadout gear. 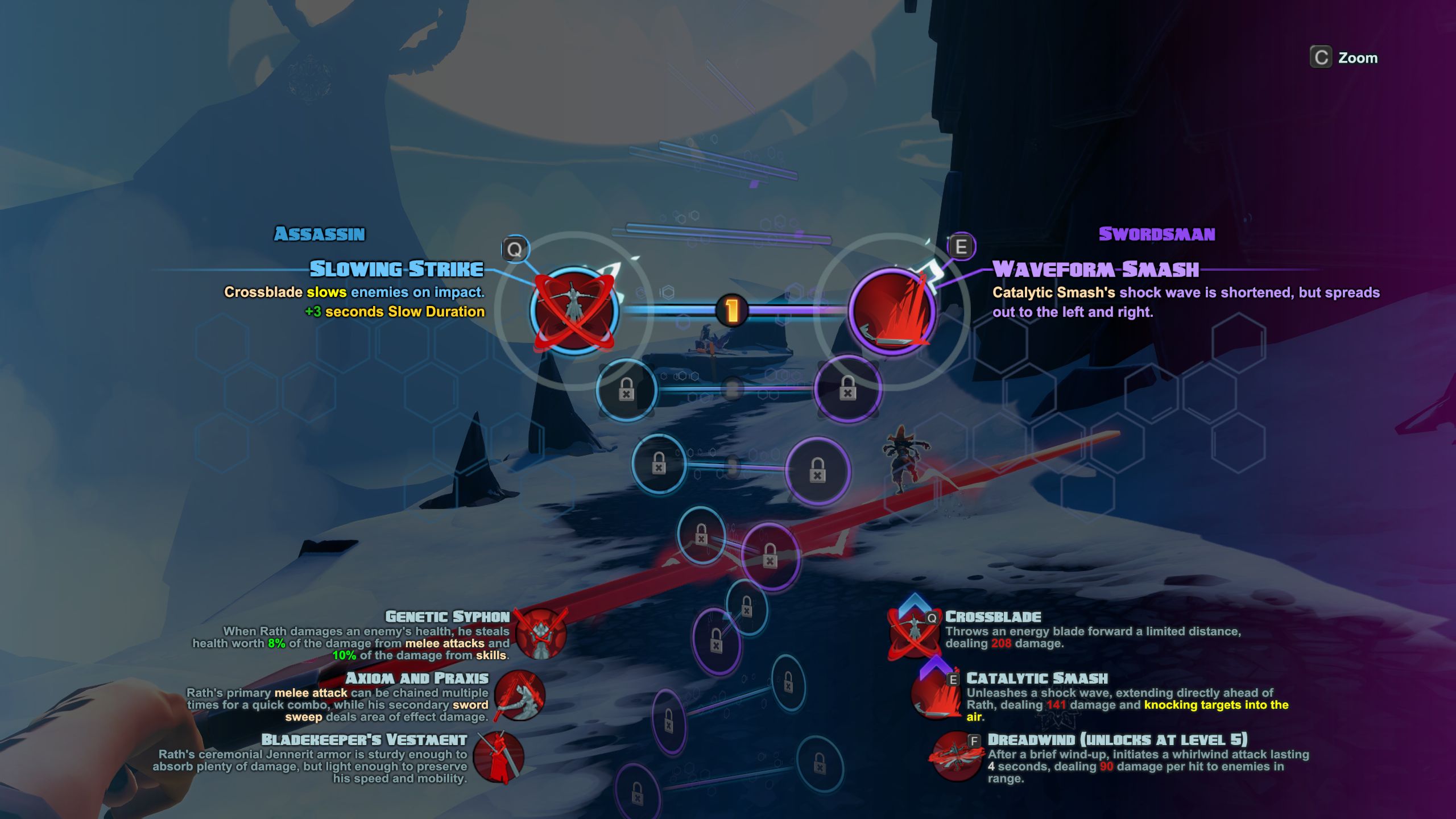 The Helix system reminds me a whole lot of the skill tree system in Gigantic, but in an even more simplified form, as players can select one of two different skill upgrades as they go down a line of varying upgrades all the way to LV10. While the upgrades seem minor, they really make your hero a lot more effective at eliminating enemies down the line. Though limiting players to only two choices per level, the system seems solid, when compared to Gigantic’s method of skill upgrades, as it helps to keep hero classes more balanced, especially in PvP which I will go into more detail on shortly.

As a quick impressions with my story mode playthrough: the challenge of defeating enemies, collecting shards for building constructs to assist in battle, and assisting teammates with objectives was very typical of what I expect from a co-op shooter like this. The fun factor on the other hand was far above my expectations and memorable due to all the humor that was thrown into the story. At times, the humor was a bit cheesy and almost juvenile, but I couldn’t help but smile or chuckle during a lot of the scenes, such as escorting S1 Wolf who has the mentality of a ten year old kid, or listening to Kleese’s smartass remarks. From start to finish, while I felt that the combat and challenges presented in the mission wasn’t anything new or ground breaking, there was some nice laughs to be had, and it made the mission very enjoyable.

Now moving onto the game’s PvP. There are two game modes available including Incursion and Meltdown. The first mode I tried out was Incursion, where two teams of five must defend their base from waves of AI-controlled minions while working together alongside their own minions to destroy their opponent’s base. Simply put, this mode is Battleborn’s take on the typical MOBA structure found in games like League of Legends and SMITE.

As my main character, I went with Orendi, a psychotic four armed witch who uses various ranged and nuking spells, as well as a CC skill that can be used as a form of mobility. Before each match begins, players are given 30 seconds to select their first level of skill upgrades while they’re given a quick explanation on how to play the mode. After all that is said and done, players are let loose into the map as chaos ensues. As mentioned, this game mode draws many similarities from popular MOBA titles, but is able to condense all the elements found in those titles into something that’s easier to understand and enjoy. Things such as jungles are presented as “Thrall Mercenary Camps” where players can not only attack neutral minions for extra shards and EXP, but defeating them will turn those neutral minions into friendly minions that will attack the opposing team ala Heroes of the Storm. Speaking of minions: the minions that players have on their team will only travel down one path instead of multiple paths like in League or DotA2, but will occasionally stray off the path whenever they spot or get attacked by an enemy. These kinds of gameplay differences made the match feel just as varied as any other MOBA match despite the game seemingly offering less possible directions to take. There are enough odd nooks and alcoves though that players familiar with their surroundings could set up surprise ganks.

Still, playing the game like a typical MOBA wasn’t the only option available, as the focus of running and gunning was also just as important of a strategy, especially in my case as Orendai was decent at reaching higher ground that most heroes weren’t capable of reaching. This introduced just how devastating ganks could still be on a single lane map, as I dominated a central choke point with near impunity. Occasionally I would use my shards collected from enemy kills to upgrade a few base defenses, but overall, my character was really good at being a complete pest to the enemy team, allowing my teammates to focus on the objective.

After playing through a few matches, I started to get a much better feel for how well the hero balance currently stood, as well as the helix system in terms of upgrades. While each class fills a particular role of offense, defense or support, it seemed like each hero could hold their own as long as they used both their skills and the map to their advantage. I imagine at the highest level of competitive play, team compositions may dominate over skill, but for the majority of players I feel they can just pick who they want and stay competitive on their personal skill alone. One thing that could sway this balance, however, is the gear system which allows players to equip different gear that will increase or decrease various attributes during a match. While the earlier pieces of gear do not add a significant buff or nerf to stats, I fear that later gear may potentially be quite the opposite. Personally, while I can understand gear equipment being useful in story missions, I feel like the game would be better off without it for PvP, as changeable stats mixed in with skill-based competition doesn’t always blend together well enough.

Just like with story missions, the PvP game keeps a fairly high sense of humor throughout the entire match. The in-game announcer gives out quirky remarks depending on the current state of a match – heroes will occasionally talk trash to opponents and even the sentry that each team protects will occasionally say charming things that will either encourage you to protect it or keep playing when you’re on a losing streak. These are the kinds of moments that really make Battleborn stand out from its contemporaries.

The next available mode was called Meltdown. Here, teams of heroes must guide their minions as they march to their death at the center of the map. Points are scored for every minion who throws themselves into the incinerator, and the team with the most points wins. This mode is also somewhat similar to a LoL/Dota2 match as minions will have two lanes to travel down instead of one. Players must constantly switch back and forth to support fallen allies or ensure the final moments of a minion wave push. After a quick few playthroughs, I felt that this mode in particular was less exciting compared to Incursion. While the game mode mechanics were paced well, I really missed not having any sentries to protect or thrall mercenaries to hire.

And the last available PvP mode available during Battleborn’s open beta was the option to play ranked matches. In this mode, players will be ranked based on their performance as well as win/loss ratio in order to earn their spots on the leaderboards, as well as some potential rewards. Players can also vote on which game mode to play on between Incursion, Meltdown and the unreleased Capture mode. Other than that, there’s not much else to say about ranked matches, other than the potentially “serious” players you’ll have to work with and against. So you better bring your A-game to the match, or face the nerd rage of your teammates for not playing up to their “standards.”

Overall, my time spent playing Battleborn was a real hoot, and it’s mostly thanks to the game’s colorful visuals, easy to pick up gameplay and humor. While I’m more excited to play through more of the story, the competitive game modes available will clearly be where the lasting appeal comes from. Still, it’s very exciting how this game seems to handle both sides of the coin fairly well with only a few personal gripes here and there. As it stands, I’m looking forward to seeing the finished product to see if the humor can last all the way up to the final chapter. Not to mention if the competitive modes can carry the game’s replayability past the month or two mark for most players.