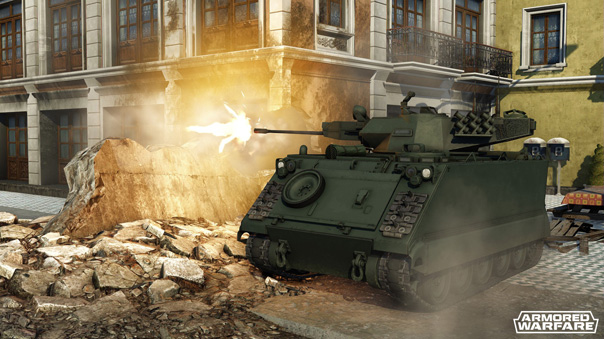 Obsidian Entertainment today released a document discussing their tactics for properly balancing vehicles in their upcoming modern armor team shooter, Armored Warfare. Finding the right line to walk between historical accuracy and competitive fun gameplay is never an easy task. But now we at least have a behind the scenes look at the thought process incorporated into this on-going process.

Before release, the developers look at a historical tank they wish to put in game and decide based on its real life performance, what tier the tank belongs to. Setting its tier and tank style is the first and foremost goal, done by establishing stats on key areas of the tank such as armor, speed, traverseability, etc. To be historically accurate, these numbers are typically sourced to books, encyclopedia, and military magazines written in the original language of the tank designers. Of course for the sake of gameplay, penetration values are lowered to ensure armor still plays a key role in the close and personal corridors of Armored Warfare. In order to make for more compelling gameplay, the more viable (and in real life more expensive) tank classes are toned down to put them on equal footing with the lesser tank classes as well.

Post-release Obsidian carefully monitors battle statistics to look for outliers proving too powerful or weak. While a pipeline is in place for efficiently analyzing mass amounts of data to immediately find balance offenders, sometimes more meticulous measures are required. For instance, a tank may be mediocre in the average players hands, but feature a hard to discover exploit that the highest tier of tankers discover and utilize. Keeping an eye on what the pros are up to and putting a damper on it before the knowledge filters down to the masses is a great way to avoid a lot of community QQ in the long run.

Perhaps the toughest challenge is rebalancing Premium Tanks that the community sunk their hard earned cash into. These tanks receive the most pre-launch testing to reduce the need to nerf them as much as possible once in the hands of the community. They’re typically placed in a safe zone below the estimated power of a fully upgraded regular tank to ensure that most nerfs will hit elsewhere rather than on these cash shop armors.

For the full details of Obsidian’s balance strategy, Armored Warfare