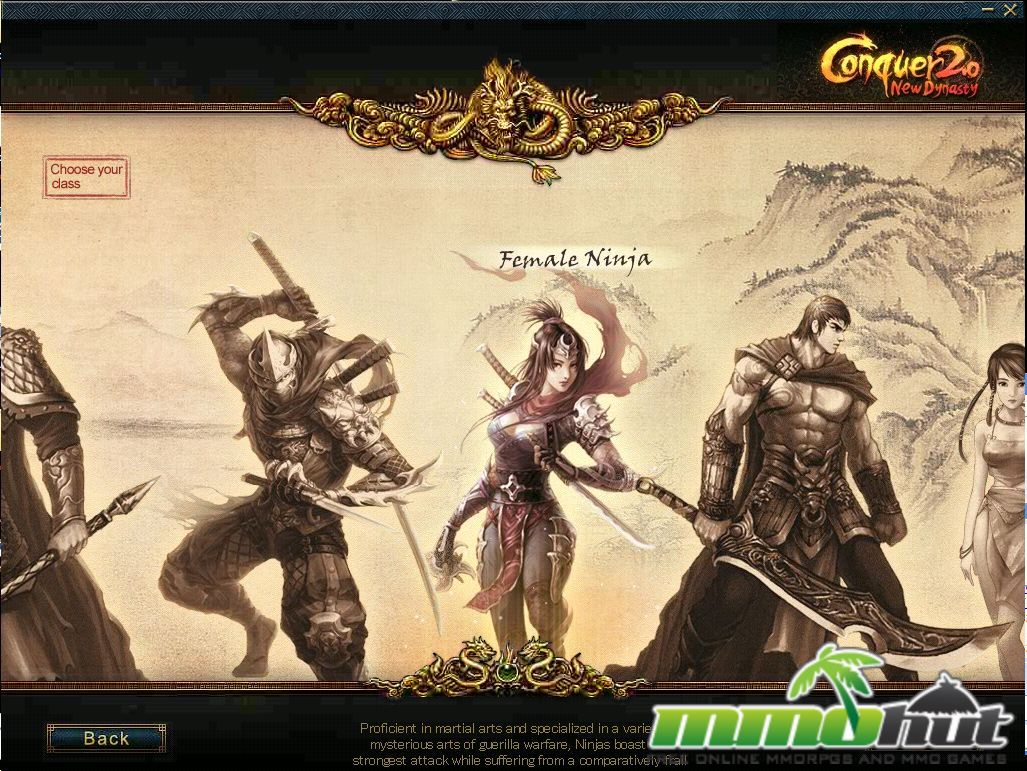 Conquer Online is a 2D Fantasy MMORPG by TQ Digital. If you’ve read any of my reviews for Zero Online, Eudemons Online or Crazy Tao you might remember how I commented that all of TQ Digital’s games are unusually similar, and unfortunately, that’s true for Conquer Online as well. The game just feels too much like TQ digital’s other games, but if you haven’t played any of their games before, then Conquer Online is certainly worth playing, as the game has a huge playerbase and a boat load of features.

Upon installing Conquer Online and logging into the game, I was quickly disappointed by the game’s character customization. Like Zero Online and Eudemons, Conquer Online has virtually no character customization. Players can only select their gender and class, and that’s it. Well, players can also choose either ‘big’ or ‘small’ as their character’s ‘size’, but after trying both, I’m confident that ‘size’ does absolutely nothing. Customization aside, I was impressed with the number of playable classes in the game; most MMORPGs rarely have more than four playable classes and games by TQ Digital usually only have two or three, but Conquer Online has five (they’re listed on the overview page!).

After making my character and upon entering the world of Conquer Online I was immediately surprised. The game’s graphics were blocky and unappealing. The game’s login and character creation screens were a bit deceptive, as they looked really polished and I was bracing myself for a good looking game. I just wish that the developers spent equally as much time developing the game’s overall interface as they did polishing out the character creation and login screens. Conquer Online’s interface, as it stands, is terrible, as It feels like it’s straight from a windows 98 game. I don’t mean to bash on any good games for windows 98, but the fact is that MMORPGs need to get with the times if they expect to compete, especially older games, as they can’t compete in terms of graphics with MMORPG heavy weights like Runes of Magic and Atlantica Online. My last remotely interface related complaint with Conquer Online has to do with the game’s monster sprites. The game seems to recycle them quite a bit, as more difficult monsters on a map tend to look almost identical to their lower level counterparts, just with a different name. This problem isn’t unique to Conquer Online, as other MMOs do it as well, but I seemed to have noticed it a lot more in Conquer. Graphically speaking the game isn’t anything too impressive, but the lower tier visuals means the game is compatible with many more PCs, as not everyone has access to the top of the line computers. 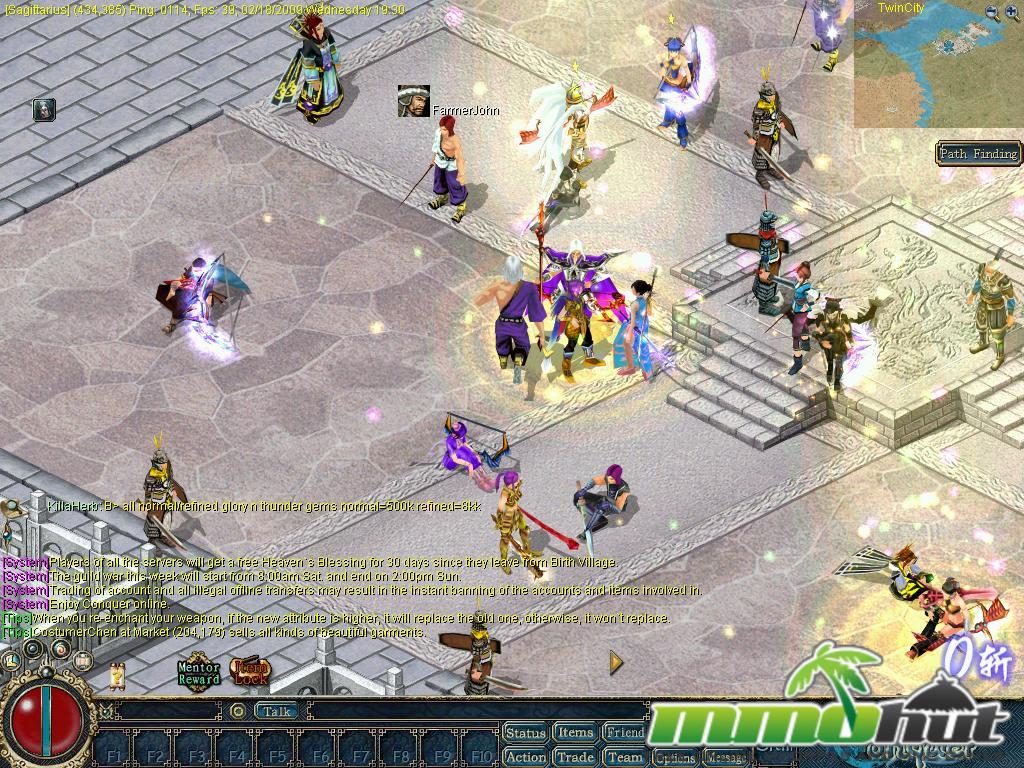 I couldn’t think of any witty sub headers to use for this paragraph, so I apologize in advance. Perhaps the most impressive aspect of Conquer Online is its core gameplay. The game’s combat is fast paced and surprisingly fluid, skills and spells have great animations and the game has a lot of playability. Upon reaching level 120 players can be ‘reborn’ and start the game all over again at level 1, but with access to better attributes and special skills this time around. Even if you never get to play a ‘reborn character’, it’s always reassuring to know that a game has enough things to do and experience to gain to keep players from quitting. Players can rebirth themselves up to 3 times, and each time players rebirth and max out they become more powerful. The game’s experience rate is fast enough to keep players from getting bored to death but not nearly as fast as TQ Digital’s other titles. Like in all of TQ Digital’s games, ‘XP Skills’ are an important aspect of the game. Every five minutes or so players can use special skills called ‘XP skills’ which can deal devastating amounts of damage. Unlike TQ Digital’s other titles, ‘XP Skills’ in Conquer Online are actually balanced and don’t break the game. This feature spices up the game’s combat and makes the grinding feel less of a chore. Another neat little feature that Conquer Online has is a player housing system where players can store some of their extra items and even invite other players to come visit them. Aside from actual PvE content, Conquer Online offers a lot of “little things” that keep players coming back for more.

I’ve always been a fan of games that were PvP friendly, and I’m pleased to say that Conquer Online has quite a bit of fun PvP options. Firstly, there is an open PvP environment, meaning anyone can be killed at anytime by another player. There are repercussions of course to prevent players from mindlessly PKing everyone they see. Upon accumulating 30 PK points, players will have a 30% chance of ‘losing’ 1 piece of equipment upon death. The more PK points a player accumulates the more severe this penalty becomes. The second PvP mode in Conquer Online is the ‘Guild War’ which allows guilds to compete with other guilds for control over certain areas in the game. The winning guild is usually rewarded with a large number of CP points, which can normally only be obtained through the game’s cash shop. Lastly, Conquer Online also has a series of PvP tournaments that are weekly and monthly. Weekly tournaments are every Saturday while monthly ones are on the first of each month. The game also has a special PvP tournament every Sunday where the 20 most powerful male players and the 20 most powerful female characters on the server compete. There simply isn’t enough room in this review to discuss all of the PvP modes in detail, but needless to say, Conquer Online has a lot of interesting PvP options that are well worth checking out.

If you can look past Conquer Online’s graphics the game is certainly enjoyable. The game’s combat is fast paced and fluid and it offers a myriad of fun PvP options. It also has a massive playerbase and simple gameplay. The only real complaints I had with the game are its poor visuals, lack of character customization and the recycling of monster animations. If you’re looking for a new game to try, Conquer Online is worth checking out.