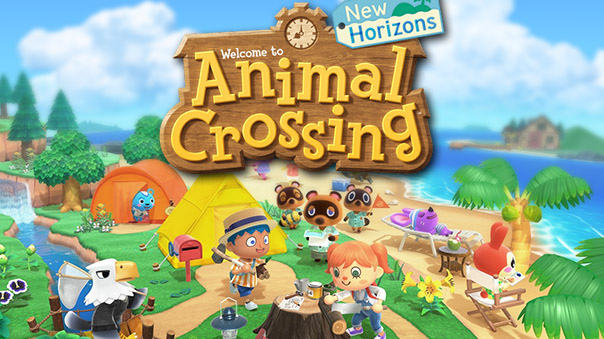 The classic debt-repaying simulator has at last made it’s highly anticipated debut on the Nintendo Switch, and it could not have come at a better time. With all the doom and gloom surrounding COVID-19, we could all use an escape to a little island getaway where everyone knows your name.

Looking back I was astonished to find the original title came out almost 19 years ago. I still remember being equal measures frustrated and impressed by the bold decisions the developers made at the time. The concept of forcing game-time to match real-time is kinda bonkers and geniusly shored up that game’s weaknesses as a result. Nowadays however, that trick is less cute and Animal Crossing: New Horizons suffers immensely as a result of the continued tradition and a distinct lack of meaningful innovation on a decades old formula.

So Pretty It Hurts

I’ve played quite a few Switch titles from the Marios to the Zeldas and just about everything in between, and I quite say with confidence this is the best looking game I’ve ever played on this system (albeit,  Link’s Awakening is a close second and would be first if not for those pesky frame rate issues). Every moment, no matter what you’re doing, is a treat for the eyes. If nothing else, visiting this world and soaking in the aesthetic is an enjoyable experience by itself.

Walk around and watch the wind rustle the leaves on trees, carefully observe the little insects going about their business, chat with someone to get that zoomed in look where you can see the fuzzies of their fur. Combining these high quality details with the just-right camera angle and a tiny bit of blur gives the game a tilt-shift like look to it that makes it feel almost real. Although, I’m not a huge fan of your personal avatar because I think they look kind of Mii-ish, but that becomes a minor complaint as they are just so adorable once you start to customize them. All together, I love the look of this game and fawning over how amazing everything looks to everyone I know never gets old.

Diving into the gameplay is where things start to get a bit wobbly. One of the biggest and most impactful changes over the previous titles is in the ability to place anything anywhere. Want to create a cozy cabana on the beach or show off fossil finds in front of your house? Go for it. Or maybe you want to terraform your island and create something almost entirely new? You can do that. Similarly, you can create and share the designs you’ve painstakingly inked in pixel-by-pixel and slap it on just about any surface you can think of. Just those two things alone cultivate endless amounts of creativity in how you and your island looks. Admittedly it’s not really something I care that deeply about, but I definitely love seeing what the more creative and inspired members of the community can come up with.

Going further, you very quickly get access to the camera. Even better than the built-in screenshot function, you can precisely dial in on a particular scene and experiment with a variety of settings as you please. As a side note I think one of my favorite trends of this generation has been the easily accessible in-game camera function. It’s the kind of thing that I enjoyed much more than I thought I would. Usually, in-game cameras feel extremely niche, but with Animal Crossing in particular it has become fundamental to my core experience.

The Beginning of the End

Then we get to tool durability. In this entry, your gathering items break and must be recrafted constantly. I am not a fan of this. So many developers over the years have tried to mimic the Minecraft formula and add a bunch of superfluous survival mechanics only to misunderstand why they were there in the first place or how it will impact their own game as a whole. I’m just glad we didn’t also get a hunger meter to deal with.

I mean, at least it makes some sense here on a deserted island where you start from scratch, but it almost immediately becomes a nuisance that doesn’t add to the gameplay at all. Having your items break when you’re never more than a few seconds away from a crafting station or a shop is utterly pointless and needlessly impedes whatever you were doing in that moment. Worse still, upgrading most of your tools doesn’t make them more efficient, interactive, fun, or interesting to use, they just last longer than before. How boring.

There’s also an element of building your own furniture after first acquiring the respective recipe. I think this is where the material gathering and a more subtle level of progression come together quite well. It’s simple and effective in serving its purpose of allowing repeated and regular access to particular items. There’s a problem with making multiple things in a row since you can’t craft in bulk, but that’s a fairly inconsequential issue I don’t doubt will be patched in eventually.

He Got Us Again

Playing second fiddle to tool durability is the Nook Miles, or otherwise known as the lazy attempt to make everything you do matter. That’s pretty harsh so let me back it up a bit. I think the way Nook Miles is initially implemented is fantastic! Getting instantly rewarded for completing tasks and checking out new things for the first time is a brilliant way to introduce players to your systems and mechanics. However, the concept plays itself out after only a couple of days and maybe a dozen or so hours of gameplay. Earning those rewards becomes few and far between, and even if you did have more to earn you wouldn’t have much to spend it on anyway. The biggest ticket item you can buy is just that, a ticket to another island that may contain a new town member, some renewable items that you otherwise wouldn’t have access to (like different fruits) or more of a renewable resource like rocks or trees to gather from. In your first few days every trip is exciting and fun, but once you reach your recruitment limit and have all the fruits there’s almost no reason whatsoever to keep going out.

Worse still, I would argue the inclusion of this system morphed into a crutch, or excuse, to not develop or build on other aspects of the game. Why bother creating a more interesting tool durability system when you get some Nook Miles every so often when they inevitably break? Should players be inspired to create or design something meaningful or are Nook Miles a good enough reward? You know people start to lose interest in playing once they do their dailies, maybe something could be developed to keep them engaged for longer than thirty minutes? Nope, Nook Miles. Granted, there’s a ton of objectives to hit, and some of them are more interesting, many of them however turn out to be simple grind-a-thons that lack genuine engagement and instead force you to wait or waste time.

It almost feels like a proactive attempt by the developers to shield themselves from criticism. Something to point to when someone brings up the flawed and dated design they’ve gone all-in on. My very simple solution would be to phase out Nook Miles for something else once you hit a certain level of diminishing returns. It could top out at, say, break 20 axes, then from there it could be something entirely different like giving everyone in town an axe. Maybe instead of catch 100 fish, you could be tasked with creating your own aquarium and have your fellow islanders pay a visit. The point, then, would be to try out different activities and think outside the box in a way that’s both integrated and rewarding – anything to stave away the stagnation of doing literally the same exact things every single time. Nook Miles serves as a fantastic device for guiding and easing players into the game, but the implementation past that is hollow and dull.

Hurry Up and Wait

I cannot accurately express just how many times over the course of my play I asked myself the question, “Ok, now what?” Just about everything I came across seemed astonishingly limited from the bare bones mechanics, tiny island to explore, limited villager interaction, lack of meaningful tasks, to even the decorating and designing itself. I feel like I hit the walls of what I can do, see, and look forward to almost immediately upon stumbling upon each new feature presented to me.

Multiple days over I would spend not even half an hour in game just to exhaust what was available and turn the system off until the next day where hopefully something would happen. Then, like clockwork, I would go in and set the next day-long event in motion before moving on to something else. Just how patient do I need to be before I really get to start to dig my teeth into what this game ultimately has to offer? I would dutifully accomplish objectives and run through everything I could do, desperate for more, but came up short time and time again.

What I expect and what I continue to want is more. I want more of a village to explore and interact with in more meaningful ways, I want more townsfolk and more genuine interactions with them, I want more random islands to go to with more interesting things to do on them, I want more to do and strive for than just an expansion on a house that lost its purpose once you could place anything anywhere and, most importantly, I wanted more drive to create and tinker with this game in ways that I could not get anywhere else.

My lasting impression of Animal Crossing: New Horizons is that of disappointment and frustration. That being said, don’t doubt for a second that I love the bedrock and foundation of what’s currently being presented. Again, I absolutely adore the look they went for and appreciate the stunning attention to detail in literally everything. It’s the rigid reliance on tradition and painfully apparent lack of ambition or creativity in game design that annoys me to no end.

I totally get this is the kind of series that is better played over days at a time – and this entry in the franchise in particular is a slow starter – but that’s still no excuse for the half steps when it comes to anything gameplay related. I came to realize what I had in front of me was a puddle as deep as the ocean. I was hoping for a game and got a toy instead.