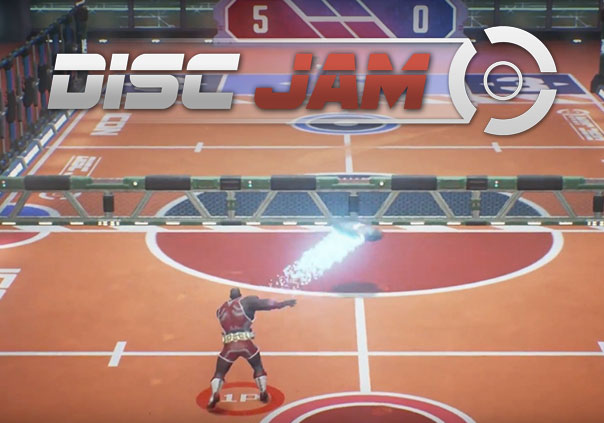 Disc Jam is a 3D action sports game developed by High Horse Entertainment for PS4 and PC and it will be available on Steam upon release. If you’re looking for an action-packed, fast-paced sports game that pits 2-4 players against one another, then you won’t find anything more hectic than Disc Jam, a game sporting a unique combination of air hockey and tennis.

In Disc Jam players will be left scrambling as they try to catch and throw a glowing disk with the objective of getting it into a variable-point end zone on their opponent’s end of the court. Players will also have to defend their own end zones from opposing throws and abilities, making the game even more mind-boggling as players will find themselves constantly switching between offensive and defensive maneuvers. Ability timing will be key in catching your opponent off guard to secure yourself as many points as possible. Even dives will need to be perfectly timed so you can make those hard saves and send the disc flying back to your opponent at lightning speeds. The player with the most points at the end of the match wins and can declare themselves the better disc thrower.

With a crazy roster of characters to play as, responsive controls to give you a fluid experience, and such action-packed gameplay, Disc Jam will have you on the end of your couch no matter if your opponent is sitting right beside you or across the Internet. You’ll even be able to play alongside your friends and take on other players online as a disc-throwing team. Experience a sport like you have never experienced before and throw your disc as hard as you can so they all know who has the best reaction time!