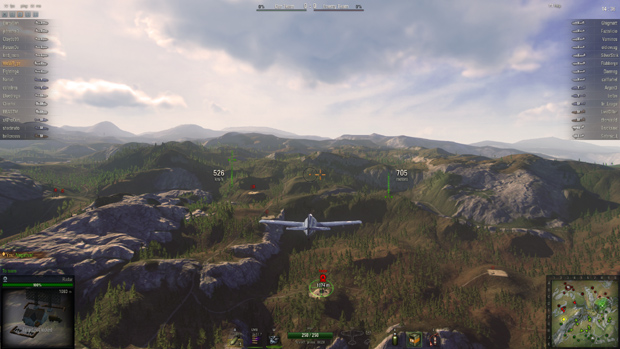 World of Warplanes is the recently released free-to-play warplane-based game brought to us by the creators of World of Tanks, Wargaming. The game takes place during the “Golden Age” of aviation, so all but the highest tier of planes are powered by propeller. While not a hardcore flight simulator, it does have several of the features that made World of Tanks such a great game, including large battles and tech trees. While still having a lot of strategy involved, the game is a lot more action-based than World of Tanks, as you won’t be sitting still or hiding behind bushes. The arcade-like controls make it extremely easy to get into the game, and it can be played with a mouse and keyboard so there is no need for an expensive joystick to enjoy the experience (though it’s certainly supported!). It seems Wargaming may have another successful game on their hands.

There’s decent amount of customization in World of Warplanes. Using the tech trees you can gain access to new planes and components. You can choose which type of frame, what engine, and what weapons your plane uses. On top of that, you can choose what ammunition or other equipment and consumables you take with you into battle. You can give your planes a personal flair by giving them paint jobs. You can also train up your pilot and select the skills it learns as it levels. Just about all you could ask for in terms of customization, really.

This game looks beautiful. That’s the best way I can describe the graphics. They’re not mind-blowing, for sure, but you can tell a lot of thought went into their creation. The models are detailed, and have high quality textures. The maps look superb and I particularly enjoyed the maps based around water and islands, because it made for some stunning scenery. Seeing it all blur by while bullets are raining in every direction and explosions happen all around you is an experience that is hard to put into words. Damage to planes, and crashes, I felt could use a bit more work as they seemed a bit lackluster, but what was present was at least OK. 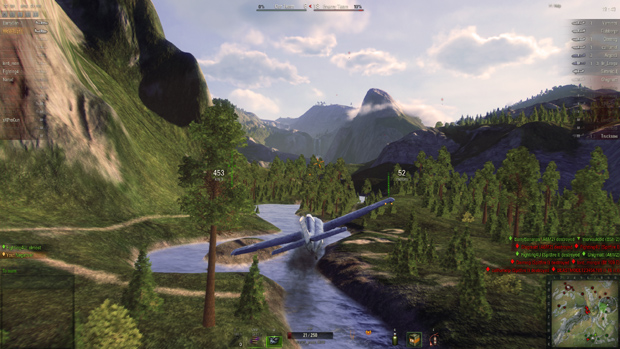 As I mentioned in the introduction, this game isn’t a simulator in the least. The controls are a lot simpler and you won’t be tasked with keeping track of half of the things you would in an actual flying simulator. Just a mouse and keyboard is all you need to be an ace. With the mouse, you will control where your plane is going and fire your weapons. The keyboard is used for engine boosting, looking behind your plane, air breaking, activating consumables, and stuff such as that. Of course, you are given a great amount of freedom to customize your controls so that they can be tailored to you. I didn’t notice a problem and was pleasantly surprised to find how smooth the game played with just a mouse, as I’m used to having to break out my trusty ole’ joystick and spending hours fine-tuning my sensitivities and keybinds to be able to play flying games.

The community in World of Warplanes is decent. A lot of the players I ran into seemed quite mature and even helpful when I had questions. Of course, there were a few trolls, but they seemed to be rare compared to normal players. The forum community seems active, as well. This is definitely one of the better MMO communities I’ve participated in and it is thanks in no small part to the large community World of Tanks has amassed, as it seems like a lot of WoT players have moved over to this game or are playing both games.

If you’ve ever played World of Tanks, you’ll be familiar with the set-up of World of Warplanes. While playing, you’ll either be setting up your planes in the garage or in a battle, fighting. Unlike World of Tanks, there are NPC targets you can take out for extra points and not just enemy players. Another difference is that you can’t stop moving and you’ll more than likely be in non-stop dog fights until you either win the match or are shot down (or, if you’re like me, accidentally crash into something). In the end, what these differences mean is that you will be relying a lot more on your reflexes and instincts rather than your patience and tactics. 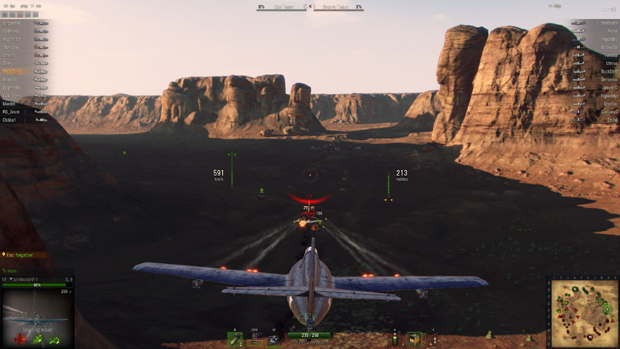 So far, there is only one game mode to participate in. You can either “solo q” or join up with some buddies in what is called a Flight to play together. Once in the match, the primary objective is to eliminate all enemies, with secondary objectives being the many AI ships, buildings, and anti-air guns. This basically means that a majority of people will pick fighters so they can get into the epic dog-fighting action, while only a few will choose to focus on the AI targets using bombs. In all honestly, in a majority of games I played, the secondary objectives were ignored and everyone focused on killing one another (which isn’t an issue, in my opinion). 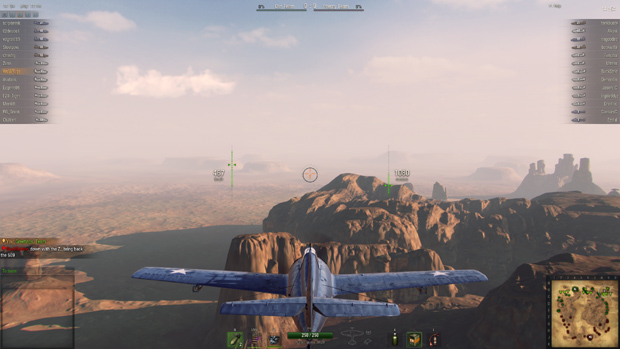 Combat is a lot more arcade-like compared to what I thought it would be. One game that World of Warplanes will undoubtedly be compared to is War Thunder. The two offer similar experience, with two fundamentally different approaches. War Thunder focuses on providing both an arcade-like experience but also offers a simulation-like experience that rivals some of the more popular flight simulators in complexity. War of Warplanes on the other hand doesn’t have that at all. You won’t be worrying about yaw, pitch, or anything else. Combat basically revolves around employing air breaks, flaps, and engine boost to control speed while trying to get your guns pointed at the enemy. I truly enjoyed the depth with which War Thunder was developed, but I can very much appreciate how fun and easy World of Warplanes is in comparison. 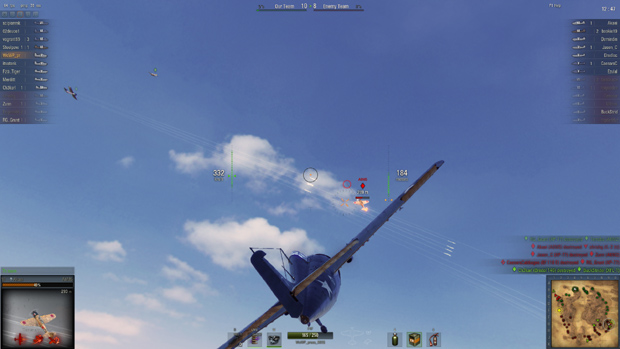 If you’re not great at flying a plane, but have always enjoyed the idea of sitting behind a propeller-driven machine of death, fighting it out with fellow aviators in intense dog fights, this is probably the game for you. All you will need to enjoy this game is a mouse, a keyboard, and a bit of spare time. It’s extremely easy to get into and is user-friendly. It even goes so far as to show you where you need to lead your shots in order to hit your current target, making it extremely easy to shave away your opponents health. The more hardcore war plane fanatics may not appreciate this, but the more casual gamers will love it. Thanks to the ease of which you can get into the game, I was able to thoroughly enjoy my time without having to feel like a noob for more than one or two games. 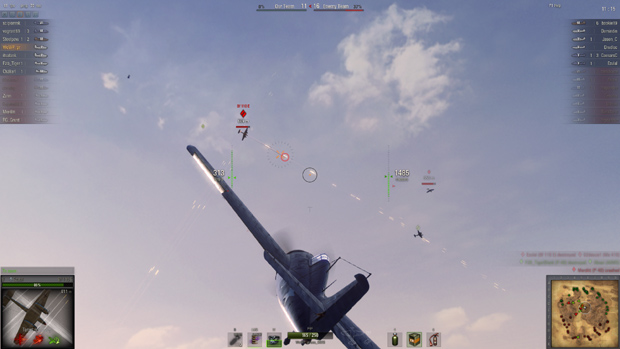 Bombing was an interesting experience. For the most part, as long as I carefully planned out my flight path to keep myself away from the massive ball of dog fights that usually break out towards the middle of the map, I was able to make it to the enemy AI targets without much harassment. From there, there is a very user-friendly bombing method that allows you to easily see where your bombs will land when you launch them, which means you can basically hit your target every time without much practice. Of course, the bombs are heavy and will slow down your plane a lot, so it’s up to you whether or not you want to chance being caught by a faster fighter while not being able to do much but hope you can outsmart him. The bonus is, however, that the AI targets seem to be worth a decent amount of experience and money, which can be used to unlock more advanced planes in the tech tree. In essence, I suppose bombing is similar to the “light tank speed scouting” method of advancement in World of Tanks.

In the end, I have to admit that I thoroughly enjoyed my time in World of Warplanes. It offered a very easy-to-get-into casual experience compared to what I’m used to from other flight games. Thanks to the massive community and acclaim Wargaming has gained from World of Tanks, there is no shortage of players in World of Warplanes, so I never had an issue getting into a game. While playing with a couple of friends, we all had a blast and have made plans to continue playing. I would definitely suggest you download this game if you’re looking for a game with planes in it, but don’t want to spend months trying to get good at the game. 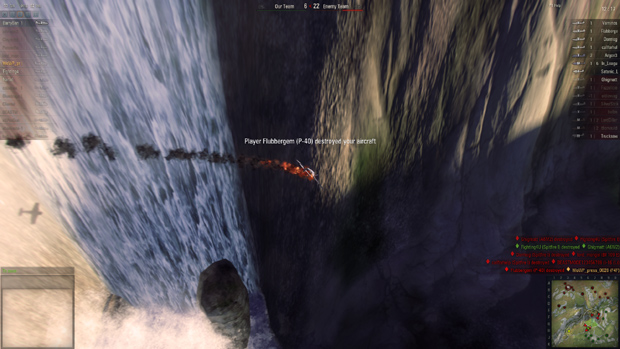