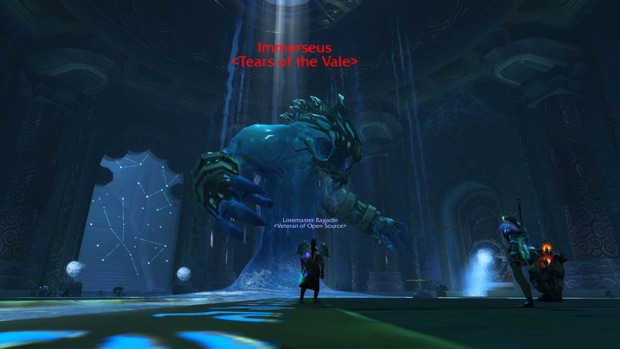 The name of the game ultimately is still PVE content. As a solo player, you progress through the game by completing quests and gaining XP, then completing dungeons in a five man group to get to the point where you can do raid content. XP gains vary by level, and can be affected by multiple factors. Being a part of a high-level guild gets you perks such as increased movement speed and increased XP. Then, for people who have level 90 characters, and some gold to spend, there are “Legacy” pieces of equipment, or BOAs (Bind-on-account). These pieces can be mailed between characters, and even servers, and level up as you do, granting bonus experience gains. In addition, later expansions reduced the amount of XP to hit the next level, effectively speeding up the leveling process. Blizzard most likely realized that there were lots of players with alts who wanted to hit higher level content faster, and the old leveling system amounts were large and could be terribly daunting.

Dungeons are scattered throughout the world, instanced zones where five people group up and complete certain requirements, such as gathering items, but ultimately, killing bosses. There are generally quests in these places that give more XP than normal, and sometimes very nice pieces of equipment. Each boss drops a piece or two of equipment, generally rare or better, that players roll on based on a need versus greed system. People who cannot equip a piece cannot need, eliminating the abilities for people to ninja (steal) loot quite so easily.

And this leads us to Raids. Raids are end-game content, where groups of people team up to fight overwhelmingly powerful bosses. These are longer and more challenging than normal dungeons (unless you count Upper Blackrock Spire, or Blackrock Depths, which take a nightmarish eternity). In vanilla WoW, these were 40 man affairs that were generally poorly organized, and very few people actually attained loot. With an average of three to four pieces of loot per boss, this could lead to frustration for people going week after week, spending three hours a few nights a week to these events and getting nothing. While part of the thrill is the challenge of succeeding, the actual goal is to get better gear to do harder dungeons.

As a player, I have always enjoyed raiding, and it is one of my primary interests in the game, but it is not for everyone. One of my closest friends and his wife play not to raid, but to simply enjoy the game and see the world. For those types of players, raiding will likely hold no interest, nor will they want to group with other players to try and tackle these challenges. There is nothing wrong with this; after all, they pay for the game and can enjoy it however they see fit. But raiding week after week with no tangible rewards (achievements, loot, etc), can just be draining.

But for those who want to raid, no longer do you even have to be in a guild to at least see and enjoy content! There is a new system in place, called “Looking for Raid” and “Flex Raids”. LFR can be accessed via a menu, where you click what role you wish to take in the raid, and which raid content you wish to do. You do not do the entire raid, but instead, a wing of one (say, three to four bosses). Flex Raids are for people that do not necessarily have the group of people to do a normal sized raid. The difficulty scales for the amount of people you have (between 10-25). However, in Warlords of Draenor (the upcoming expansion), this will replace 10-25 man separate raids. This can be unfortunate for achievement hunters, who want two sets of achievement points, but it will make raiding easier. Perhaps a bit too easy.