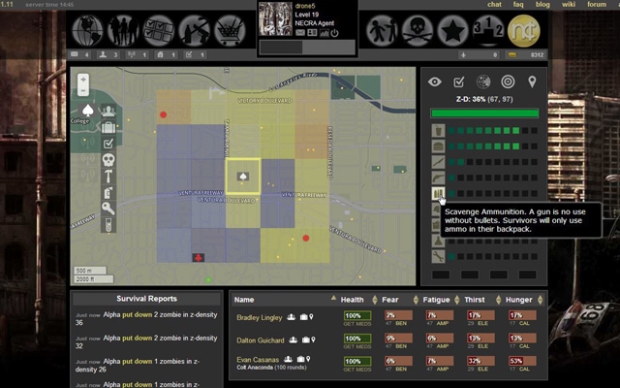 Ballardia, the Irish Game Developer, are delighted to announce that World of the Living Dead: Resurrection is now available to all players around the world after a successful two weeks of stress testing. The Kill Zeds button has been enabled to let players participate in eradicating over 10 million zombies in Los Angeles County, and the endgame mechanic has been adjusted, allowing solo players to win Round 1 and have their name immortalised on the championship trophy.

NECRA has authorised the non-scientific neutralisation of zeds, and the game’s “Kill Zeds” button, kill counter and leaderboards have been enabled. Properly-equipped survivors and skilled squads can engage zombies with realistic melee weapons and firearms. Players and factions can cooperate to reduce zombie density in highly-infested parts of Downtown Los Angeles, making it easier for all to recover supplies and loot in these areas. But beware, combat creates noise and can attract fresh hordes of the living dead…

The developers have also overhauled survivor recovery rates for the next phase of the testing process. This allows players to really immerse themselves within the game and enjoy more regular and rewarding gameplay sessions throughout the day. Unskilled survivors in an unmodified safehouse will completely recover from max Fear in 3 hours, Fatigue in 4 hours and go from near death to max Health in 12 hours. Players can upskill individual survivors among their squads and upgrade their safehouses to further improve recovery rates.

To help fund the further development of the game, WotLD’s NECRA Task Force has launched, giving players the ability to rename any of their survivors, Scavenging, XP and Research boosts, a larger satellite view of their surrounding area, more map markers, custom squad icons to help identify themselves to friends and foes, and advanced data export functionality.