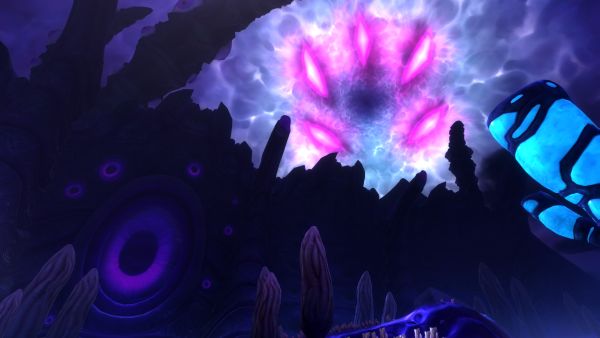 After three whole months of waiting, NCSoft and Carbine Studios are just about ready to unleash their latest content update for their Sci-Fi/Fantasy MMORPG Wildstar. This upcoming content update called “Mystery of Genesis Prime” (also known as Drop 3) will take players through a new zone in Grimvault, and cap off the final chapter of the game’s world story.

The new zone promises to include a handful of open world content for solo players, 5-man parties and large groups up to 20 players or more, so there will be something for everyone to enjoy here. As ready and willing as I was, I was not prepared to handle one of the most grueling tasks I could ever experience in Wildstar… Group Healing!

Yes, just before the press tour had begun, I was set to be the designated healer of the group. I had NEVER done any kind of healing in Wildstar before, or In ANY kind of MMORPG, for that matter, so I was obviously going to be a bit worried, even with all the uber gear that was handed to me. But still, I sucked it up and did my best to adjust to the playstyle within the short amount of prep time that I had.

As the tour began, we rode our hoverboards made of dreams, straight into the nightmare-ish Defile zone to witness some bizarre and not so bizarre things around the environment. For those that have experienced the previous zone in Wildstar, known as “Blighthaven,” then those players will feel somewhat at home, as the new Defile zone has a familiar look, but with a much more different vibe to it: It’s much more dark, moody and has enough purple to make “The Artist formerly known as Prince” jump for joy. 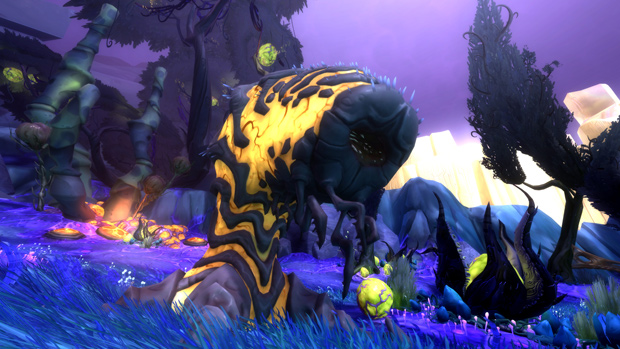 The layout of the Defile zone also has some familiar territories to it: Like in the Blighthaven area, there are six zones that are based around the six primal energies of Nexus: Air, Fire, Earth, Water, Life and Logic. There will be a handful of quests within these zones that players will be able to participate in, in order to further delve into the final storyline of Drusera vs. The Entity or just to gain some cool equipment, housing décor items and even a skill point upgrade for min/maxing. Basically there’s absolutely no reason to skip any of this stuff, no matter how you play.

Before heading off to do battle with of the 5-man bosses in the Defile zone, we took some time to blaze off the tour pass to do battle with some aggressive mobs, each of which does a fairly high amount of damage. Also keep in mind that we were decked out in near raid level gear, so these mobs are not to be taken lightly. This was also the first time I had to put my healing skills to the test, and to my surprise, I was able to keep everyone’s HP topped off, as well as my own. Of course, that didn’t stop our tour guide from getting decimated by standing in red telegraphs for too long.

After we got our tour guide back on his feet, we decided to do a little bit of exploring, and discovered a giant Strain Maw in the middle of a giant crevice. And of course, when anyone spots a giant, gaping hole in the ground, the first thing ANYONE would want (and should) do is JUMP RIGHT IN. 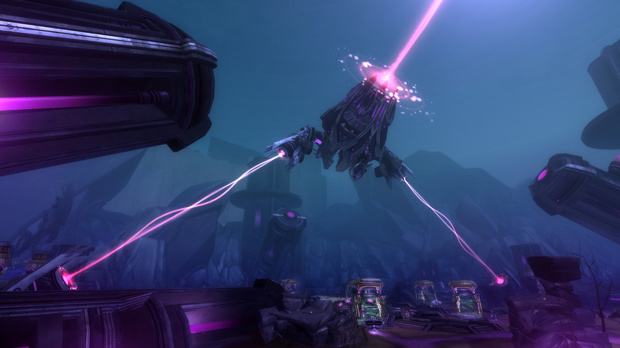 One significant experience regarding path content in the Defile zone compared to path content in the rest of the game is that there’s very little sense of direction, which is a great thing for Explorers and Scientists. In this zone, it actually FEELS like I’m exploring, rather than just heading to a checkpoint over and over again. The new path content here is available for those that are curious enough to look for trouble, and it really makes me wonder why the path content isn’t like this for most of the rest of the leveling experience in Wildstar. I just hope the rewards for completing this optional content is really worth all the trouble. 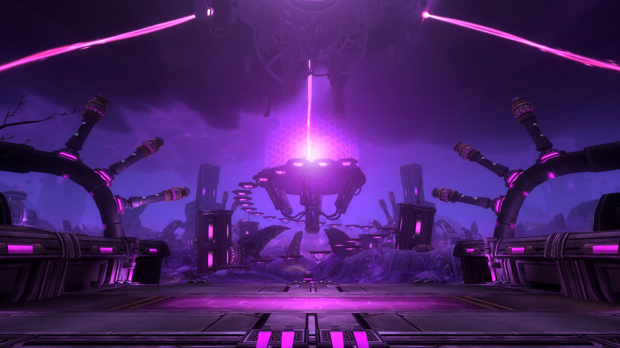 So with that said, we escaped from the giant Strain Maw and went up towards this huge floating platform, which was booby-trapped with electrified platforms, all the way up towards the top, where one of the main zone bosses awaited us. “Koral the Defiler” is a massive, Osun-like boss who uses the six primal energies to defeat its opponents. While I won’t give any spoilers away on how to defeat this boss, I will just say that it’s going to be a lot simpler than it seems. And while this content is balanced for 5-man groups, players are free to bring as many players as they want to make the battle against Koral even easier.

And that was basically the entire tour of from start to finish. Of course, this was only a small portion of the content that awaits players in Drop 3. There was also a 20-man event that was briefly showcased to us, as well as a handful of other events and quests, such as new dailies, WHICH I may add, are on a day-to-day rotation, unlike the dailies that are found in Crimson Badlands or Northern Wastes. So unlike those zones, you may not end up doing the same quests every day.

Overall, the tour gave me a lot to look forward to and a lot of hope that Wildstar can pick itself back up as a quality MMORPG that’s fun for everyone. At the very least, this update should provide just enough to hold people off until the next major update, where the remainder of the game’s core issues will be addressed and fixed.