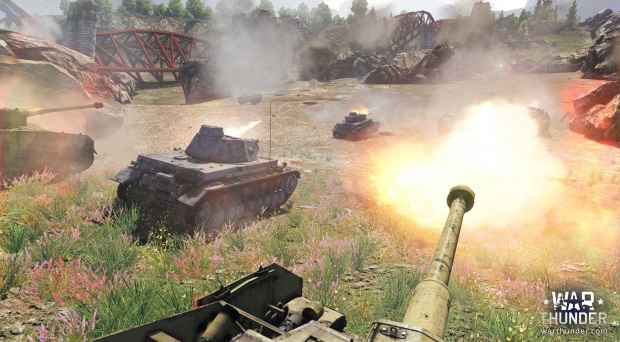 Today, Gaijin Entertainment announced that they have unleashed a full-scale video game invasion with the launch of the Ground Forces Expansion in 1.41 update. The Ground Forces Expansion joins Gaijin Entertainment’s blockbuster military World War II MMO game War Thunder on PC, providing war hungry players the ability to unleash furious battles from either air or land, all within the same play experience.

“Our goal from the beginning with War Thunder was to create a game that allows players to safely experience the perils of a full scale world war. The rumble you hear in the distance, is the sound of many of our six million players launching their earth shaking attacks using heavily armored ground forces. Players who prefer aerial battles better keep one eye in the air and one eye on the ground because Ground Forces Expansion has launched!”, – said Anton Yudintsev, CEO of Gaijin Entertainment.

Ground Forces Expansion joins the ranks of War Thunder, allowing players to now create their own military force made up of aircrafts as well as tanks. With improved player progression, fans can build their arsenal to match their style of play, whether that be with lightning quick strike abilities or with earth rattling shock and awe! Players can now decide how best to build up and unleash their military might upon others in War Thunder’s ever-growing next generation experience.

Currently, players can access Soviet and German vehicles in Ground Forces with other nations rolling out later. There are dozens of light, medium and heavy tanks, as well as self-propelled artillery and anti-air guns. The latter will become useful in Combined Arms battles, available in Realistic and Simulation game modes where player-controlled ground vehicles are fighting alongside player-controlled planes (and AI-allies in some cases). Combined Arms will be enabled later once enough players reach high levels with their ground forces, but anyone can try this mode in Custom Battles already.

Gaijin Entertainment will add additional ground vehicles and new maps in future updates, but developers have not forgotten pilots and their needs. In update 1.41 all of the existing aerial game modes have stayed intact with some tweaks and improvements and 10 new aircrafts, including the powerful US Navy bomber PBJ-1H, armed with a mighty 75-mm cannon, have entered the fray. The Ground Forces Expansion release date on PS4 will be announced soon.