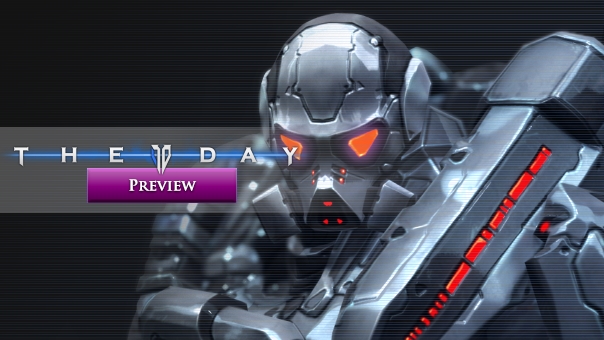 These days in my every day routine I check the Steam store to see if there is anything interesting coming out that hasn’t caught my eye yet. THE DAY Online is another game that I personally wouldn’t have heard about if it weren’t for Steam. This free to play MOBA game where you will fight in a 3D world, and takes a bit of a different approach than many other games. While MOBA games alone aren’t really special anymore, we haven’t really seen one MOBA game do it well when it comes to the classic MOBA genre, with turrets and waves of monsters slowly advancing the board. Is THE DAY Online a game to be played, or another Early Access game to be soon forgotten? Well, I couldn’t wait to find out.

Jumping into the game, you get thrown into the hub. In most Multiplayer Online Battle Arena (MOBA) games you get thrown into a launcher where you will find information about the game, and usually get to a ton of advertisements for products in the cash shop. The hub is a nice and refreshing change for once, and is proven to be very successful in the style THE DAY Online has chosen. From the moment I set foot in this hub, I knew this was an awesome place to hang out in. In the middle of this hub you have a round arena that changes into a free-for-all death match zone for anyone that sets foot in it. Thus right from the get go I was able to figure out the controls really well, and with the addition of the small and simple tutorial I figured out that the controls are like any other MOBA game and can be quickly picked up.

Here I tried most of the playable classes, to test out what skill set they come with and to see what worked the most for me personally. Despite sitting in the queue hoping to get into a game, because player numbers are still very low and the queue times can sometimes take a bit of a while, the free for all arena proved to be a successful feature to keep you busy while waiting. In fact I liked it so much, that sometimes I just preferred to do the free for all in the hub, playing around with the heroes than joining a game.

THE DAY Online is a typical early access game, you can see it is completely new and trying to get its place in the MOBA genre. While the game is clearly not finished, and still feels and look very simple, it definitely has the right recipe to make it. It is one of these truly Early Access games people should give a try, and it’ll hopefully explode into the next big thing, but only if people give it a chance. It needs that slightly bigger push for it to become a big hit. But before I hype up the game some more, let’s talk about the gameplay and why I am a big fan of this game already.

Currently there are two game modes you can queue for. The first is Resource Battle, where you will be fighting over resources and the main focus of the mode is on fighting other players, rather than objectives. The second is Downtown game mode, where you will find a downtown city designed in the classical MOBA style map and concept as we know it: three lanes with towers, and creeps slowly advancing forward, leaving it up for the actual players to change the balance and having them push for the final win. There is also a ranked mode for this second game mode, for the real serious players. Although with the somewhat low player numbers, you can imagine the queue times for this is longer than normal.

This last game mode is what I want to talk about a little more, especially since it’s seen as the game’s main mode because of its ranked addition. The map in which it’s played isn’t really a whole lot different than any other MOBA game. There is a ‘jungle’, alleyways leading up to packs of monsters for players to level up in. There are also bosses scattered throughout the map that can give the player nice bonuses, and even heals to help them in the push some more. Unfortunately right now this particular game mode isn’t quite as balanced; players can simply focus on one lane only, try to push through this lane, and clearly come out ahead when the other team tries to split up and play it in a more classical approach of attacking all lanes. There definitely needs some more tweaking here and there, but the premise is there and it is already a ton of fun.

The game has its limitations, though. It is still very simple and could use a little cleaning up here and there, and broaden the settings some more. The game is a looker, and while it looks simple, it definitely looks good. Although its missing some customization when it comes to changing your settings or controls, it does the job and it is sufficient for now. The audio could use some more work, it is a little quiet here and there, and it does somewhat sound that many of the sounds are placeholders. All of this summarized it begs the question, why are the reviews mixed on Steam?

Many people don’t seem to necessarily hate the game, in fact based on most negative reviews I’d say that the majority do like the game in one way or another. Either the reviewers are really disappointed with the state of the gameplay, that could use some polishing, or haven’t quite been able to experience the game fully because of either issues with joining a game. I think everyone can agree and see the potential of this game, especially because it combines two popular genres and blends it together into one that I like a lot.

THE DAY Online is a little rough. While the game does need some polishing and brushing u p here and there, I think that the game has a lot of potential to get big, if it is in the right hands.

The team behind this game is Reloaded Studios, and as far as I can tell they do not have an prior experience with a game before, and thus I am still a little hesitant of what the future might bring. Since right now the game is entirely free to play, I would recommend anyone to check out this game if you like a good arena shooter, and don’t mind if the game is in an early access state. While I do say it requires some work, I do think that THE DAY Online is better than 95% of the Early Access games of these days, and I think most of the work that has to be put into the game are balance changes to make the game flow a little better. Time will tell if Reloaded Studios has got the right formula, but all I can tell is, it is bloody good fun for a free to play game.