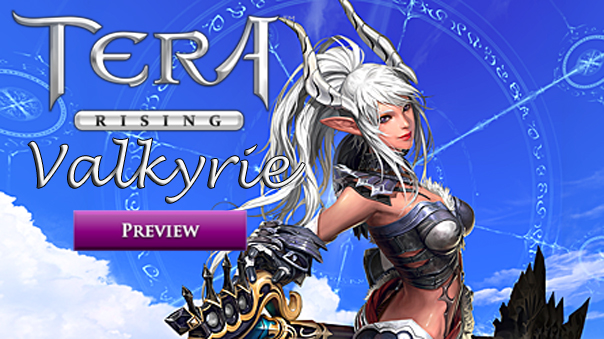 Starring: Ragachak [Best Damage in the World] and his lovely assistants:

Michael Santora (the host of the demo) – Product Manager

And some other nerds as his Valkyrie Assistants

The Honorbound Update is coming to TERA, and with it comes something powerful and new: Valkyrie! They are bound to the female gender [because of course, that’s how Valkyrie work], wield an incredible polearm, and are, frankly, a hell of a lot of fun. This was my first time playing a maxed level character in TERA, so before we all got together to do the dungeon and play as a team, I had to learn how to be a Valkyrie before anyone got there. Valkyries are built around being mobile, dropping tons of damage, and figuring out interesting combos. They gave us one as a teaser, just to help us figure out what’s going on. They build a damage meter, and once it gets to 1000, they can activate the Ragnarok.

Yes, this is a very Norse-themed class. Activating Ragnarok is your ultimate goal in fights where numbers matter. It increases power, attack speed, attack range, and cooldowns [for skills at 60seconds or less for their cd]. It basically makes you into an unstoppable dunking machine, and it resets all of your cooldowns! So you burn all your cool powers [except Retaliation and Evasion], and then activate it. This is also the best time to cast Titansbane, which will give you crit chance/damage buff to you and your allies. Proper communication will make them a frightening force.

They come from a very militaristic society, very much about valor, honor, and peacekeeping. So they’re going to do their part in the crisis versus the Demons, protecting their own and others. As this is one of my first times really getting into TERA, I have to say it was a pretty good introduction to the game. That said, they do have a pretty decent skill-cap. You have to actually know what you’re doing to produce the maximum amount of DPS. You can’t just hit combo, combo, combo, and then win! That’s not how this works. There are a few things to keep in mind while playing a Valkyrie. Positioning is critical. Since in this game being behind the enemy is key for damage/criticals, you will want to be aware of how your skills move you. Most of your skills will move you, so this also brings the concern of “will this flip/dash/hurl me into fire”? It might. So just be aware of what each skill you have does, how it works with others, and where it can potentially throw you.

Another key point for the Valkyrie are “Runes.”  As you land criticals [see? Told you positioning mattered] you generate Runes, which will show up as glowing dots on the enemy you are targeting, reminiscent of Fist of the North Star.  You can detonate these with RMB for tons [and I mean TONS] of damage. I believe you can have seven up at once, so you’ll want to build as many as possible. However, if you kill the enemy without activating Runeburst [RMB], you can pull the Runes back and hold them for another target. It’s really all about management of resources, positioning, and knowing when to detonate and on what. Some of your abilities will reset the cooldowns of others. One example is activating Leaping Slash, then Windslash: it will reset Leaping Slash, allowing you to do it again! If you hit something with Dream Slash while the target has at least 1 Runemark, you’ll generate another Runemark, and reset Leaping Slash. Using Spinning Death and landing a three hit combo with it [using it three times in a row with success] will also reset Leaping Slash. One more: Your basic attack, Slash, the fourth hit in a row will reset Leaping Slash. Do you see the important ability here? It’s all about how you get runes down, creating combo opportunities, and detonating at the right time. You can also just… you know, mash LMB [Slash] and when the abilities proc or are ready, you can hit Space Bar to do the proper skills. In that, they kind of make it easy to do damage, but I don’t think it’s the most optimal way. If you’re feeling lazy and just want to blow through waves of villains, that’s a great way to do it. But if you’re fighting bosses, elites, or anything relevant, I would not even dare try to do that. I also think they’re going to be pretty brutal in PVP. They have at least one stun, lots of damage, and enough mobility to get around annoying people. I don’t know enough about their PVP to make an informed opinion; I do think they’ll be fun in that avenue though.

When All is Said and Done

Valkyries are going to have a critical role in any raid or party, I can see it now. Each stack of Titansbane is 30% damage buff and it also offers more criticals, which means more runes, and more damage. That buff is party-wide, and that will be a fantastic Bloodlust style move [it is on a 6 minute cooldown], and that in and of itself is more than enough reason to bring them to a battle. They do lots of damage, they can move around the battlefield with grace. I love the class, and I think it will be what will lure me to the game to experience it in a light that I haven’t in quite a long while. I would definitely like to thank the En Masse’ team for grouping with me for a dungeon I have never tried, in a part of the game I have yet to experience!  I had a blast with both the team, and the class itself! You TERA fans are going to love the Valkyrie, I promise!