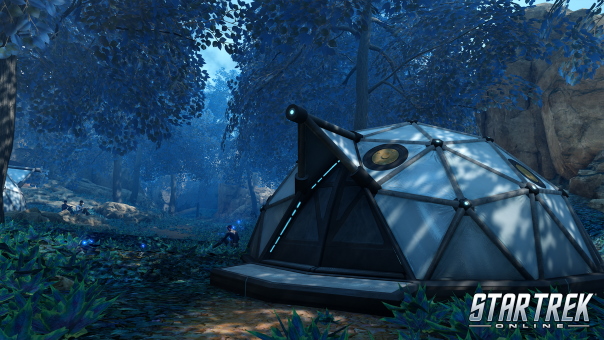 Press Release
The time has come for Star Trek Online players to return to Pahvo, the mysterious forest planet that was first introduced in Star Trek: Discovery and featured in the game’s Awakening update. From May 7-28, captains hailing from all of the game’s factions can participate in the Defense of Pahvo Event on PC, Xbox One and PlayStation4. This limited-time event gives players the opportunity to win a KIDD Drone Universal Kit, by completing two popular Task Force Operations (one on ground, one in space) that take place on the planet, Pahvo. Defense of Pahvo is just one of many special events that Star Trek Online’s captains can look forward to in the coming months. Today the dev team released a New Roadmap that reveals what’s coming up for the free-to-play space MMORPG.

Here’s a brief overview of what’s next on deck for Star Trek Online:

Defense of Pahvo Event: May 7-28 on all platforms

Captains can team up with four other players to take on the ground TFO, “Pahvo Dissension,” or enable a new blockade of satellites in the space TFO, “Peril Over Pahvo.” Players who complete this event will earn a KIDD Drone Universal Kit Module, which can be applied to their entire account. Additional details available here.

Winter Event: Now through May 4 on all platforms

It’s winter in the spring! Players have a second chance to win the coveted Fek’Irhi Fe’Rang Dreadnought Carrier by returning to Q’s Winter Wonderland and completing challenges that are usually only available during the holidays. Additional details available here.

Medical Pack Giveaway: Available now on PC and on consoles May 7

To pay a small tribute to the real-life medical heroes out in the world, Star Trek Online is giving away a free pack to all players, which includes a Vanity Shield, Holo Bashir Bridge Officer (Federation), Emergency Medical Hologram Bridge Officer (Klingon) and a new Admiralty card for the medical ship, the U.S.S. Hope.

Last fall, Star Trek Online announced a partnership with Hero Collector to create real-life models of the game’s most popular starships. Pre-orders for the first two ships, the Chimera-Class Heavy Destroyer and the Gagarin Miracle Worker Battlecruiser, are now live! For additional details and a look at all of the ships included in the new Star Trek Online collection, click here.