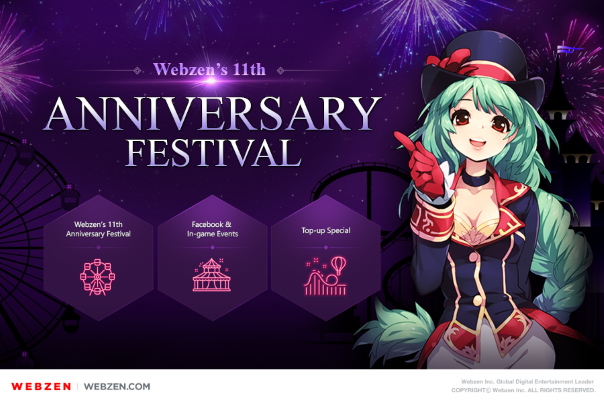 Webzen will be holding an amusement park event to celebrate the 11th Anniversary festival. During the event period, all players are welcome to visit the official website to enjoy the festival by collecting W-Steps. After acquiring steps, players can try out five different rides from the amusement park which gives out special gifts. To earn more W-Steps, players are encouraged to visit the official Facebook page and log into one of Webzen’s participating games.

In addition, all Webzen games are hosting their own in-game events to celebrate the 11th Anniversary. MU Online players will have the chance to boost the levelling up of their character on the Speed Arcadia server again. As the server reopens, players can participate in a giveaway event which will reward players with Gold Channel Ticket 7 days, Blood Angel Box, +9 Divine Archangel Weapon, and more for free. Also, as players reach certain levels, they will be rewarded with special items.

Flyff players can participate in an event to collect Easter Eggs from defeating monsters over level 15. For each 100 eggs earned, players can exchange 1 Egg Basket, which contains different kinds of items to enhance gameplay.

In Rappelz, the Devildom Purge event will be held during the anniversary event period. Players will have +10% enchantment bonus and receive coupons every hour they play the game, which can be traded into high enchanted gears. Furthermore, players can enjoy the Easter Egg event to receive extra buff items.

To continue with the festive mood, Webzen will be running fun events on its official Facebook page. A share event, a quiz for each participating game, and a one-for-all giveaway are ready for players to join as they can receive in-game items such as the Deva’s Blessing, Pride of Victory, Rune: Halloween Ghost Set Box, Talisman of Ascension II, Wizard’s Ring, and Bless of Light. Moreover, players will have a chance to win Wcoin, the virtual currency used for purchasing in-game items, in the share event. Webzen fans can check out how to grab freebies and rewards on the official Facebook page: www.facebook.com/webzengames

Furthermore, a top-up bonus up to 30% and extra rewards will be available for the entire 15 days of the 11th Anniversary event. For more details, visit the official website: www.webzen.com/events/Anniversary11th/