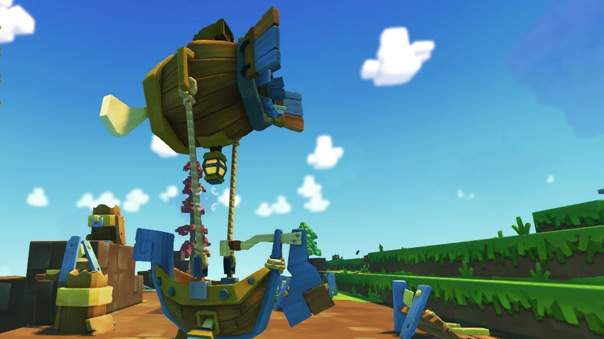 Voxel based games are nothing new any more. There, I’ve let the elephant out of the room so there’s no further discussion required. Of course, there’s nothing wrong with one if it offers a good time. Radiant Worlds is seeking to do just that with SkySaga. I had a chance to test the alpha version of the game to answer one simple question: does it provide a wonderful experience, or will it crumble under the might of voxel-based giants?

Creating a character in SkySaga is a simple matter of choosing a race (between human, lizard, and cat), your favorite color, and using a few customizations such as skin tone, eye color, and hair style. I chose to play a cat, because the game’s art style really lends itself to the race. Currently, names are reserved on the SkySaga website, but I would imagine you’ll have the ability to name the characters in game at a later date. 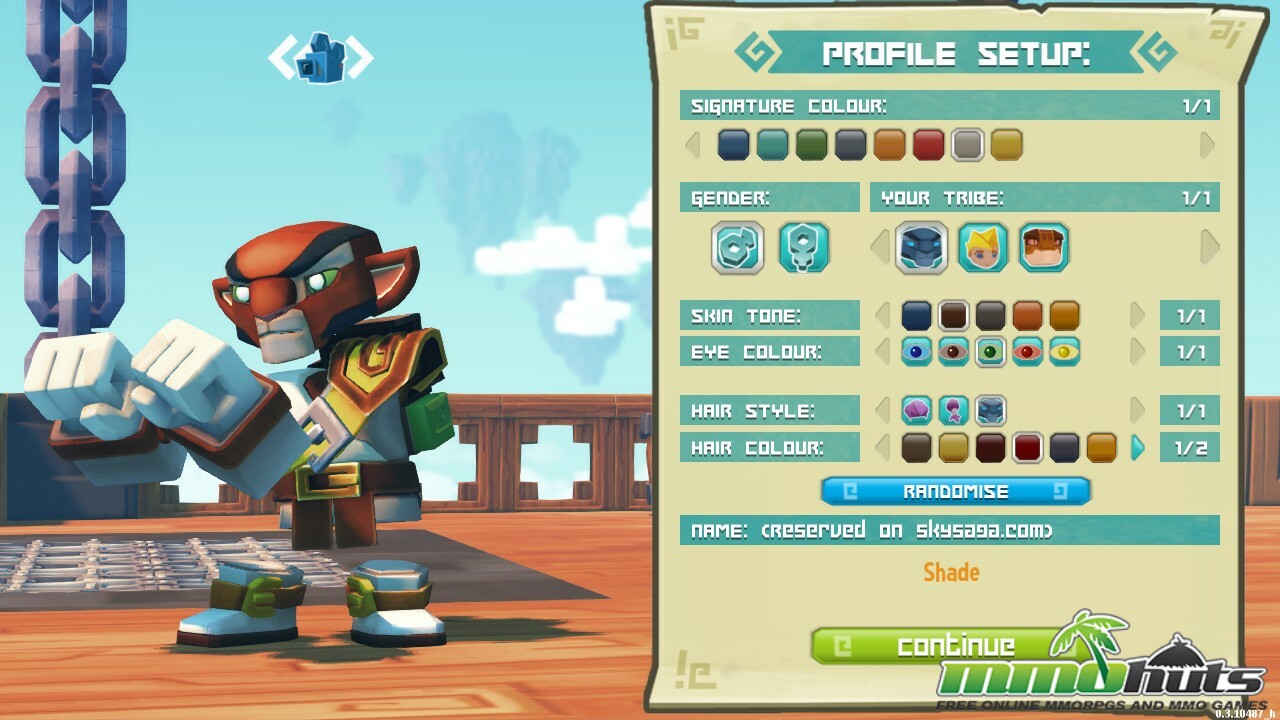 Upon crash landing on a floating island (how many games can have that as their opening?!), you’re then tasked with gathering items to make a base of operations. The tutorials provided really help with the early style of play, but later character advancement may leave you scratching your head a bit. Still, SkySaga guides you all the way up until your first unaided adventure, giving you plenty of freedom afterwards.

Wanderlust Has No Blocks

First and foremost, SkySaga is all about exploration. The game wants you to wander around. New treasures and crafting recipes can only be found in chests scattered amongst the random worlds you adventure in. It’s not all exploration, though; plenty of bandits want your stuff, and the local carnivores (I saw plenty of wolves and even a bear) might find you a tasty treat if you’re unwary. Luckily, you’ll have some means of defense when you go through the tutorial, even if it’s just a pickaxe.

One of the most impressive things for me was how dark the nights were. If you weren’t carrying a torch, you only had a very limited view, and had to rely on points of light in the distance to guide yourself with. Thankfully, carrying a torch in either hand emits light, unlike some other popular voxel-based games. Additionally, seeing plenty of terrain types that flowed naturally into each other was a joy, like snow capped mountains leading down into more hilly terrain, and then into more of a flatland style area. I’m not sure if this was just my own experience, but if it’s intentional, praise must be given for such thoughtful implementation.

Quests in SkySaga should be recognizable to most MMO players. What may not be so understood, however, is all the quests for each path are self-driven. This is one of the places where the tutorial fell flat, in my opinion. It directs you to where they are, but then fails to show you how to track them (it’s a button next to the task, by the way). You start out with five different paths, and as you complete the tasks in them, you gain experience. As you gain experience in the paths, you gain new skills, and even the ability to craft new items. You’re also not locked into running a single path, so feel free to track any and all paths equally. 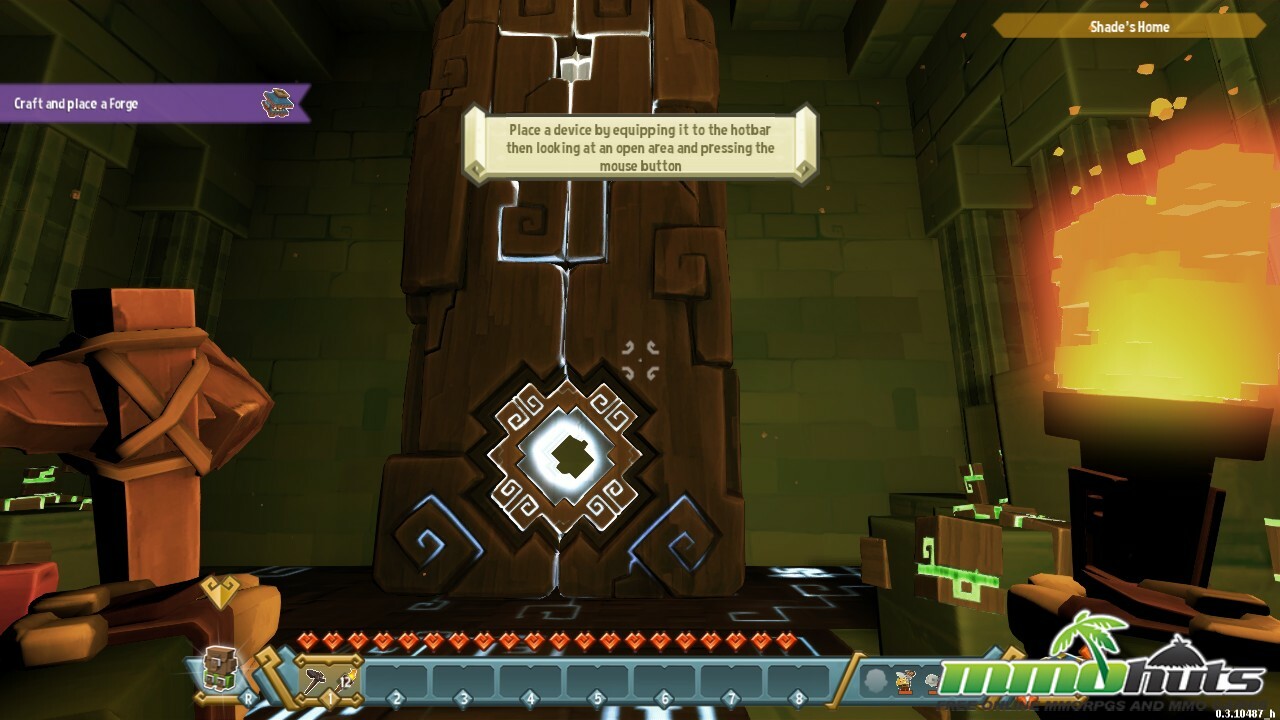 Blacksmithing Is So Metal

Crafting, as expected, is a huge part of SkySaga. Weapons, armor, new crafting stations, portal keys (used to go on adventures), base decorations, and several other items can be crafted. The crafting stations even go so far as to tell you what parts you need to make the specific items, and even then, it’s nebulous. For example, if an item calls for metal ore, it doesn’t care what type of metal; iron and gold will create the same item, but the appearance will use whatever metal you did.

With its colorful design, very smooth gameplay, and variety of content, SkySaga is an example of a voxel-based MMO heading in the right direction. Crafting feels important, and yet is also kept simple. You’ve quite a bit of freedom to build a base entirely how you see fit. The game even has its own camera, which is a lot of fun to try and snap the coolest of shots. It’s not without some problems though. Crafting certain things — armor especially — is incredibly resource intensive, almost unnecessarily so. Some of the tasks the game provide can be downright frustrating; I went through five different maps trying to find ice voxels to finish an explorer quest with no luck. 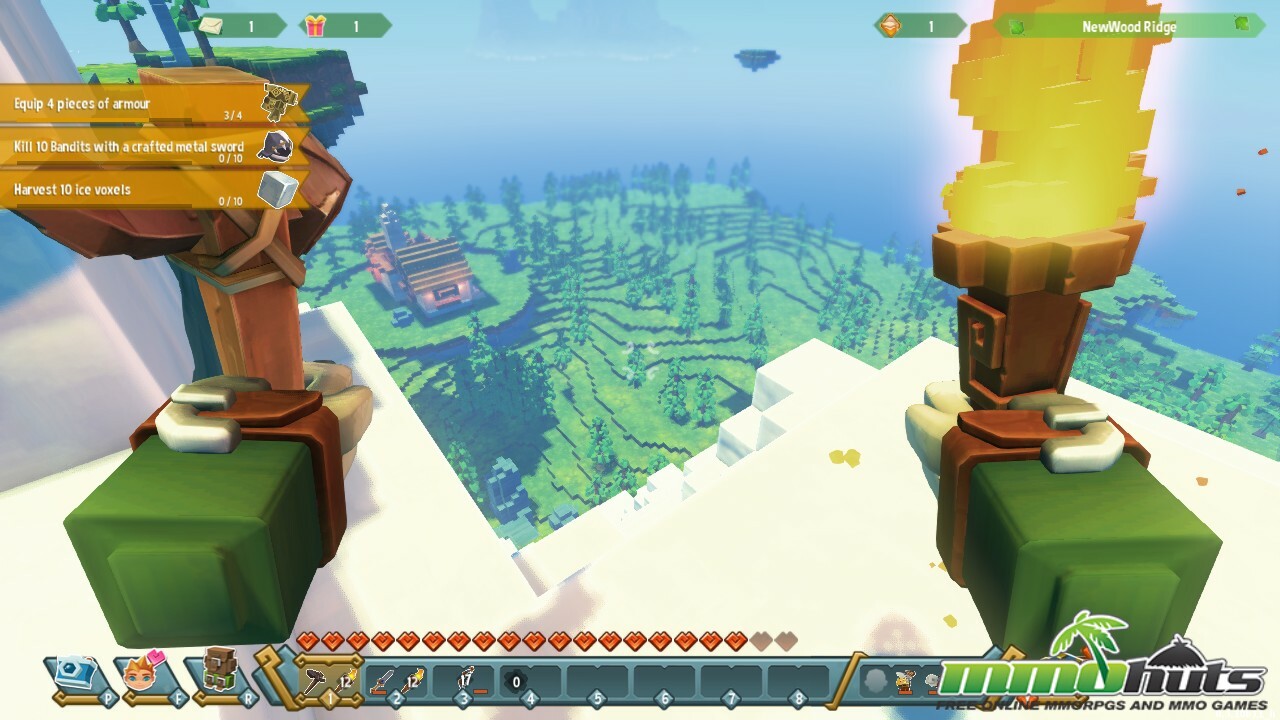 When climbing as high as SkySaga's ambitions, don't ever look down.

It goes without saying that a lot of the frustrations might be ironed out in later testing phases. After all, alpha testing is quite early in the developmental stages. SkySaga still has quite a bit of charm to it though, and really does offer something for almost every type of gamer, including PvP (which I sadly did not get a chance to experience). In its current state, SkySaga is definitely worth getting interested in. With the further polish future updates bring, it will be all the more enjoyable.