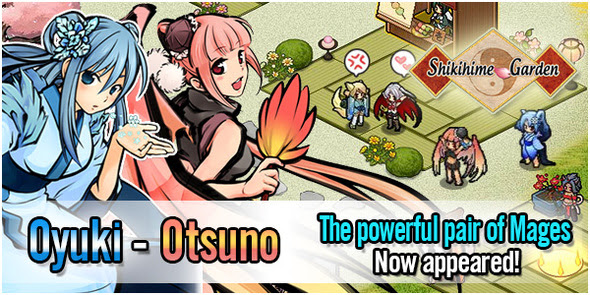 The 2 new cards, namely Otsuno & Oyuki, belong to the highest class of Shikihime so far. Otsuno uses powerful magic that is a nemesis to opponents using sword or axe. While Oyuki owns elite recovery skill that is very helpful at restoring HP for her teammate in battles. Appirits also emphasized that the summon rate for these 2 cards would be DOUBLED in 1 week since the release. And note that they are available for Gold Summon only. At the present, there are 7 races of Shikihime that players can summon by using Power (charged points) or combining from other normal cards through Unity feature.

In addition to the 2 new extremely rare cards, there are other updates and events announced also, such as the release of event-only Garden Summon button which is used for the 1-week event of Garden Festival and some new garden ornaments for decoration purposes. During the event, players will get Garden Tickets for free to summon special ornaments for their gardens. More details of these updates can be found on the game’s main website.