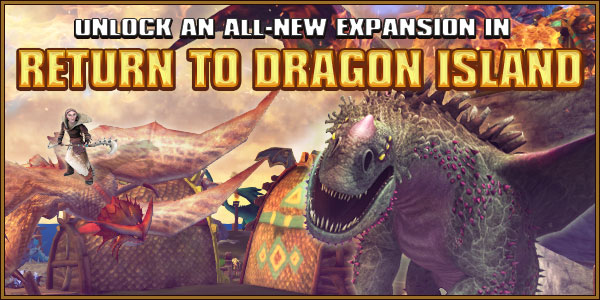 JumpStart today announced a new expansion for their kid friendly How to Train Your Dragon themed MMORPG, School of Dragons. Return to Dragon Island focuses on new content coinciding with the Netflix original series airing today, Dragons: Race to the Edge! The expansion includes 21 new quests, four new areas, mysterious new dragons like the Singetail, and the introduction of new characters including Valka and Eret from the feature film How to Train Your Dragon 2.

In Return To Dragon Island, a mysterious thick fog has begun to expand across the waters of the archipelago, sickening, and stranding fellow Vikings! Players must first rescue them, before embarking on a journey to discover what the fog is, and from where it is emanating. As players venture outside of Berk, they can sharpen their minds through new learning-based quests in which they’ll learn about core scientific concepts like earth systems, physical sciences, and engineering technology. The launch of Return to Dragon Island also coincides with a School of Dragons 2.0 update, which brings the game fully up-to-date with major plot points from the How to Train Your Dragon 2 movie – including the introduction of Valka, Hiccup’s mom.

All current School of Dragons members will receive access to the new expansion pack for free for the duration of their membership, while non-members have the option to purchase Return To Dragon Island for 1250 Gems. School of Dragons is available to download on iTunes®, Google Play™, Amazon®, Windows, Steam and online at http://www.schoolofdragons.com/