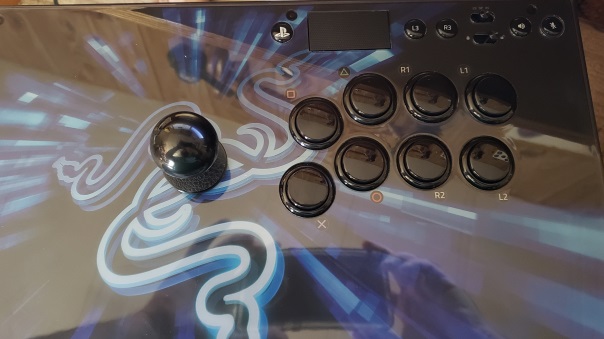 Editor’s Note: Sorry, I’m still trying to break myself of the habit of mashing extra inputs, so there’s a fair bit of that in the video footage. Games featured in the video: Street Fighter V, BlazBlue: Central Fiction, Skullgirls.

I’ve been a fan of fighting games since Elementary School when I first got my hands on Street Fighter II in the arcades. I have fond memories of sleeping over at a friends house, staying up all night and playing SFII on the SNES (which was a far superior version to the Sega Genesis release, I might add), and no matter how bad we were, we had a great time getting into the game. Though my attitude and opinions on playstyles have changed dramatically since those days, I still prefer playing on an arcade stick. That isn’t because I think playing on a stick makes you better. That’s important to note: Playing on an arcade stick does not make you superior, does not make you better than other players. There are folks with that attitude, and they could not be more wrong. This includes using Hitbox Controllers. Use the controller style that fits you. I just happened to grow up playing fighting games in arcades, so there are games I prefer to play on a stick. I’ve owned a few in my day, and personally, I miss Mad Catz and their arcade sticks, but since that was their main focus, they were doomed to failure. Enter Razer! Razer has such a wide variety of products that it was only a matter of time before they moved towards arcade sticks.

I missed out on the original Panthera stick, but Razer recently sent me the Panthera EVO stick to review. It wound up being a sort of revival for me, getting me back into fighting games again. I had several to test it on: Street Fighter V, Melty Blood, BlazBlue: CentralFiction, Dragonball FighterZ, and Skullgirls. Seriously guys, go play Skullgirls. It’s amazing. I’m including some video footage so you can hear the button presses, which I think is important. The latency when I was playing on PS4 (SF5, Blazblue) and PC (Skullgirls) was nice and low. This is important, you don’t want to hit a button, then wait forever for it to actually go through in-game. In terms of parts, it uses a Sanwa Denshi Gate for the stick, and Sanwa Denshi buttons – an industry standard at this point in time. A gate is a plastic piece under the actual joystick, and is often called a “restrictor gate”. This one has a Square Gate, but an Octagonal Gate is better for players who need a smoother 360 motion (grapplers, primarily). I know a fair amount of players who prefer an Octagonal Gate.

The buttons, while Sanwa, feature Razer’s proprietary keyboard microswitch technology that you’ll be familiar with in the Razer keyboards. From what I’ve read, you can likely replace them with other pushbutton tech, but I imagine it would take some soldering to do. If I were big on getting on the inside of my stick, I’d probably be frustrated at the seven screws you have to unseat in order to customize it, but I’m happy with the buttons and gate that it features already. I’m a fan of Sanwa buttons, and so I’m very happy with how this stick feels and the space between the buttons. I don’t feel like I need to stretch my pinky a hundred miles just to press a button on the end of the stick. The body of the stick itself is a bit smaller and lighter than your average stick, and I can see some people not being a fan of that. But for travel/packing/carrying purposes, that’s a delight for me. There’s another thing I want to point out, compared to the last Razer Panthera stick – it has a headset jack! If you’re going to play online and train with your friends, it couldn’t hurt to be able to talk to them. Sure, you can use the other USB port on your Playstation, but that might be taken up. I just think that sort of thing should be on the controller itself.

From what I understand, this is not an upgrade over the original Panthera, more along the lines of a redesign. Though you do need tools to get into the bottom of the stick and replace buttons, switches and the like, I do appreciate the color-coding on the bottom of the stick proper, so you know what is supposed to go where should you get confused. I’ve always been leery of opening my sticks and tinkering with them. However, the part I do care about, replacing the artwork is incredibly easy. The thick plexi on top of the stick is easy to take off, and there are no annoying adhesives to worry about. One thing though I’ve always hated about arcade sticks is how loose the balltop feels. That’s every stick I’ve ever owned, it’s not a negative, it just distracts me.

I will say though, while it’s not what I prefer to use for every fighting game (I’d rather use a pad for DBFZ, for example), it feels comfortable, it doesn’t take up as much space as my QANBA, it’s responsive, and it’s definitely worth it. I miss the Mad Catz line of products, but the Razer Panthera EVO is a nice replacement for it. The layout of all of the buttons makes sense, and though it may seem like a weird thing to be happy about, I’m glad the L3/R3 buttons are on top of the stick, not off on the side like my QANBA. I do however wish it were Playstation 3 compliant, but I have a stick for that, I suppose. But I would much rather use this one. The layout feels better, more comfortable for me. I also wish that it wouldn’t show up in Skullgirls as an Xbox 360 controller, I do wish it would show up as a Playstation controller. I can see people who want to get inside and customize being a little frustrated, but the actual response time for the stick felt very good to me.  Those minor complaints aside, it feels good, it’s responsive, and I do recommend it for the casual and eager player alike who are considering an arcade stick.

The Razer Panthera Evo was provided by Razer for purposes of this review. A link can be found to it below. It retails for 199.