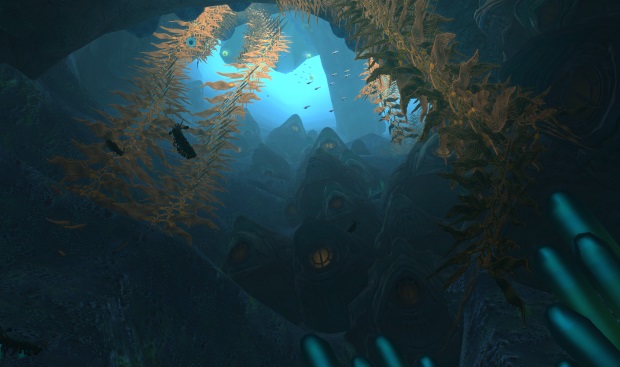 The second part of our excursion into Trion territory brought me face to face with some of the longest standing members of the Trion team to get a rundown on the second expansion to RIFT, Nightmare Tide. Now most people who don’t follow RIFT religiously (I would be counted into that boat) but have glanced at their sight from time to time might be curious as to how this is only their second expansion. The game has been updated with tons of epic new enemies, new zones, tons of soul changes, wild plot twists, and even some fluff like player housing since its original subscription-based launch in March 2011. Well the exciting news is this shows Trion doesn’t toss the word expansion around lightly, and when they do, you can expect a hurricane of new content. As that’s just what Nightmare Tide intends to bring with new end-game zones, some of the must brain twisting puzzles yet, an expansion of the soul system to 65, and a new competitive form of Rifting. 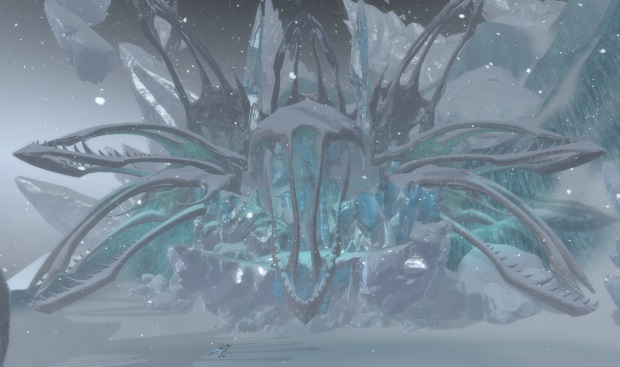 For starters, Trion made it clear that they now realize there are two types of expansion rushers that they want to cater to equally, starting with this update. The first is those that need to see the new areas and start grinding up to the new max level as fast as humanly possible. For them, the Porticulum Masters will offer an instant ticket straight into the action. If you’re a member of the more lore driven stop and smell the flowers type of expansion junky, a vast and story rich questline awaits you to ease you into the nightmares coming in with the tide. 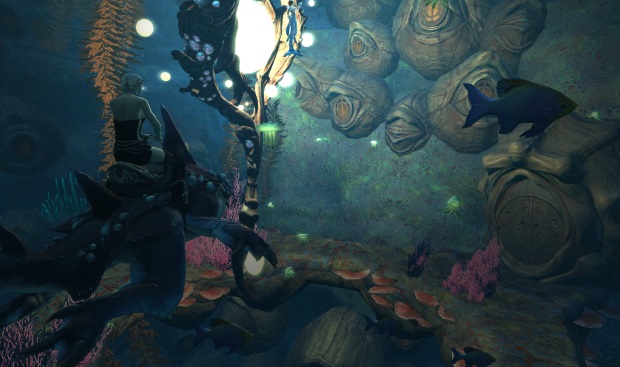 So what exactly is going on in Nightmare Tide? Well a Risar known as Draum is responsible for managing the water dimension of Telara. But as always, RIFT isn’t your simplistic MMORPG so don’t expect an endless sea of underwater content just because it’s a water themed update. RIFT always connects tertiary themes to each of the elements, and in the case of Nightmare Tide, the best scholars in the land have discovered a link between the dreamscape and tidal energy existing on the Plane of Water. In terms of gameplay this means you can expect mind bending puzzles and the downright surreal, such as swimming in an ocean that suddenly no longer exists, only to look back and witness a vision not too far off from your typical Moses parting the seas picture. In terms of story, you’ve got Freddy Krueger on steroids, as the further Draum’s dreams are disturbed by the living embodiment of nightmares, Demogos, the worse off reality is going to become for those living in Telara whether awake or asleep. 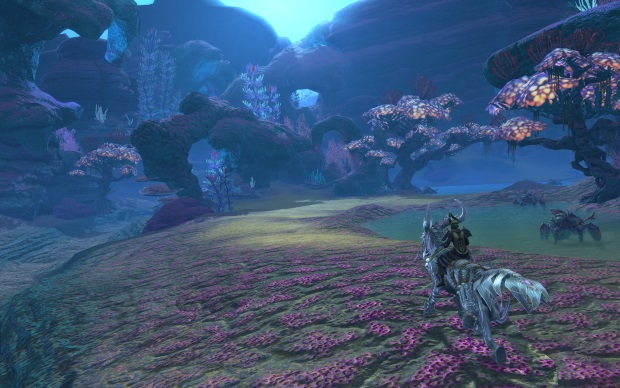 As I mentioned earlier, you shouldn’t expect to see a tidal wave of underwater content in this expansion. Trion performed gallons of player testing to figure out the ideal balance and decided that roughly 10% of the content being underwater should suffice. But that 10% is some of the most breathtaking landscapes ever seen in the MMO space, and what a shame it would be to not get to enjoy it to the fullest due to rushing back to the surface every few minutes to catch your breath. As such, drowning will not be implemented in these zones, so you can take your time exploring the majesty of the new zone, preferably on one of the upcoming amphibious mounts. The best way to describe the experience is scuba diving in the famous South American and Caribbean underwater caverns, as this clearly influenced the art design of the team. 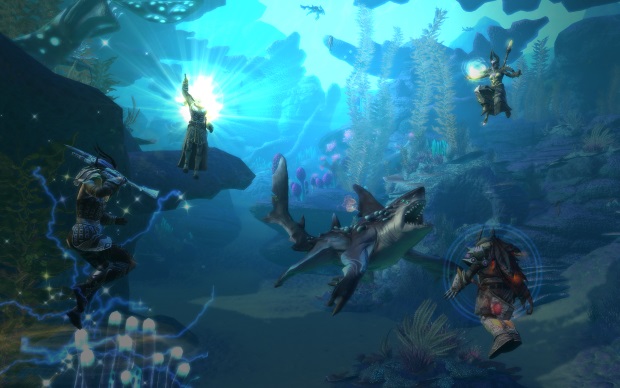 Another issue I asked about that’s all too prevalent in rushed water-based MMO content is monster animations. My fear was that with the sudden vertical wall water cut offs, you would see awkward behavior and even more awkward combat animations as players attempted to game the system by pulling dry land creatures into the water and water creatures back to land. Trion responded by making it clear that there would be water monsters that remain in the water, land monsters that won’t venture into the water, and a couple quite horrifying amphibious monsters that will adjust their combat animations appropriately should they chase you across the divide of one into the other.

Oddly enough, an expansion focused on the Plane of Water will feature new content in a frozen tundra as well as a dried out industrial husk. The Bloodfire Army makes their triumphant return in this expansion with a new ploy to transform the power of the Coral Worldtree into a mining super facility. Just imagine a metallic Yggdrasil surrounded by Sauroman’s Orc factories from Lord of the Rings, and you have a decent grasp on what’s going on here. 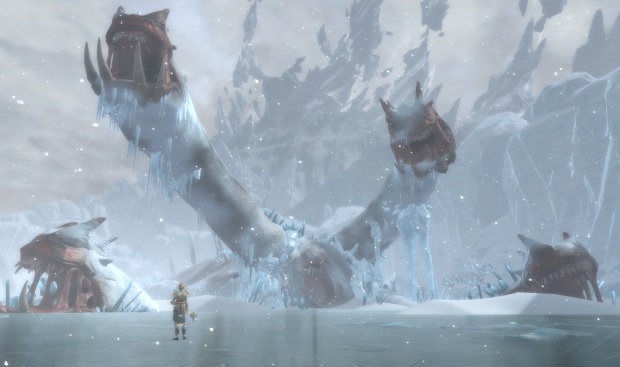 On the ice side of things, Trion is introducing some new end-game raid dungeons with a distinctly Cthuluionic theme. At the heart of the Cosmo Mountains at the Tarken Glacier, players will delve into Mount Sharax to face exactly what you would expect when melding all said themes together. Nightmarish squidy creatures creaking about with half frozen bodies in the most bone chilling of ways. Though if the thought of raid content beyond anything you’ve faced before isn’t scary enough, the Nightmare Rifts might just be the challenge you’ve been waiting for. 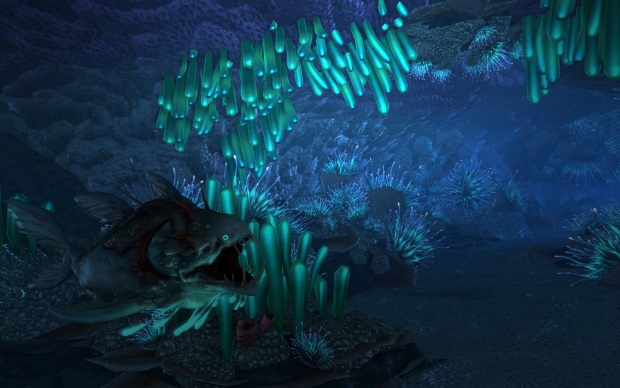 While initially planned for end-game content, Nightmare Rifts are a new form of challenge mode Rifts that will soon be opening up randomly and scaled to the level of their respective zone. These are pure and simple Rift gauntlets that will push players to showcase their maximum teamwork and efficiency by defeating one challenge after another within a given time limit. The faster a team progresses, the more points they earn (and surely the fatter the loot) as well as the glory of marking their place upon a new hall of fame leaderboard to showcase the best Nightmare runners in Telara. 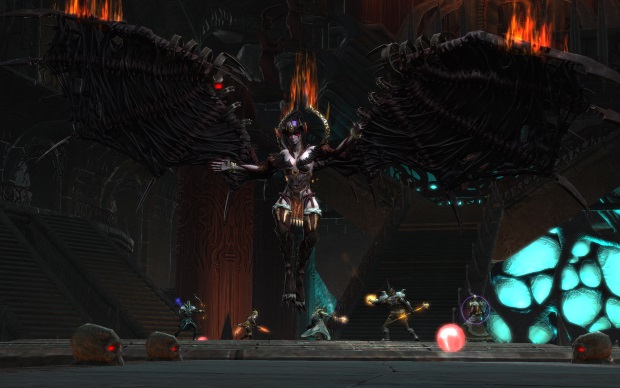 A new strategic twist added to these Rifts are special power-ups that can be used to give your team that slight edge needed to continue to the next stage before time runs out. They’re quite limited though, so you can expect having to make the tough decision of gambling to go on without it, or giving in to the lure of extra power only to be overwhelmed shortly after when you truly needed it. Though given the open world nature of Rifts, some plans are in the works for instanced editions of these nightmares to help organized guilds aim for the gold without having to worry about slackers upping the difficulty or stealing power-ups without contributing much to the fight.

As for diversity, the developers literally could not recall on the fly how many new bosses are being released to spice up Nightmare Rifts. After a few moments of thought, they threw out the ballpark number of 120+, so don’t count on memorization as the key to overcoming these trials. 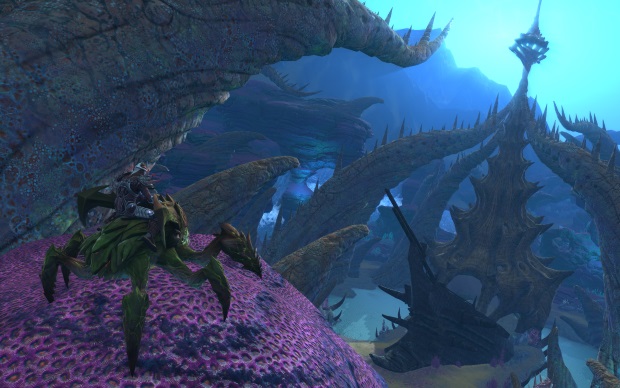 In addition to the four new soul types previously announced, Trion is opening up five new levels of soul evolution to expand end-game options. However rather than offering a giant middle finger to their balancing department’s hard work over the past year, these expanded levels will work a little differently compared to the pre-60 soul options. Rather than giving new overpowered abilities worthy of being end-game levels, you instead obtain powerful masteries intended to offer powerful synergistic boosts between various class soul combinations you have picked. This will not only bolster the effectiveness of current popular combinations, but make less commonly used combos more viable depending on how you go about choosing your masteries.

Ideally their goal is to offer more diversity in player decisions without full on turning the game on its head. And unfortunately I’m not an experienced enough player to say for certain how well I think they’ve succeeded, but I imagine the game forum warriors will have plenty to say shortly after launch. Luckily you can just experiment to find what works for you on your own time as the new masteries are designed to be flexible, with the ability to swap them out for new options at any time you find yourself out of combat. 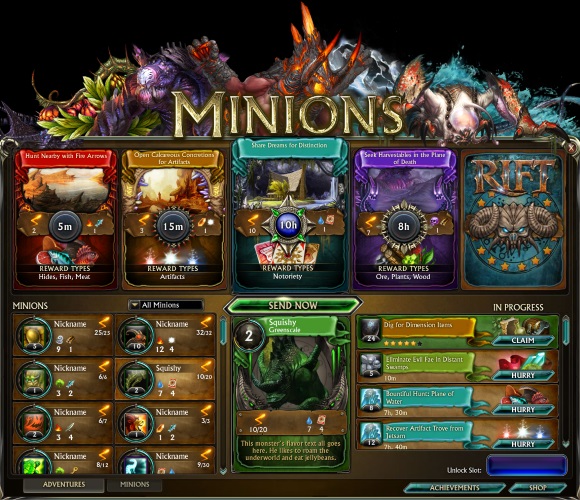 Perhaps the least thematic part of the expansion will be the most welcome to some players, as the Minion system arrives in RIFT. If you’re unfamiliar with similar systems such as SWTOR’s companions, then here’s the rundown. Players can collect miniature versions of various iconic figures in the game such as the raid boss Greenscale. In addition to being fully 3D modeled trading card characters, these beings can be sent out on missions to passively unlock rewards for you. Doing so can level the minions to greater heights, and you will want to gather a large variety of them to gain a good range of specialty types. Each mission has certain key elements that certain types of minions may excel at, such as a minion carrying mastery over wind or being a skilled assassin. Assigning a Minion that matches the requested specialty of the mission can net you bonus rewards. Another incentive to collecting multiple minions is that each minion operates on its own stamina system, so having enough back-ups to keep your minions running wild whenever you have the time to assign them tasks is ideal.

When asked about the future direction of this initiative, Trion made it clear that the Minion concept is still an idea floating in the clouds. They are going to push it live with this expansion and wait on player feedback to see where to go next with it. I’d place good money down on betting that Minion PvP battles will be making their way into the game in the near future.