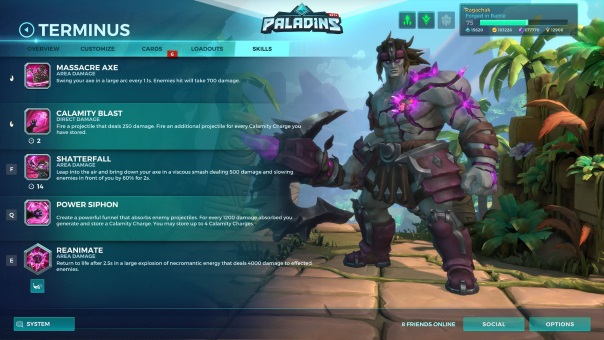 Is it just me, or does every single card from Terminus’ build sound like it’s from a Metal album? Powerslave is one of my favorite Iron Maiden songs, as an aside.

Okay, I haven’t done a build breakdown/impressions for a Paladins character in a while, mostly because I’m not really that good at Flankers. Maybe I’ll pull someone in to guest-star for those for me. That could be fun! Terminus, the Fallen is the latest Paladins character, who released last week. He’s a frontliner and is one of the rare ones with no Shield ability. But after just about a week of playing him on and off, he could be my next favorite next to Torvald. He’s also the biggest character in the game (I believe they said he’s close to 7 foot tall?) and is the only true melee character in the game. There are people with daggers and swords, but they all shoot/throw those weapons. What’s Terminus’ ranged weapon? A tiny shot that he can get a few extra charges of with his Q. Other than that, he wields the mighty Massacre Axe, dooming anyone in front of him to perish at its blade. I’m definitely interested in his lore, and he has a very high-risk/high-reward playstyle as far as I’ve seen. The lack of a shield, using instead the power to absorb incoming shots really changes how you play a tank. If you have a healer, he’s pretty damn sturdy. His kit comes with a lot of options to reduce incoming damage, even before items in-game. I say “if” he has a healer because most of my casual matches with him I did not have that luxury. And if there was a healer, they would inevitably disconnect. That’s not indicative of the strength of Terminus, but more of the “casuals don’t matter” culture. 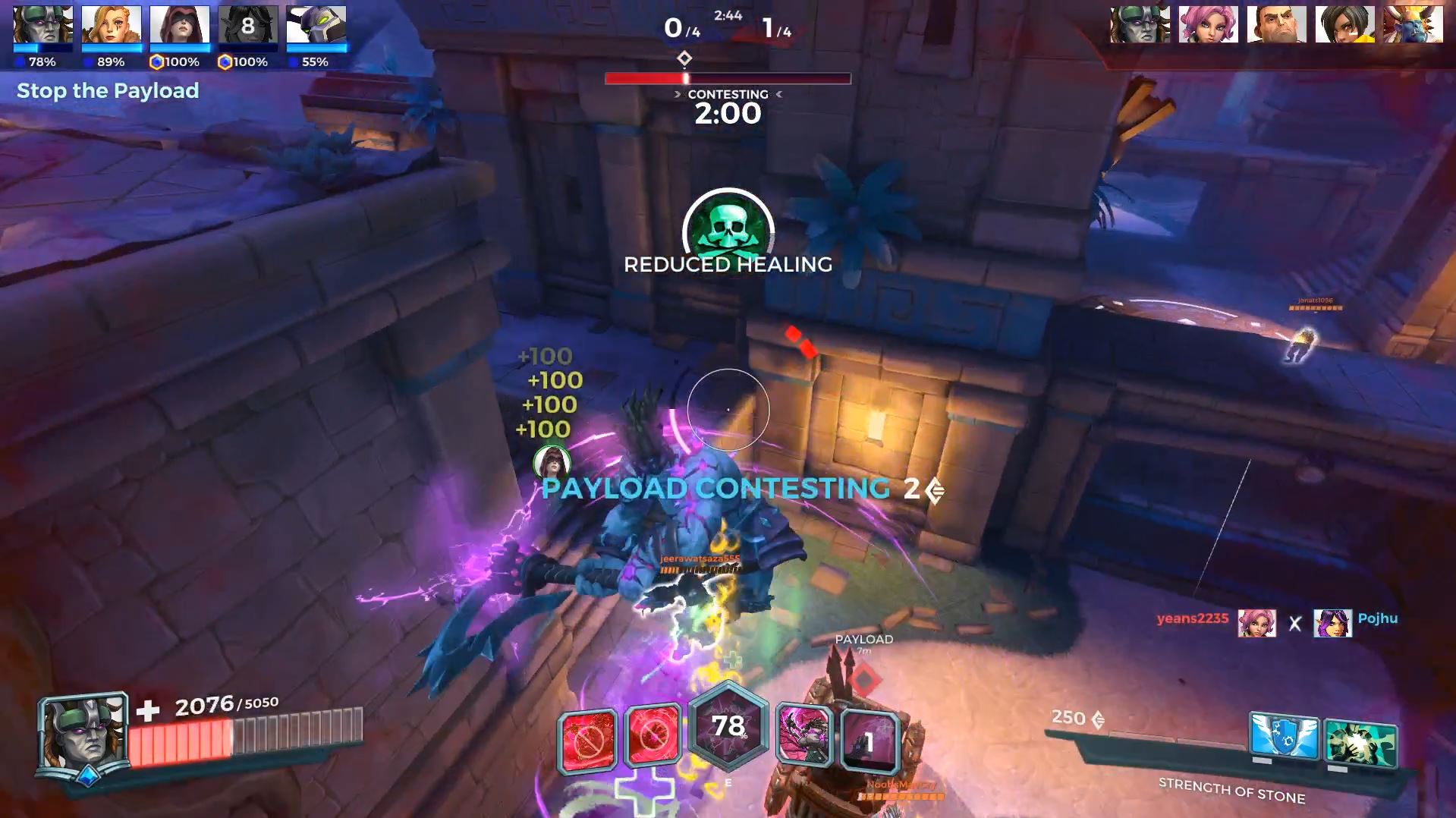 Here we have the elusive 'dunking undead stone sentinel'. Crikey!

As far as Items go, I don’t even really care about the Red Cards with him. He doesn’t need to Reload, he deals plenty of damage to Constructed Things (Turrets, etc), and his swing is pretty slow. Caut/Wrecker are okay for Red, but I prioritize them very very low. Ideally, I want Morale Boost (III), Either of the Blue Damage Reduction Cards (III), and Rejuvenate (III). If the game is still going, maybe a Red Card. But you really want his ult to be going off as often as possible. With his “Undying” card, Level 3 Blue Card, that’s over 50% damage reduction simply for being below 50% health. That’s going to be a lot of the time, by the by. But you can increase his healing through Absorb/Power Siphon and through other cards you can make him nice and sturdy. Those three items, those are my go-to. I can’t really see him using anything else, but admittedly, the Yellow Card for Ground Movement would be funny too. . . But I want to ult all the time. I want people to be afraid of whether or not their life is going to end to try and win a game. There aren’t too many things that are dangerous for Terminus, but admittedly he can be kited. As someone who has two very slow attacks (unless he has charges on his RMB), you aren’t going to be chasing people down unless you also burn your F (Shatterfall) and again, only if you know you’ll get the kill. But what exactly does his kit do?

Q: Power Siphon (Absorb, Special): Create a powerful funnel that absorbs enemy projectiles. For every 1200 damage absorbed you generate and store a Calamity Charge. You can have 4 Calamity Charges.  Incoming damage is absorbed this way and as long as it is directly hitting you, it is likely that you can absorb it. While you are Siphoning, you are slowed considerably.

F: Shatterfall (Area Damage, CC): Terminus gracefully leaps and spins his axe through the air. When he lands he viciously smashes it into the ground, dealing 500 damage and slowing enemies in front of you by 60% for 2 seconds. He can also dismount mid-air and do it for even more hangtime. Maximum height when leaping off of a building to dunk. It doesn’t do more damage, but it looks very cool. (14 sec cd)

Q: Reanimate (Ultimate, Area Damage, Resurrect):  This ultimate cannot be used while alive. When fully charged, you have a window to activate it while dead, before it sets you to respawn. After a 2.5 second charge, a huge explosion of necromantic damage shoots out in a wide area, dealing 4,000 damage to every enemy within it. It’s fairly easy to get out of, as there’s no slows or anything attached, but your team can keep them there. 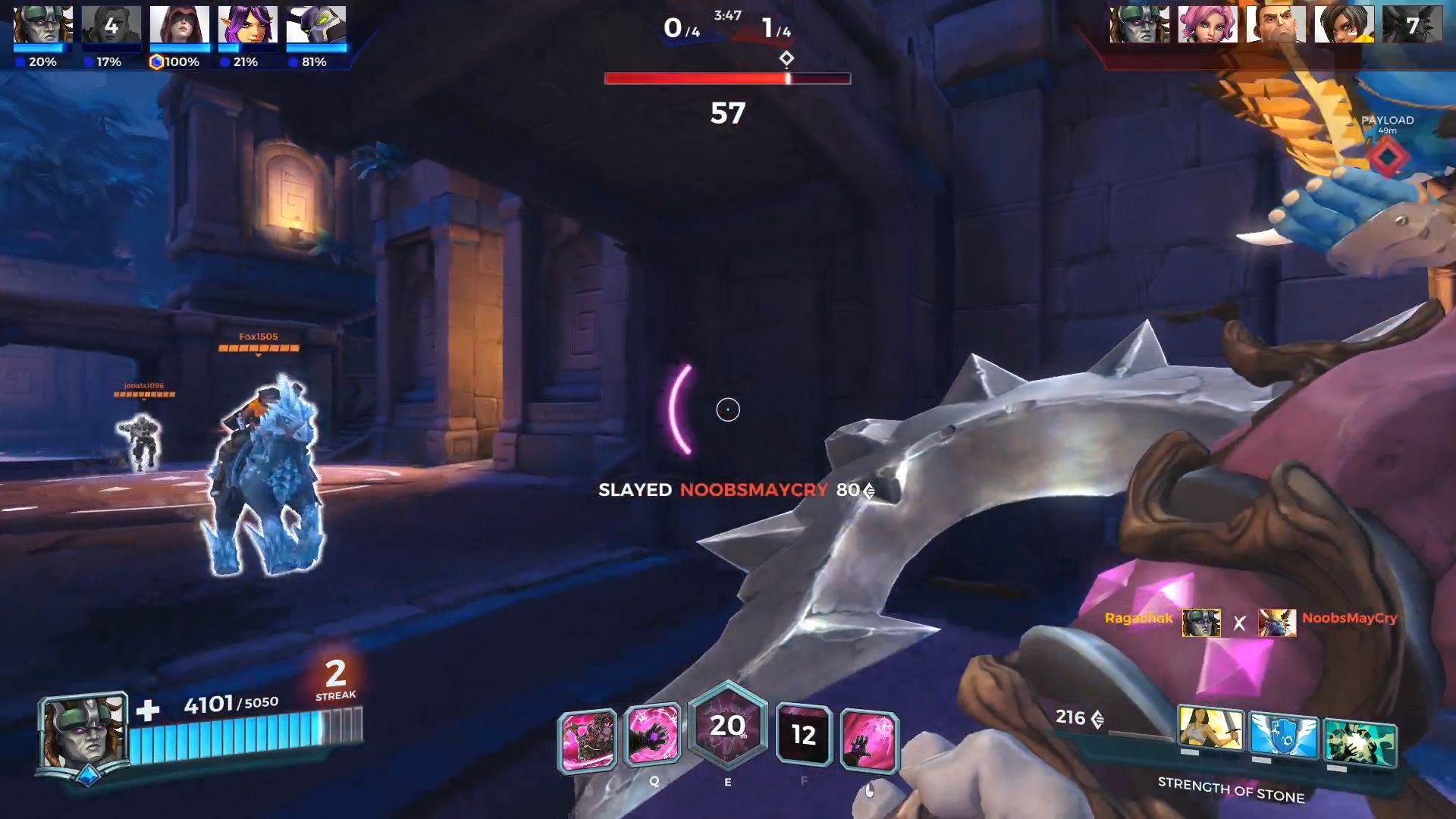 Whee! There goes Grohk, another victim of the Massacre Axe!

One of the serious drawbacks to Terminus is that he’s huge and slow. He’s a walking target, and he can’t just hide behind a stack of crates and avoid being hit, like Barik and Makoa. He can’t really get away from fights all that easy, so I have two builds that I really rely on right now. One is for when the enemy team has any measure of slow because I don’t want to have to endure any slowdown on-top of what he already has, simply for being a massive man. The base kit they give him is fine, Built around Armor/Power Siphon/Shatterfall, but it’s not what I really want to use. So below I’ll list my standard Terminus build, and my “Can’t stop me now” page. As far as his Legendary Cards go, I think the weakest is Decimation (Chare Blasts deal an addition 100 damage each). It’s good, but Crush changes Shatterfall into a 1-second stun (but no longer slows), and Undying (arguably the best) gives 35% damage reduction below 50% health. That’s the one I use the most. But if I have a shield tank or something with me, I might go Crush, just to keep people in place. Below I’ll list the card, rarity, and how many points on the card.

Basic Terminus: It Follows (Common, 3), Despoiler (Rare, 3), Powerslave (Uncommon, 2), Hulking Monstrosity (Common, 2), We Can Rebuild Him (Common, 2). Pretty standard stuff. More Health, more healing when under 50%, reducing the self-slow on Power Siphon’s handy, as is the heal on enemies hit with Shatterfall (but that’s risky, you gain no heal if you whiff), and being unable to be slowed below 80% is definitely nice.

Can’t Stop Me Now: Strength of Stone (Rare, 4), We Can Rebuild Him (Common, 4), Playing God (Common, 2), Powerslave (Uncommon, 1), It Follows (Common, 1). I don’t really feel the need to have more than a 60% slowdown protection because the other stuff is way more important. At least this way I hinder their attempts, just a little bit. It also reduces the self-slow by 15%, heals me for 10% during that Siphon, receiving 20% more healing when under 50, and the 24% (up to, depending on charges) will keep me relatively safe while at that low health I will likely hover around.

Terminus wants to be on the point at all times. He’s big and slow, which means he’s not an ideal flanking-tank. He’s not Fernando, Makoa, he’s going to be a sentinel, standing upon the point, daring their snipers and damage characters to waste their bullets on him. In fact, the more he siphons the better! However, a few things about that. Don’t just hit the Q key and let it go! Once the salvo of damage has gone, turn it off and let it recharge. At low-level gameplay, Terminus will just waste it, but that’s not what you want to do. You want to be a winner! Once I have 4 charges on it, I have to carefully consider what to do. Don’t fire if you aren’t 100% sure you’re gonna hit the target and kill them (or at least, set up a kill for someone else). Especially if you have damage reduction! Don’t throw away DR just for an attempted kill that you might not get. But if that Makoa hooked someone healthy and you want to make sure they die? Yes, there you go. As far as team comp goes, I want someone that can protect me while I’m protecting the point. So Makoa and Torvald are my preferred tank partners. Having a tank that can actually help other people is very nice, so I’d probably go Makoa over Torvald unless my team is self-sufficient. 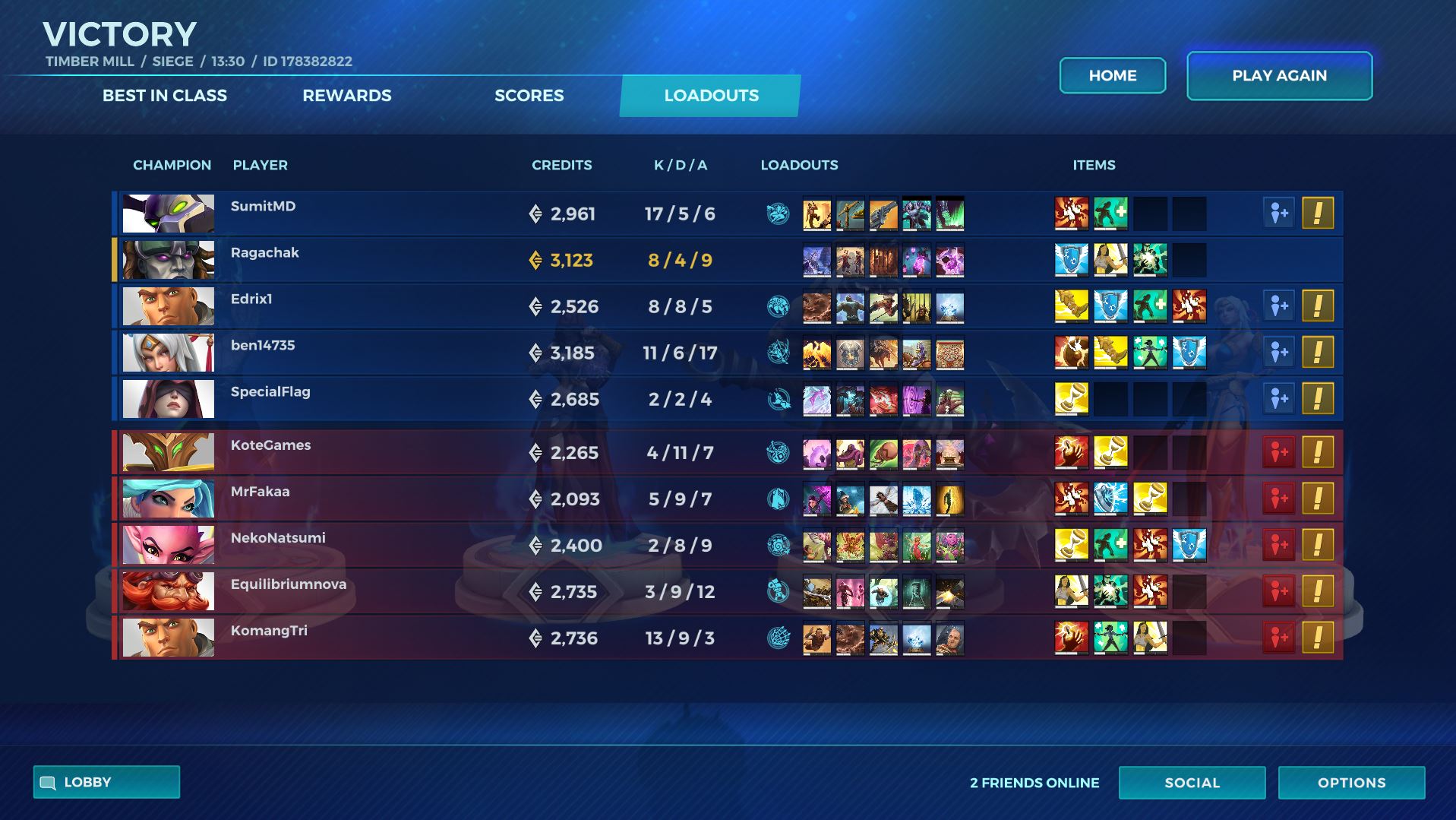 This is what a Terminus Main looks like. You may not like it, but this is peak performance.

Healers, I like direct healers more than I do AOE healers anyway. So Jenos and Seris are my favorites for Terminus, but there’s also a lot to be said for Grohk dropping his totem right on the point. Ying might not be so bad, considering how immobile Terminus is. But she’d have to be close enough to drop her clone “near” me so I don’t have to leave the point for him. Some final thoughts, though; I love Terminus. He’s an absolute blast to play. I was worried about having a melee tank in a game with so many ranged characters, but he has plenty of options and isn’t totally weak. I think he’s pretty damn powerful if I can be honest. I have a wombo combo that I want to try with him.  Having Seris ult their team into his ult could be a nice free pentakill, but would require some serious teamwork and coordination. And you have to die. Evie is great for keeping people in his ult, and Makoa can drag that one straggler back in. I don’t like snipers (in general), but I don’t think they fit on a team with him. Instead I’d rather have someone like Tyra, Viktor, anyone but a sniper. Terminus is a wall, and not even death can stop him. Personally, I hope he receives a skin akin to Akuma from Street Fighter, or Necalli. Necalli might be more interesting. Though he still has some bugs to work out. In the first week, I got snared into my own base by our team’s Grover, and there were a whole host of bugs with his ultimate. They still happen to this day, but not as often. If you activate his ult, there’s a chance he’ll continue to lay on the ground. You can still fight, and your leap is just a body being hurled ragdoll through the air, but it’s definitely weird. Harder to see what you can/can’t hit that way.

But that’s Terminus in a nutshell! If you have a character you’d like me to take a look at, feel free to let me know below!