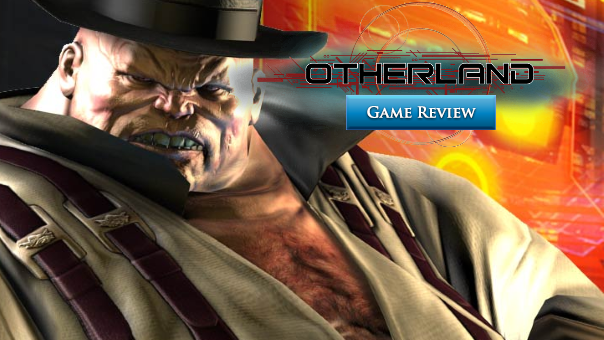 Otherland is an action MMORPG based on a series of novels with the same name. As you might imagine, coming from such a lore-rich background, the game has a large focus on storytelling. It also aims to turn elements from the novels into something playable in the game, such as various features like u|Space and u|Space hacking. Because it has an existing fanbase, there is a decent amount of hype surrounding the game, which has set expectations high. Today I’m here to help answer whether or not Otherland has managed to live up to the hype.

Customization, at least early on, is rather weak in Otherland. There is a fair number of options, sure. But in terms of the market of today, where customization is a huge focus in game development, the options are sparse in comparison. With most modern MMOs having customization options that completely out-do what you’ll find in Otherland, it’s hard to feel anything other than, “meh” with what you’re presented. Unfortunately, this was a recurring theme while I played Otherland.

This is, at least in my opinion, Otherland’s strongest point. The landscapes sculpted by the art team really do justice to the namesake. I’m usually one to not enjoy the representations of written work found in movies or games, but in Otherland you will see things that you would think impossible. You’ll even come across some experimental techniques that haven’t really been explored in an MMO setting, that provide a truly unique graphical experience. I’m going to be giving Otherland a 5/5 in graphics because they’re innovative and could honestly be considered artwork. Honestly, not many games have made me want to frame screenshots or purchase flatscreens to play a GIF on repeat to display how majestic and beautiful the game world is. Otherland has managed to make me seriously consider the possibilities of doing both.

Honestly, kind of clunky. This really becomes an issue once you get into melee combat. It felt boring, bland, and even felt hard to deal with at times. You should never feel like you’re having more difficulty with the controls than you are with your actual enemies. I’m hoping that this will improve a great deal soon, as I’m afraid that this alone will turn away a large portion of the potential playerbase of the game. 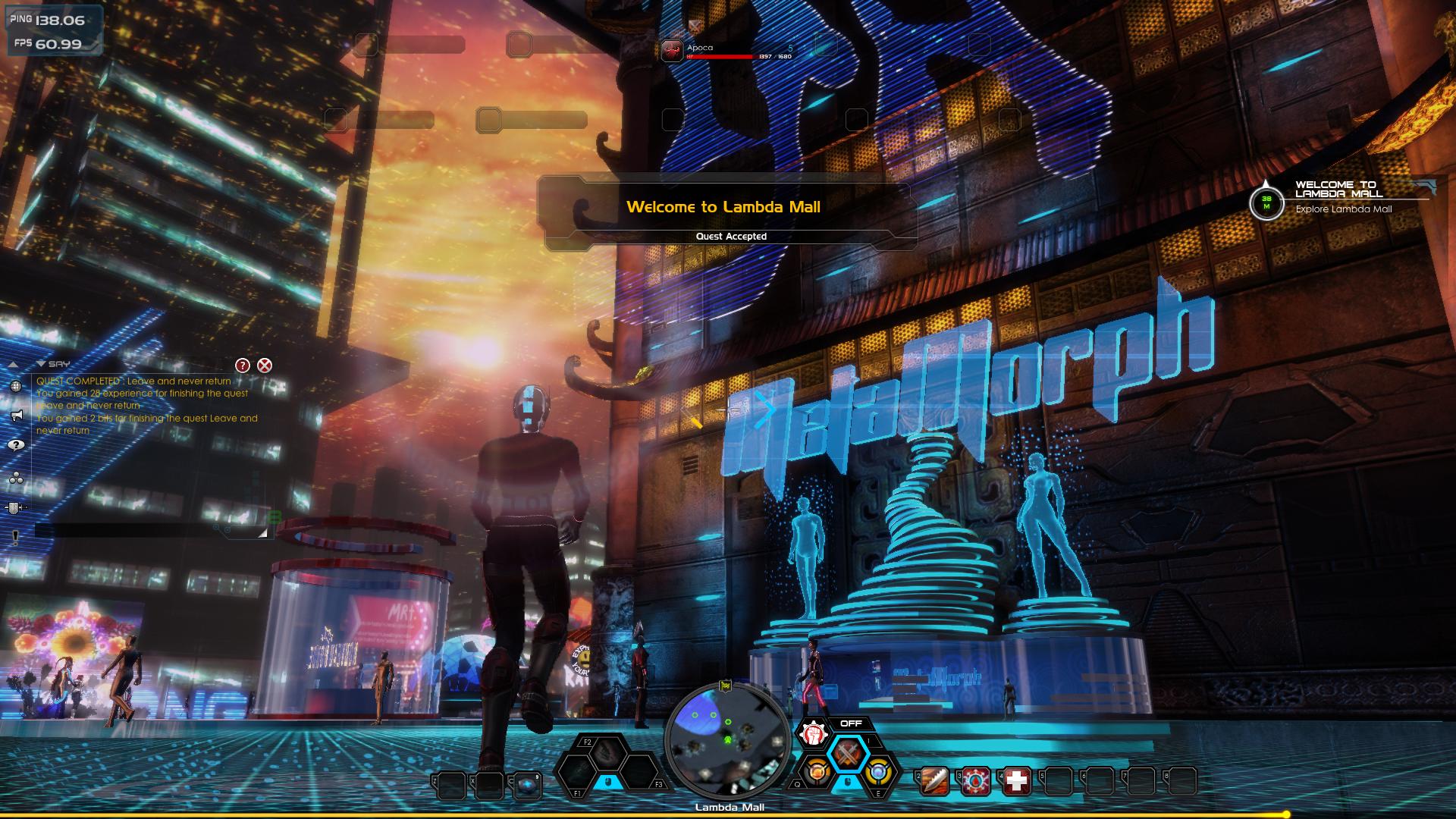 This is the strongest feature the game has; this screenshot simply does not do the game justice.

If you look at the reviews or comments of the game by players, you’ll see a large number that are dissatisfied and a smaller group that will admit the game has issues yet still give it a positive score. If you look closer, you’ll realize that almost all of the people who give the game a positive review are those that have already become invested in the series by being fans of the books. Not to say they’re biased, but I feel like this shows that the game is truly a labor of love and a gift for the fans of the series. I hope they can fix the issues so that those fans, and those that aren’t fans yet, can both enjoy the game.

Besides the graphics, the thing the game has going for it is the lore. Of course, this lore is derived from the Otherland novel series. The basic setting is that it is the near future and you are a ‘player’ logging into the virtual world. I know Otherland isn’t the most well-known series, and it’s getting on in the years, but a more recent novel that has a similar premise is Ready Player One by Ernest Cline. Essentially this is a virtual world with a central ‘hub’ and many different worlds that have different rules and laws. If you’re like me and you’ve been a big fan of these types of stories (my first taste of this being Epic by Conor Kostick) you’re probably going to want to stick through the horrible starting experience (which I get into more later on in the review).

Right now the game is fairly vanilla. If you’ve played similar techno-themed games, such as Matrix Online or Anarchy Online, you’ll get a very similar vibe from Otherland. About five years ago, the player and clan housing would have put this game in the “very innovative” group, but in the current climate of MMO development, those features are fairly standard. It’s gotten to a point where a game without player housing, or at least plans to add player housing, is considered incomplete. What all this adds up to is, Otherland seems to be just the same stuff we’ve been getting for years with a slightly different skin.

Not to say that skin isn’t beautiful. It is. I’ve already gushed over the graphics for the game and the Otherland novels are nothing to scoff at either. If you check out the history, you’ll find a strong fanbase and fantastic reviews of the series. Further, if you take the time to read them (which I am just now doing) you’ll find an immersive world that feels like it’s within the realm of possibility. The only other book that I can, at least from my own experience, relate it to would be Ready Player One by Ernest Cline.

The game, straight from the get-go, is a fairly standard quest grinder with a lean towards PVP in various forms. I feel like the developers really wanted to go with a much more sandbox approach for the game, but for whatever reason abandoned that in favor of a more quest-heavy experience. Not to say there aren’t some sandbox features; the way the u|Space and u|Clan player and clan housing works feels like it would be a great sandbox feature on paper. The problem is the stuff you have to wade through to get there. 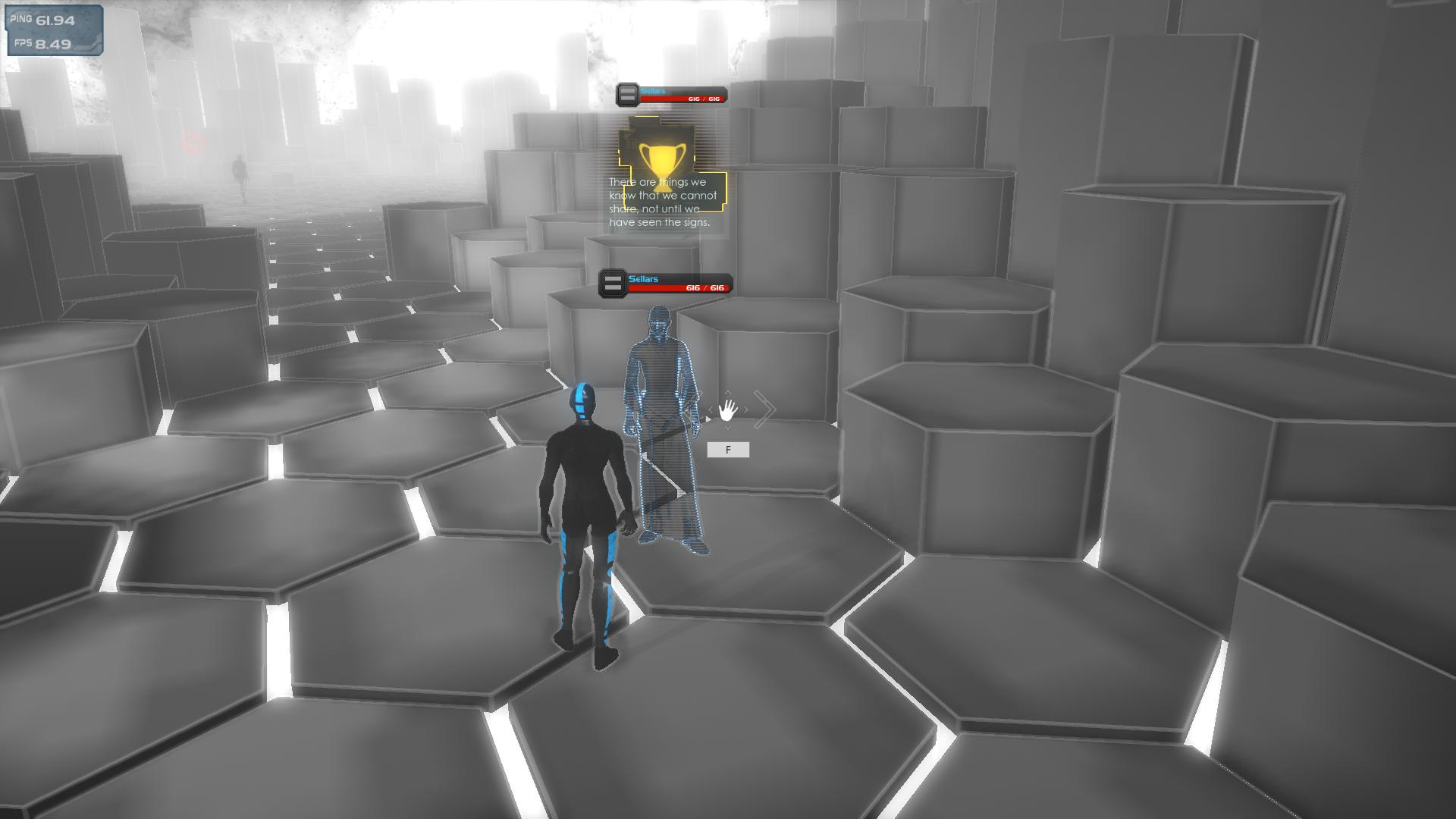 I feel like the Otherland developers should have taken a look at The Secret World.

Anyways, I probably spent two hours total in the starting quest line. This is a non-stop, no-voice acting, repetitive kill-quest infested, rage-inducing experience that almost made it impossible for me to continue playing. In all honestly, and I hate saying this, if it hadn’t been for the fact that I was playing the game to review it I would have stopped playing, uninstalled, and never took another look at the series. However, because it’s my job to play the game I stuck through it as much as I could. I convinced a friend who was a fan of Ready Player One and enjoyed the idea of various types of virtual worlds you could play in that Otherland presents, but he couldn’t play for more than thirty minutes before he did exactly what I described above. It’s a sad fact that this game needs A LOT of work, and I’m hoping the developers can manage to repair this before too many people try it out and decide the game isn’t worth a try.

Otherland has more than its fair share of issues. As it stands, I imagine that 99% of the people that try the game out will simply stop and pass the game over after they’ve spent less than an hour in the starting experience. The 1% that stays will be a mixture of hardcore fans of the series and a small population of people who have wills of steel and a very unique taste in MMORPGs. I’ve been railing on the games starting experience all throughout this review, but I’ve got to admit that it DOES get better. Unfortunately, many people will still quit before they get a chance to see it get better.

Features: 3/5 – Some neat features, like u|Space and u|Space invasion, but overall a generic MMO experience.

Customization: 3/5 – Just enough, but not much.

Graphics: 5/5 – One of the best looking games I’ve played.

Community: 4/5 – A strong core of hardcore fans of the novel series means that the game will probably always have a playerbase.

Overall: 3/5 – It’s a game that has a ton of potential, but poor execution. We can only hope the developers will continue to improve the game. It took Wurm Online almost a decade to get to a releasable state, and it was essentially alpha-state for much of its life. I feel like with enough love and care, Otherland would have the potential to follow the same path. The problem is whether or not it will be able to receive that love and care.