Recently, CyberStep hosted an alpha test that was solely focused on testing out the game’s party mode and latency issues. With only a few days to give the game a try, I jumped in on it from day one.

As I booted up the game for the first time, I instantly dealt with a huge problem: The current alpha client did not support full-screen mode, and the window was limited to a resolution of 1280 by 800. Certainly not a good deal for anyone that’s playing with a large monitor, so I had to narrow my eyes every now and then.

However, the music that was playing from the log-in menu was soothing and relaxing enough to make me forget all about the resolution problems that I was about to deal with. The music had this nostalgic feel to it, as it that reminded me of an old N64 game I used to play called “Legend of the Mystical Ninja,” which certainly fits the game’s theme a whole lot.

Upon logging in, there was a fair amount of options to choose from with initial character creation. Players have a choice between different body types, faces, hair and clothing sets. For starters, I decided to go with an energetic young boy who had a smirk on face and fire in his heart, just ready to take on the world… 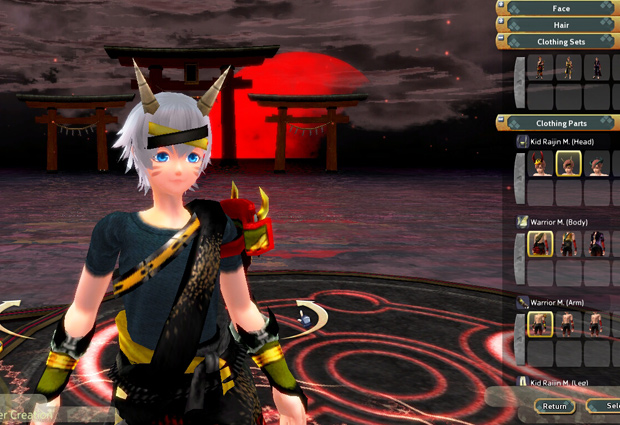 And upon stepping into that world for the first time, I was almost immediately turned off by the visuals. There’s no other way of putting this, but Onigiri is a game that seems to be incredibly dated in every sense of the word: The environments were simplistic, the textures were weak, and the polygon count was overall low.

Still, I decided to disregard the poor visual quality, as I knew that Cyberstep was a company that liked to focus on gameplay over graphics. You know what they say: It doesn’t matter if you have the looks, as long as you got the moves, right? 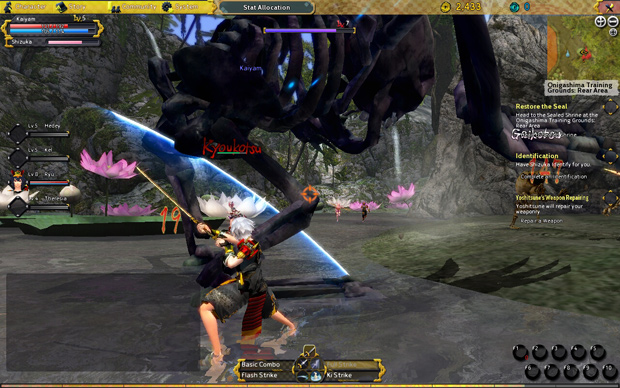 Well the game certainly had some decent moves to pull off. Upon trying out the combat for the first time, it seemed to play out like a mix between Phantasy Star Online and Phantasy Star Universe, as players will have to aim their attacks with a crosshair and attack using the left mouse button. The right mouse button activates one of three different skills that are tied to your current weapon, which range from special combo attacks, dodging attacking, support abilities and more. Players can move using the WSAD keys and also dodge attacks by double tapping any movement key. Dodging and performing skills are all tied to your character’s MP gauge, so you’ll have to use both with care, or you’ll find yourself deader than a doornail, since dodges have zero invincibility frames.

While I would usually like the idea that dodging attacks have no invincibility frames, it ends up reinforcing one of the game’s biggest problems during the alpha, which was the game’s overall challenge. 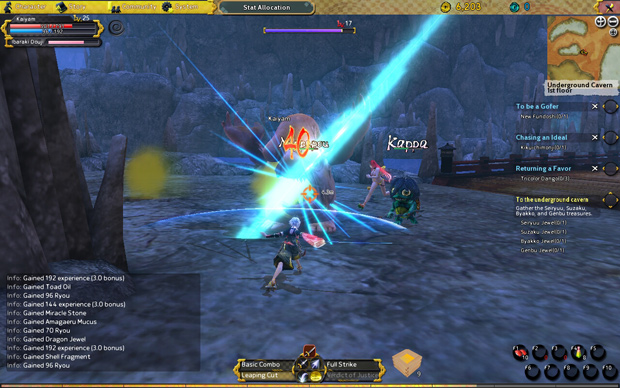 Have you ever heard of the term: “Artificial Difficulty”? Well that term applies to Onigiri in a big way. All the monsters in the game, including trash mobs that players will encounter in the very first dungeon, can all do unreasonable amounts of damage that can take players out in four hits or less. With the ridiculous amount of damage that monsters can do, I was suspecting it was a way to force players to group up. Sadly, I was dead wrong, as enemy HP and spawns actually INCREASE depending on the number of members in your party.

This is a poor way to make your game challenging, because it’s not really a challenge, it’s just straight up tedious. It forces the player to be overly cautious with every move they make, dragging out battles much longer than they should. It also doesn’t help that the game suffers from horrendous lag issues, which affect the game’s already shoddy hit and dodge detection. Even if you dodge perfectly or attack swiftly, there’s at least a one second delay between having those commands registered, also making battles against enemies more frustrating than they should be.

Moving past the game’s problems, however, there is a nice amount of customization for players to partake in, including the game’s stat system where players are free to disturb their stats in any way they want, which not a lot of MMORPGs seem to allow these days. The ability to use any weapon type you want is another huge plus. However, there are different kinds of stat classes available such as Power, Cautious and Daring, which allow players to specialize themselves to work best with certain weapons. These stat classes determine the different kinds of stat bonuses you’ll get when leveling up, but it’s still fairly flexible for players to come up with their own hybrid builds. 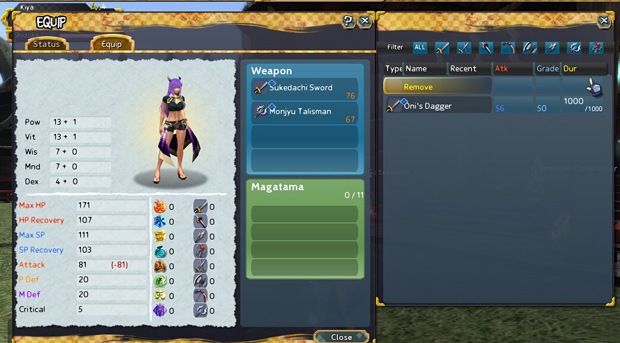 The biggest feature that Onigiri has to offer is the game’s story and partner system. Along your adventures in Onigiri, you’ll be meeting up with a crazy cast of characters that specialize in a multitude of different skills and abilities. 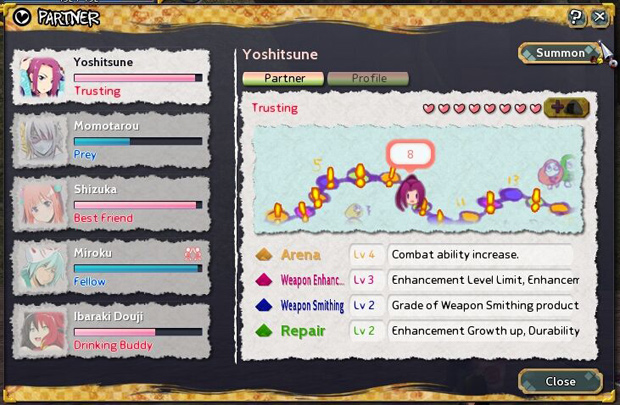 The characters include the charming princess Shizuka who can identify and store weapons for you, the free spirited Miroku who can sell many different items to help you on your quest, and my personal favorite: The big breasted cat girl named Ibaraki who enjoys making and selling different drinks, along with having “other” functions… 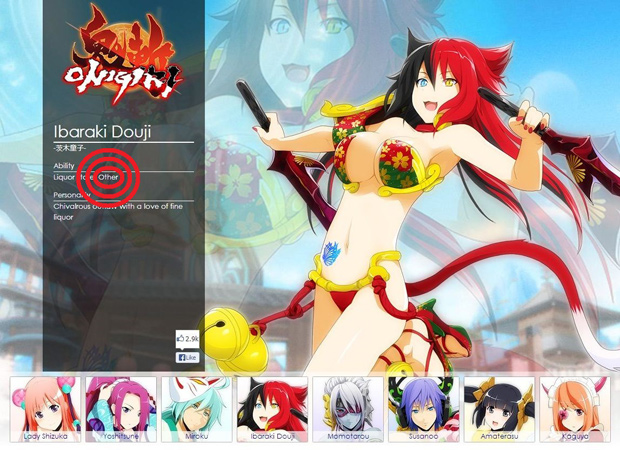 Anyone want to take a guess what that “Other” ability is? I kind of have an idea of what it could be… 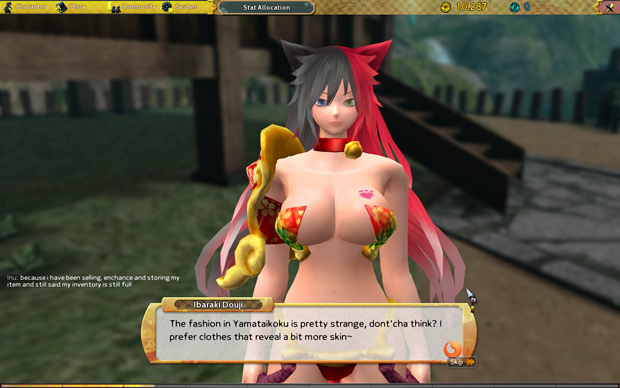 Besides from her perky personality and a love for revealing clothing, her brewing ability comes in handy when you need a quick buff or health restore in battle. They come in many different varieties and can be chugged up to 10 times in battle, but drinking too much may end up making the player drunk, so drink responsibly, folks.

The most unique feature with partners is that they can tag along with you in battle. Each player can bring their own partner which effectively doubles the size of a party, and they all specialize in different weapon types so it’s important to have the right partner summoned for whatever situation arises, such as using Momotarou and his dual blades to keep single enemies locked and stunned, or Miroku’s pole arm for crowd control. 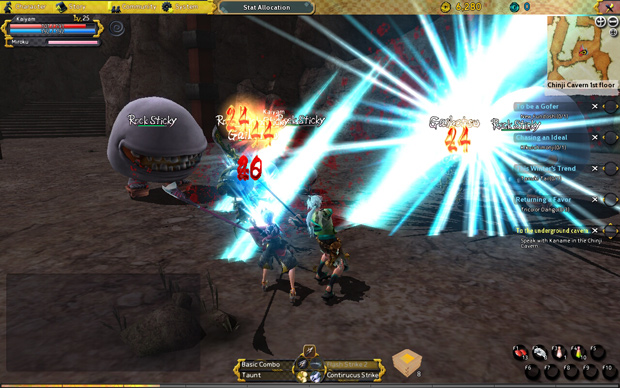 It’s just too bad that partner AI can be very idiotic at times, with partners running into walls, running around aimlessly in circles or attacking invisible enemies at times, until you un-summon and re-summon them into battle.

Overall, my experience with Onigiri proved to be an enjoyable one, despite its issues and unavailable features, mainly because of the sense of nostalgia it brings, while retaining the throwback feel of several classic online RPGs. While I didn’t pay too much attention to the main story at hand, the partners that players will pick up are interesting and add some much needed charm to the world. It could end up having a cult following if they can just include better visual features, fix the latency issues and perhaps tone down the artificial difficulty, but I’m sure the game’s anime flair will be more than enough… 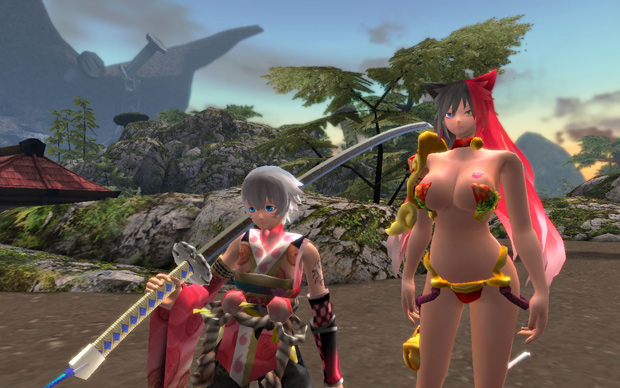 You know it’s a game from Japan when it has big swords and even bigger boobs.