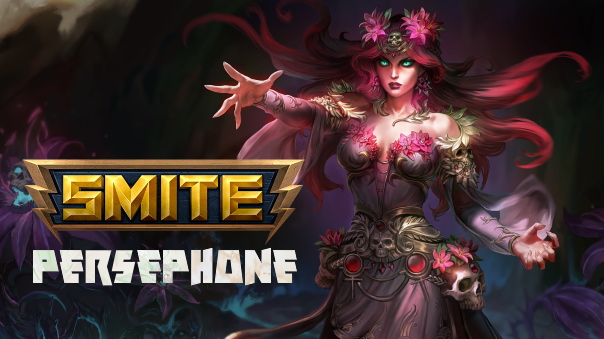 I’ve asked for a few years now, “If we have Hades, why not Persephone?” Even for a Greek God, she has such an interesting backstory. When I realized she was on the way, I hoped and prayed for another Guardian. Come on, you know my schtick by now. The role fits for such a loving, protecting goddess, especially the goddess of the Harvest – honest! Well, I was close, because she is a Magic-user. The Greek Pantheon receives yet another Mage, and I wither away a little inside. She’s a blast to play though, and her kit is definitely unique. Boy, can she do a lot! Her leap passes through walls, she can heal herself, and she has horrifying range. Her ultimate is a beautiful root/aoe that even works if you blast a wall with it. Despite her role, I enjoy playing Persephone; it’s pretty rare I have fun with a Mage. She feels like she has a lot of possibility as a utility god, forcing people to play her (and her team’s) game.

Persephone, daughter of Zeus and Demeter, is proof that once again, Greek mythology’s problems stem from Zeus. Zeus gave Persephone away to Hades for a wife, and she got recalled to the surface. Before she left, Hades offered her a Pomegranate, grown in the underworld. She accepted, knowing that food from the underworld would bind a person to that plane. Every six months, Persephone leaves the underworld to soothe the grief of her mother. Her arrival back in the land of the living would herald Spring. But in SMITE, she has seen the struggle of gods and men, and she will ease the suffering of mortals. Persephone is going to take the throne she deserves.

Passive: Pomegranate Seeds (Special): Persephone gains Pomegranate Seeds when her plants wither. Should she have more than 25 seeds, she can use them to resist death. Upon dying, she will continue to do battle for 8s, but deals 50% reduced damage. Any additional seeds are sold when she gets to the fountain, for 3 gold a seed (max of 100 can be held).

1st Ability: Bone Rush (Damage, Line): Persephone summons a skeletal warrior who charges forward for a set length, or until it hits a god. The skeleton topples and sends bones flying forward, doing damage to enemies in its path. The skull then becomes a Harvest Skull when it lands. Damage: 100/150/200/250/300 + 80% of Magical power. Cooldown: 12s

3rd Ability: Flourish (Leap, Special): Persephone floods the ground with life-giving energy, and then leaps forward/backward, depending on the direction she’s moving. Harvest plants in this area immediately activate and shift to their next phase. After using this ability, the next Harvest cast is pre-germinated and becomes a Sprout immediately. Cooldown: 15/14/13/12/11s

4th Ability: Grasp of Death (Line, AOE, CC): A skull wrapped in vines is launched forward from Persephone’s hands, and the first enemy god or wall it touches causes it to explode. Gods within the mass of vines are crippled, rooted, and have reduced attack speed. Vines then spawn from the target, and any enemy gods they catch are bound, crippled, and will prevent them from fleeing. Enemy Vines are destroyed if hit by 5 Basic Attacks, which will end all of these effects. Damage: 195/270/345/420/495+75% of Magical Power. Vine Damage: 65/90/115/140/165+30% of Magical Power. Attack Speed Reduction: 20/22.5/27.5/30% Cooldown: 90s

Persephone succeeds when she can be mobile and keep her plants spawning. Her 3 (Flourish) is great to turn plants into their next phase, but only if she’s standing near them. This makes things challenging because it’s also a great leap to get into position. If you use it to escape, you aren’t going to have it to prep your Harvest Skulls. If you were already on top of them to start with, then it will work out. There’s no real cooldown on those seeds (2nd Ability), and you can have ten of them up at once. To start a game of Conquest, I’d drop a few down at Speed Buff, then rush back to mid. Drop a few seeds here, then go help with the Yellow Buff camp. This should let you obliterate both things with ease, and help the team out. If you’re roaming, drop a couple on Harpies, Buffs, or wherever you think the team is going to need them.

Persephone’s burst damage is outrageous and only gets more dangerous when enemies can’t get out of the way. A heavy CC team is ideal, but don’t be afraid to have a second mage on the team with her. While gathering footage, Trunath and myself ran Persephone + Kukulkan. When I rooted enemies down, his ult would come screaming in like a comet. Her ultimate can bait out beads, so other gods (Da Ji, Ares, Hercules, Discordia, et cetera) can nail their CCs instead. Her 1 (Bone Rush) is one of her primary pokes, but it’s a very awkward one, with a pretty high cooldown (12s). The animation has a brief delay before it fires, so spend a little time with it. It also drops a Skull, so you can move in, pop her 3 to escape, and get some extra damage after a little time has passed. Persephone is fragile, so be careful.

Her seeds/plants are unique, and easy to see, which I’m grateful for. Those seedlings/plants make her reach that much farther, raising her threat level. Persephone can drop her seeds and back off since the plants have no health and cannot die. If they could, she would be completely useless in matches, so I’m glad this is the case. The seeds do create a ton of clutter in modes like Arena.It’s not always clear to me which seeds were mine and which were not at a glance. If you aren’t keeping seeds around you or in locations near you at all times, you’re at a disadvantage. A great deal of her non-ultimate damage comes from setting people up in her minefields. Sure, the 1 does good damage, but that’s the only real damage she has outside of plants and her ultimate. It is with this in mind, that Persephone should always be in Auto-Cast. Being able to aim, drop plants, and shoot skeletons makes her feel more reliable. It will likely take practice to get the seeds to fall exactly where you want them to. The benefit will be immediately clear though: No pressing the button, aiming around, and clicking to get your shot fired. This will increase the overall time you have to poke and punish. Persephone is a lot of fun, but in a mirror match, the clutter can be a trifle overwhelming. She can feel hard to deal with, but bring people that can go all-in on her and dive through her minefield. She’ll wilt faster than you might imagine.
Itemization:

CDR, CDR, CDR. You want anything you can cast faster with, to be frank. I don’t like to build Spear of Desolation often, because it’s so damn expensive, but on Persephone, I make an exception. I tend to pick up far more assists than kills, so that had my cooldowns ticking down. But there are items that will help her burst, using both damage phases of her 2: Soul Gem and Soul Reaver. She has plenty of options for items, but there are a few that stand out the most to me. Chronos’ Pendant is a fantastic early CDR/Damage item. Pair this with Spear of the Magus to reduce Magic Resistance of your targets. If you need a little protection against other mages, pair Spear with Void Stone. This is a nice double-dose of Magical Damage and Protection Shred. Soul Reaver and Soul Gem are both dandy, but I tend to lean towards being defensive and likely wouldn’t pick up both. Mages that are more bold or skilled may grab both, as well as an Ethereal Staff for a little extra oomph.

I like the idea of Lotus Crown on Persephone too, so you gain protections when healed. This is amazing because you can heal almost anytime you want. Void Stone is, again, a great defensive option, but that’s about it for defenses on a Mage. I also lean towards Breastplate of Valor, if I need more CDR or am getting ganked by physical gods. Well, Bancroft’s Talon could be considered a defensive and offensive option for Persephone. As a Mage, I often find myself low on HP, and the Magical Power/Lifesteal you receive from this item is incredible. Even 20% lifesteal is nothing to sneeze at, with the kind of damage she can crank out.

Persephone can, in fact, do a great deal. Sure, she’s got a heal, but so does Ra! She’s not the first mage who can heal herself. I’m grateful it doesn’t heal other players too. Her ability to churn out plenty of poke/damage is balanced by how easy it is to get in on her and demolish her. She doesn’t have a ton of combos to memorize, but you will likely want to 3 into 2, to try and get the most out of Flourish. It’s also important to note that while her ultimate is pretty powerful, the vines won’t grasp onto players it can’t see. If you’re behind a wall? You’re safe. Persephone will be best used by people able to think ahead. She is very confusing at first, and the horde of seeds you can drop can be distracting. I often find myself losing track of what I’m doing with them, but despite that, I still think she’s a lot of fun. She’s going to make heavy CC comps a bigger nightmare, that’s for sure. I asked myself if she’ll see SPL play, and I think so. I have a feeling she may see some bans. Not a 100% pick-or-ban, but she fits into many comps. Persephone only has one or two real CC options, but they’re potent. Persephone’s going to make a huge impact on the Battleground of the Gods, and the seeds she sows will disrupt any field she tends.