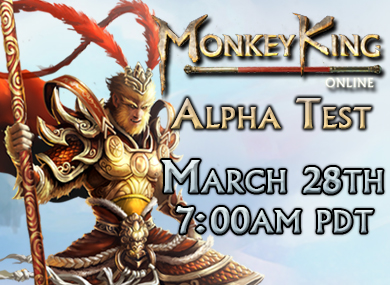 R2Games announced today that the four-week Alpha test for their upcoming MMORPG, Monkey King Online, will begin on Friday, March 28 at 7:00 AM PDT. R2Games invites players from across the world to get an early look at this unique, action-packed browser title.

The Monkey King Online Alpha will last just over four weeks, and is scheduled to conclude on April 14. Players will be able to preview a wide variety of quests, events and PvP challenges during the Alpha, though all character data will be wiped.

Monkey King Online is a free-to-play browser MMORPG inspired by the Chinese epic Journey to the West. Players choose one of four ancient heroes, including the rebellious Monkey King himself, and embark on a quest to bring peace to a broken world. Real-time combat is enhanced by the Immortals, giving players the ability to change shape during battle. Monkey King Online can be enjoyed solo, but features a host of robust multiplayer modes, including team dungeons, PvP combat, competitive Arena play, and territorial Guild versus Guild battles.

The Monkey King Online Alpha will be available exclusively at http://monkeyking.r2games.com.