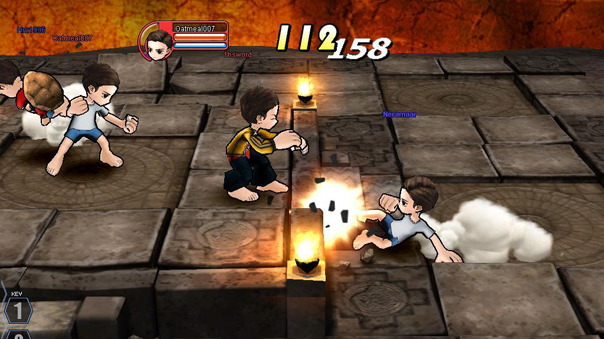 Have you ever wondered how a battle between an archer, Indiana Jones, a ninja, a pirate, Star Wars’ Storm Troopers, a fireball wielding mage, and a world champion boxer all at an abandoned construction site would turn out? WeMade Entertainment’s Lost Saga is your chance to do exactly that! This player versus player centric 3d brawler is rather unique due to the sheer number of different heroes you can play. Although it ends up rather complex, the number of actual keys you use is quite small. You have very minimal use of the mouse, usually only getting you into a room to brawl, and then arrow keys, A, S, and D are your only keys you need to fight with your hero. In one room, up to 16 players can play against each other at once.

I must say that I was impressed with the expansive amount of different genres that encompassed the ranks of Lost Saga. It has everything from Paladins and Mages from high fantasy, to Infantry Men and Quarterbacks from a modern setting, to even a Cyber medic and a Storm Trooper from Sci-Fi genre, and even Pirates, Ninjas, and Treasure Hunters. Each has their own special abilities, tactics, and combos that they can utilize to make diverse characters while still only utilizing the same 3 buttons and movement keys. They do have a “training area” that you can try out new heroes and get to know each character with a tutorial. 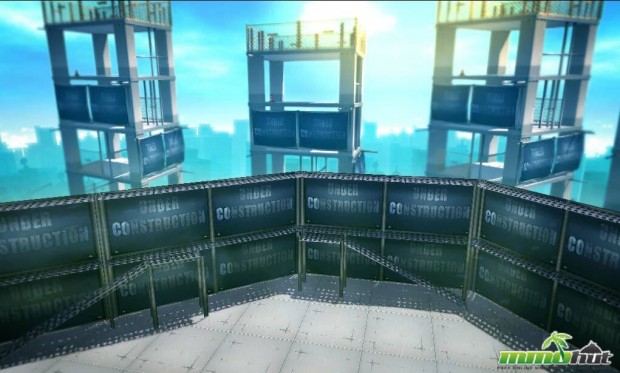 Each character can be unlocked for a certain amount of time, only 2 and 10 hours in game are for free unless you happen to be rather lucky with the random chance to get one permanent which is usually only reserved for those who use the micro transactions. There are small usually rather easy quests you can do to unlock heroes or get a bit of extra cash. Sadly, you have an overall rank that dictates which characters you can purchase on your own, unlocking a new character each rank that is furthered so you get rather familiar with the first ones quickly as it starts to drag how long it takes to advance in rank. However, if you are good at luck, the same chance of getting a character can give you various amount of time on a character that you do not have access to due to your rank, though typically only for 2 hours and it’s a random draw on which one you get.

On top of having an overall rank that dictates your purchasable characters, each hero has their own level. When your character levels up, you can spend 2 points, 1 point to lower the cool down of a special power or 2 points to raise your attack, defense, movement speed, or reduce the amount of damage you take while falling. It takes a certain amount of time even after selecting what you raise for the upgrade to take place. This adds some customization to your characters so not every pirate is the same as another one. 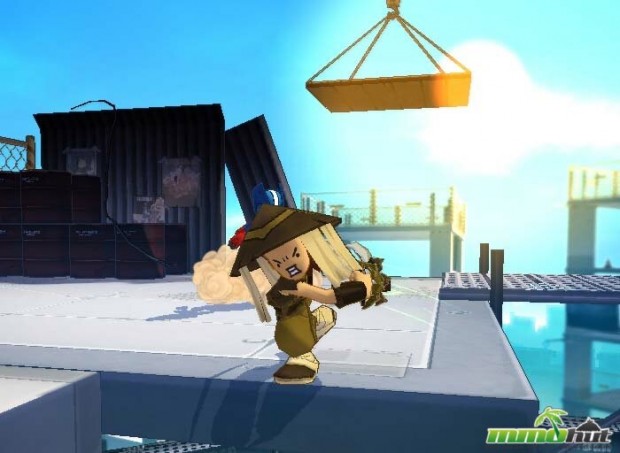 Yoink! Your Hat Looks So Good on Me!

One interesting mechanic that Lost Saga has going for it is that the 4 abilities are linked to their equipment: Weapon, Armor, Headgear, and Accessory. If your Treasure Hunter is in a battle and deals significant damage to his Quarterback, your opponent slowly loses his equipment which you can pick up to gain his abilities. This means you can have your Lancer have a Ninja Mask in a football uniform and have a jetpack just in case. It gets more intriguing because either through quest rewards or the in game currency or micro transaction stores (though it seems somewhat expensive) you can equip your Cybermedic with a Fire Mage’s hat and teleport without needing to go against a Fire Mage and have him drop his hat. 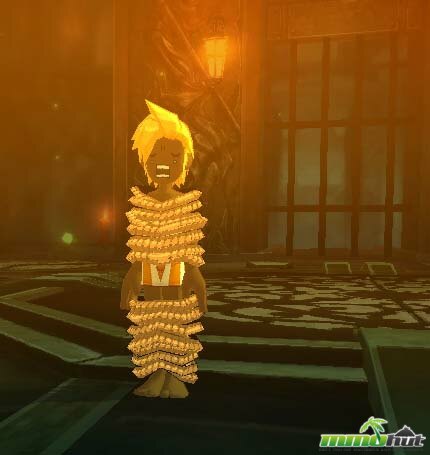 Lost Saga started off with very few gaming modes to offer when it was launched; however, that has since expanded to a decent array of different modes that have since been added. Modes like one player becoming the “Boss” and all the other characters must fight together to defeat him, and once the Boss is defeated, the highest contributor in defeating the last boss becomes the new one and this continues until a timer runs out. Other modes include a one on one fighting area where spectators can bet on who’s going to win the battle, a destroy the other team’s object where attacking your own object heals it, keep possession of a crown for as long as you can and the first team to keep it on for a certain period wins. 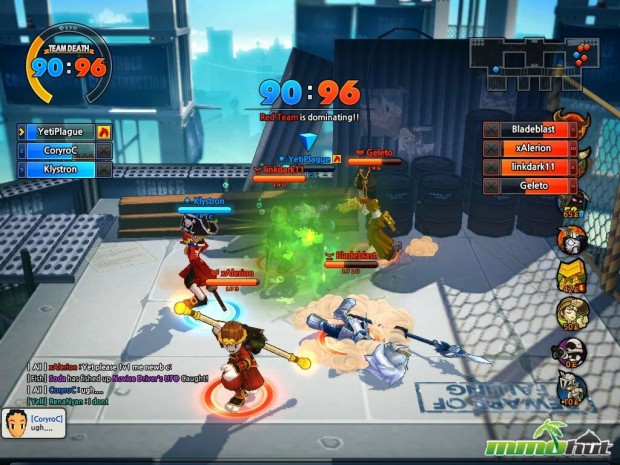 Naturally, they have very classic modes like one for all and regular team battles where the players attempt to reach a score of 100, but the amount of players on the opposing team dictates how much each kill is worth, the more players on a team the lower each scores. They also have an optional rule that I enjoyed, switch up teams. Every time you start a new round, your teams get switched up so you are never going against the same people twice. Your ally this round could be your opponent in the following round. It kept things fun for me because one team might dominate this round, but with the teams constantly switching, the next round was nearly a clean slate for both sides.

A note that Lost Saga is about 95% pvp oriented, but there is a cooperative opportunity and a bit of social opportunities offered as well in the game. They have one cooperative mode, Crusader Mode, which pits players versus skeleton versions of the various heroes. Once the players have climbed 20 stories and defeated a major boss, they complete the mode. There are three different difficulties that correspond to how many players can be on the team. 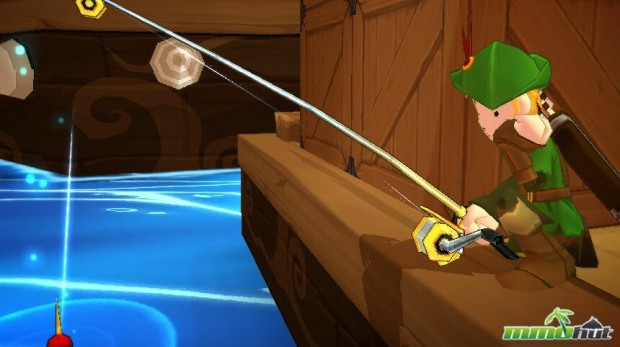 They also have some two social modes that can be used to gain some extra money without jumping into combat. These two are fishing (which is rather passive) and relic hunting where you take something akin to a metal detector and scan for objects that can be sold for cash. These both are passive enough that one can easily hold conversations and be social; however, the pvp focused nature of the game does not allow for much socialization in my experience. Any conversations in the pvp ends up being people complaining about various players spamming or teams being uneven and people loling at opponents falling off the side of the map.

The only two major issues I had with Lost Saga was the lack of social ties with the community and locking out heroes when it takes so long for them to be able to unlock them. The amount of heroes available and the amount of different modes that you can use your heroes with were outstanding. There’s a pvp mode for everyone, and being someone who generally dislikes pvp in pve centric games, I found a few modes that were enjoyable. I believe the main thing that made me enjoy it as someone who generally stays away from pvp is all the different modes it has. Some people enjoy the very basic team versus team bash, which was sometimes fun, but can get old rather fast. With all the different modes, if I wanted more of a cooperative day, I could play Boss mode or Crusade. If I feel confident about my abilities, Champion mode is there for me. If every game had as much selection of various pvp options, I would probably enjoy them more; however, this is a page that pve games should take a look into incorporating into their games to expand their pvp side.