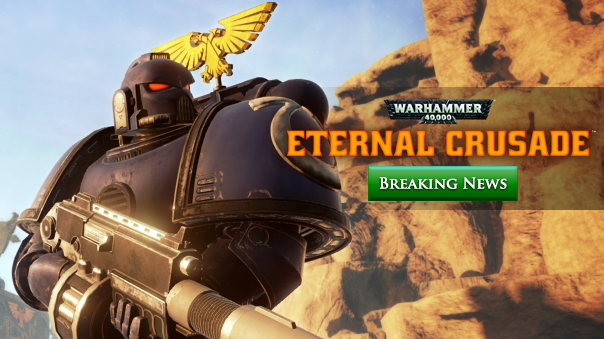 As a huge Warhammer Fan, thank you guys so much for taking the time to listen to my questions and concerns. So, here we go!

It was always a question of when we should open up for a way to play Eternal Crusade free, not if. The old “Free to Waaagh” was a concept which fit at the time, so when we thought that now was the time to honestly, get more targets, we redesigned it to fit current circumstances.

If anything we wanted to do it sooner as everything we built to support a free way to play the game. Playing for free also ties into our future roadmap and how our game architecture is; everything relies on more players creating a greater experience. Often more players can have detrimental effects on game systems.

That means that you become a paying player the minute you have spent more than $20 in the game, usually through the ingame store. Simple as that. The $20 version is just the 20,000 Rogue Trader Credit pack – our virtual currency.

The restrictions we have in place are part of the overall balance of the game now, while previously it was only one class of one faction. Now you can play all factions and all but one class is limited, as well as some advanced situations, veterans, elites, and heroes. Only one faction or one class would have caused serious imbalance.

We thought that was pretty nifty instead of hard paywalls all over. You play and pretty much get everything you missed out on when playing for free when you reach the $20 mark.

The larger versions are more bundles of Rogue Trader Currency and items you can buy for money at a discount. As we inherently do not want a pay to win game, the benefit of buying a bigger than $20 package simply discounts. There might be unique weapons only available there or contain one unique item, but still follow our philosophy. You get a discount off the stuff you do not necessarily need to play the game. We know this sounds weird, but when the ingame store isn’t paying to win, it automatically becomes a great deal, rather than an advantage. You’ll look pretty fly, though.

Yes, everything which is not inherently an advanced class or similar is all part of the game. We don’t believe in segmenting the playerbase, you’re there to play with friends – whether you’re a free player or not – and our free updates and expansions are part of that philosophy. Even in some cases, advanced classes or a version thereof won’t be limited.

It’s all the same battlefield for us and all players, whether it’s a new map, new feature, or new game mode.

Hey, we love that idea as well, which is why we’re pretty damn excited about finally opening the world to the gates of hell – or heaven, depending on which is your god of choice in the universe :)

Crossplay is the key for us with consoles, which is why we’re focusing our players on one platform till we can combine them. Today, you can do crossplay with PC and either of the consoles, so if our roadmap and model work well, we can start assigning back people to a new platform that we can link up.

We already work with a controller in the PC version, and that’s key to the console development remaining a part of the gameplay. That and crossplay. We already had console clients ready for submission but decided to wait and focus on one platform first.

As they say, there is only war, so we’ll be expanding on our regular pace. There isn’t anything tied directly to the switch; we just keep extending the game with new items, both cosmetic and weapons, to the store and free in the game; elites are around the corner as is our new 40 vs. 40 Ronan Fortress.

Why thank you! We pour our blood into it and aren’t happy yet! When I arrived, we switched to Unreal Engine 4 to be able to achieve some of the simplest of our goals. It took us about three months to rewrite the core game in it and port most of the art assets. So judging by that velocity and amount of people, you can imagine what happened in the following months. The last two factions, all the weapons and vehicles, new game modes, more maps, the entirety of PVE, visual customization, the advancement tree, and character persistence.

We think we’re at the point where the focus is more on the parts of the game we wanted in back in the day, instead of various technical and gameplay challenges.

Hahahaha, getting into the factional wars of the development team is never a good idea :)

I’m a Blood Angel myself, the red colors, the gold and the rage fit me quite well. Eldar, Orks and Chaos are all well-presented so the idea that there is one favoritism by the entire team, every patch, is quite amusing. Everybody loves to tell me how we nerfed their faction. So I guess I’ve been nerfing factions for two years now!