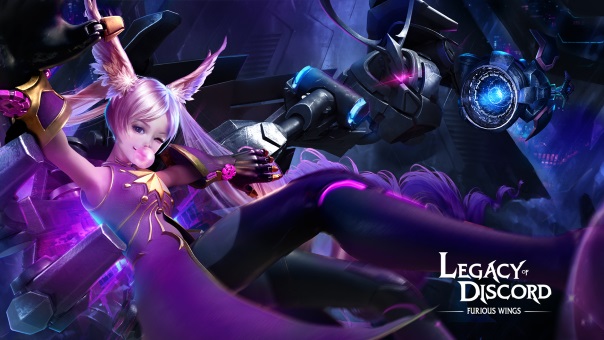 Coming on June 22nd to Legacy of Discord: Furious Wings, the new “Puppet Master” class, where you transform into a powerful Mecha with an entirely new set of skills. Any player that enters the game and completes the conditions will unlock the class (Spend 5000 Diamonds, Reach Level 62 and participate in Treasure Raider mode at least six times) and has some exclusive skills.  Her basic attack, Mecha Assault, attacks enemies with a mechanical fist. Her Skill 1 is Kinetic Ram, making her divert all power to boosters and ram into enemies with a burst of kinetic energy to deal heavy damage. Skill 2, Photon Barrage, fires a barrage of photon beams at enemies, each one inflicting burn damage. Skill 3, Solar Pillar, calls down a massive pillar of solar energy to scorch the ground. The ultimate skill is Obliterate, which means the Puppet Master overloads the energy reserves and releases all the power at once to obliterate her enemies.

The new Treasure Raider mode can be attempted either solo or up to five players, and each player must use one of their attempts to enter the dungeon, VIP8 or above get one extra attempt, and attempts reset daily at 12 am. After entering the Treasure Raider dungeon, players must eliminate various monsters including a Boss. After defeating the Boss, a chest of random quality can appear. Attack the chest and defeat the monsters guarding it for a chance to get amazing loot.