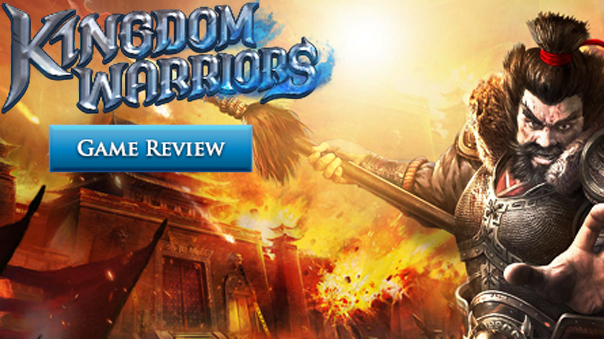 The Warring States period of China has been one of those go-to themes for those looking into creating an oriental themed title. And we have Snail Games going back to that well again with their latest mobile game, Kingdom Warriors. 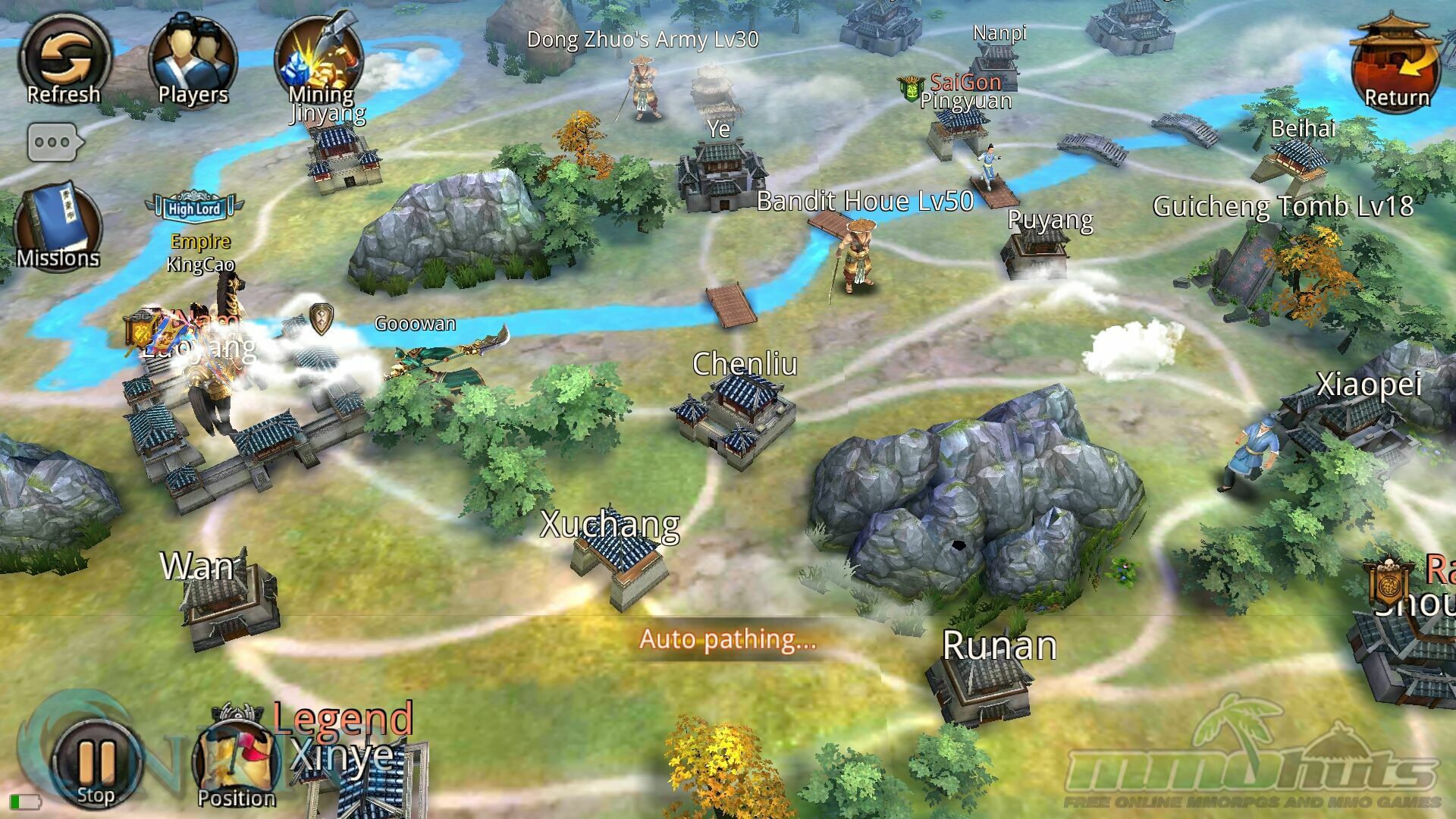 The UI is a bit chibi but functions fine.

Kingdom Warriors is a free-to-play action title for Android and iOS. The game loosely uses the warring states period of China. Your avatar is one of the various characters within this period. You must learn the ins and outs of their skills and abilities to bring glory to the kingdom you represent.

However, Kingdom Warriors presents a twist to the whole setup with the emergence of the national treasures. According to the story lore, whoever brings all 9 national treasures together will become the new emperor. 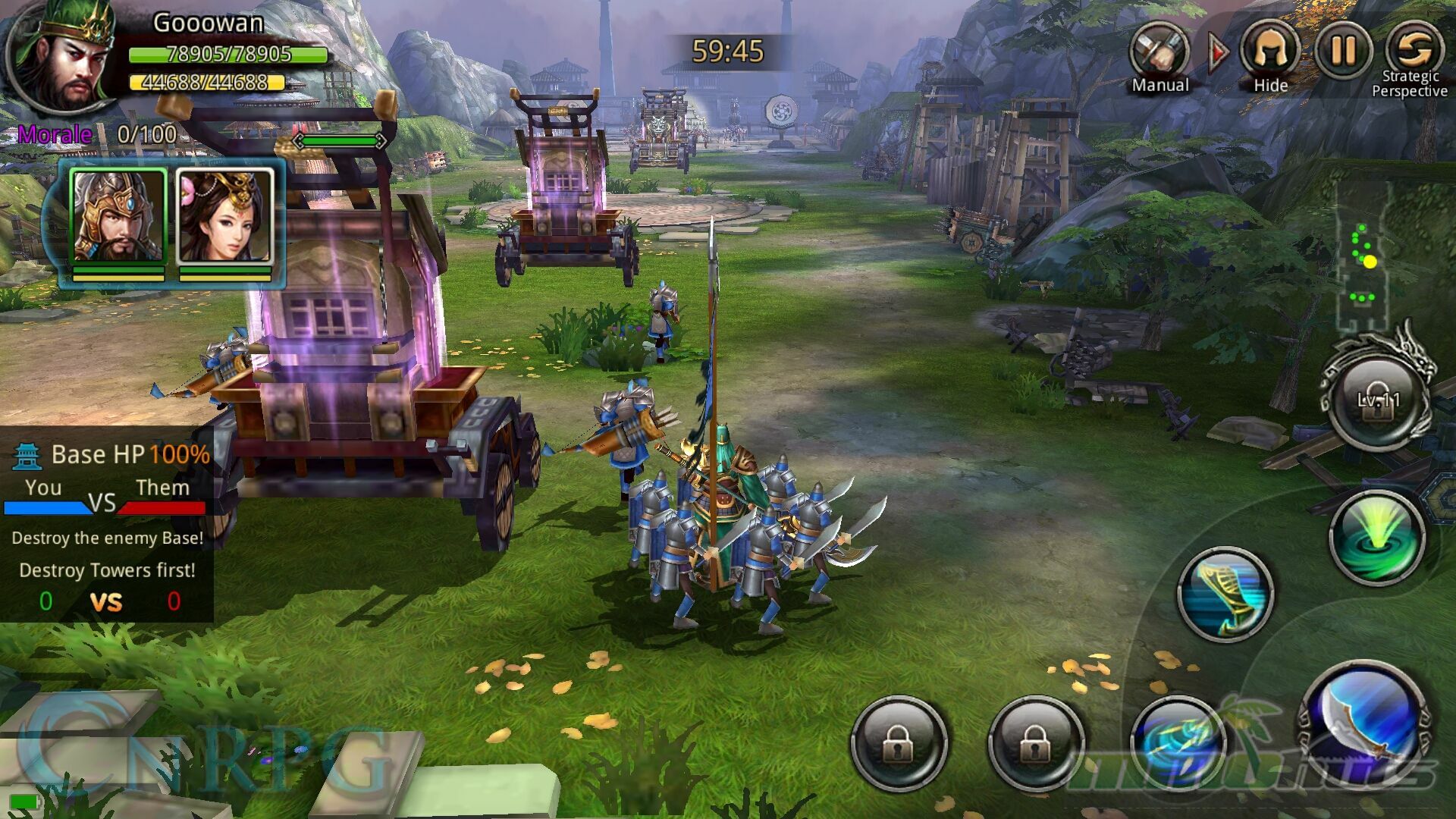 The sheer number of units rendered onscreen can be overwhelming at times... for my mobile device to handle that is

Being an action game, Kingdom Warriors uses the typical streamlined mobile control scheme Snail Games has mastered through trial and error in their recent titles. This means that you have a definite set of activatable skills on one end, and character control on the other side. This control design works well with the gameplay mechanic because you’re going to need to key in commands fast in the heat of battle.

Kingdom Warriors is fast-paced with core gameplay mechanics that feel reminiscent of the Dynasty Warriors series sans the flying and musou attacks. This means that just like in any Dynasty Warriors title, you will be facing against scores of AI controlled units in thematic areas.

But unlike how Dynasty Warriors is typically presented on powerful consoles, Kingdom Warriors is a game made for mobile. This means less powerful phones had to be considered when deciding just how large the pack of units that swarm the hero can be, otherwise the sheer resource demand will bog players down. That happened with mine, with my Zenfone 2 selfie ZD551KL. To address this issue, Snail Games offers a toggle for your “posse” of helpers so they can fight invisibly or be present at arms alongside you.

Speaking of this posse, let me explain how it works. You have the ability to assign “generals” to your hero that will serve as your AI controlled support units. They also come with their own soldier support that you can also toggle to not show along with your hero. These support units can and will provide much needed backup to keep yourself from being overwhelmed on the battlefield. 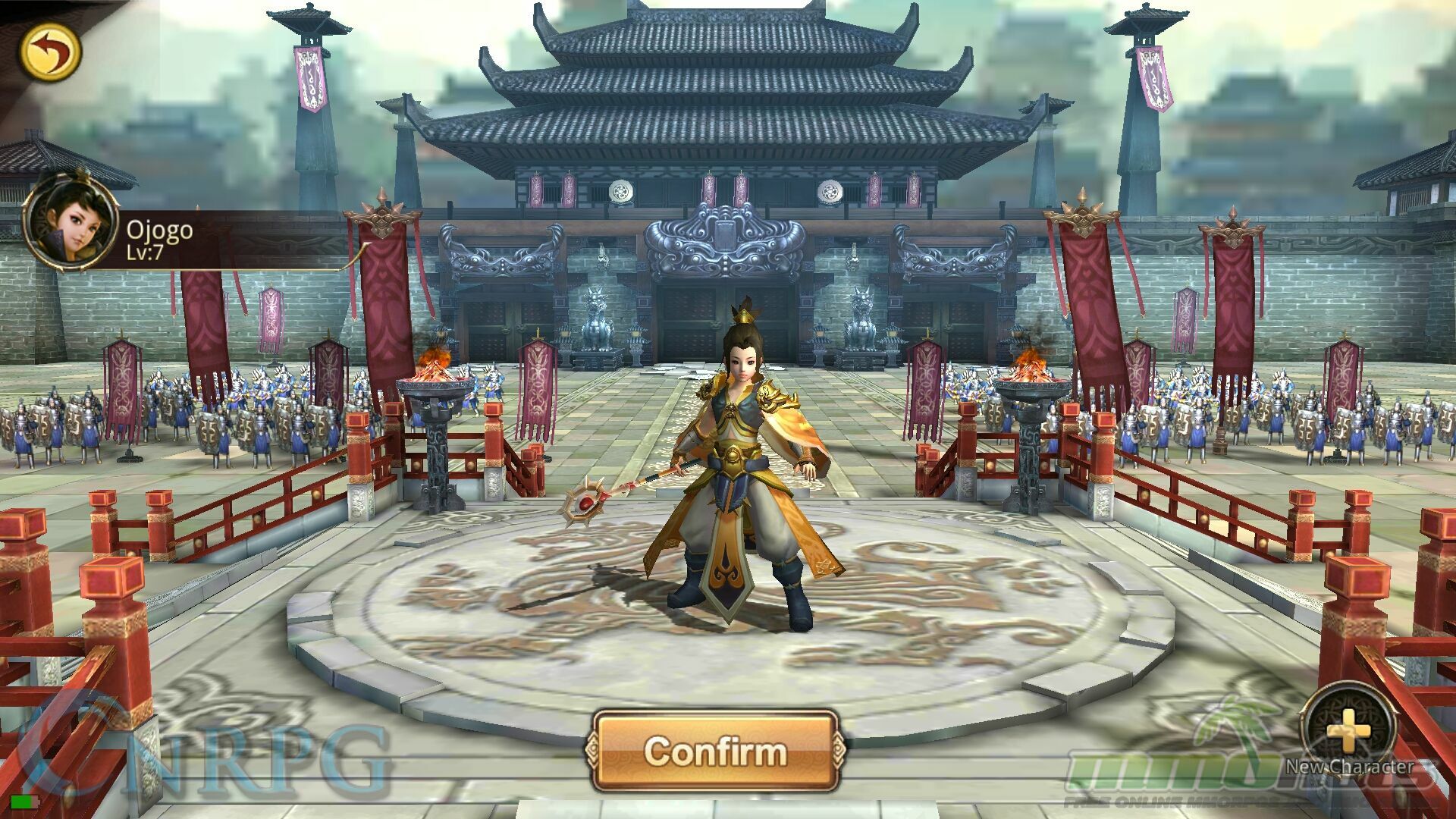 Moving on to the RPG elements, unit growth is highly tied to the equipped weapons, skills and equipment. These items you can improve by the usual means of spending in-game currency or forging their power by sacrificing other equipment and weapons as ingredients.

One would expect that when a game company uses the warring states period, it would be full of really beautiful and extravagantly designed characters. Kingdom Warriors doesn’t disappoint. The usual expected design from the overused heroes of this period retain their trademark visuals and really pop out on screen.

However, there’s a noticeable downside for keeping to this almost high-end visual sophistication. The avatars eat up your mobile device’s resources fast, further bogging gameplay down. The slowdown is visible while you’re battling and even just walking around the cities in game. It never reached the point of crashing my game, but any device older than mine probably would be unable to run Kingdom Warriors smoothly.

Kingdom Warriors also uses the star rarity system for the various heroes/generals you acquire in-game. The game follows the trend of being able to improve the star rating of the low starred characters which in turn increases their stats and damage output. 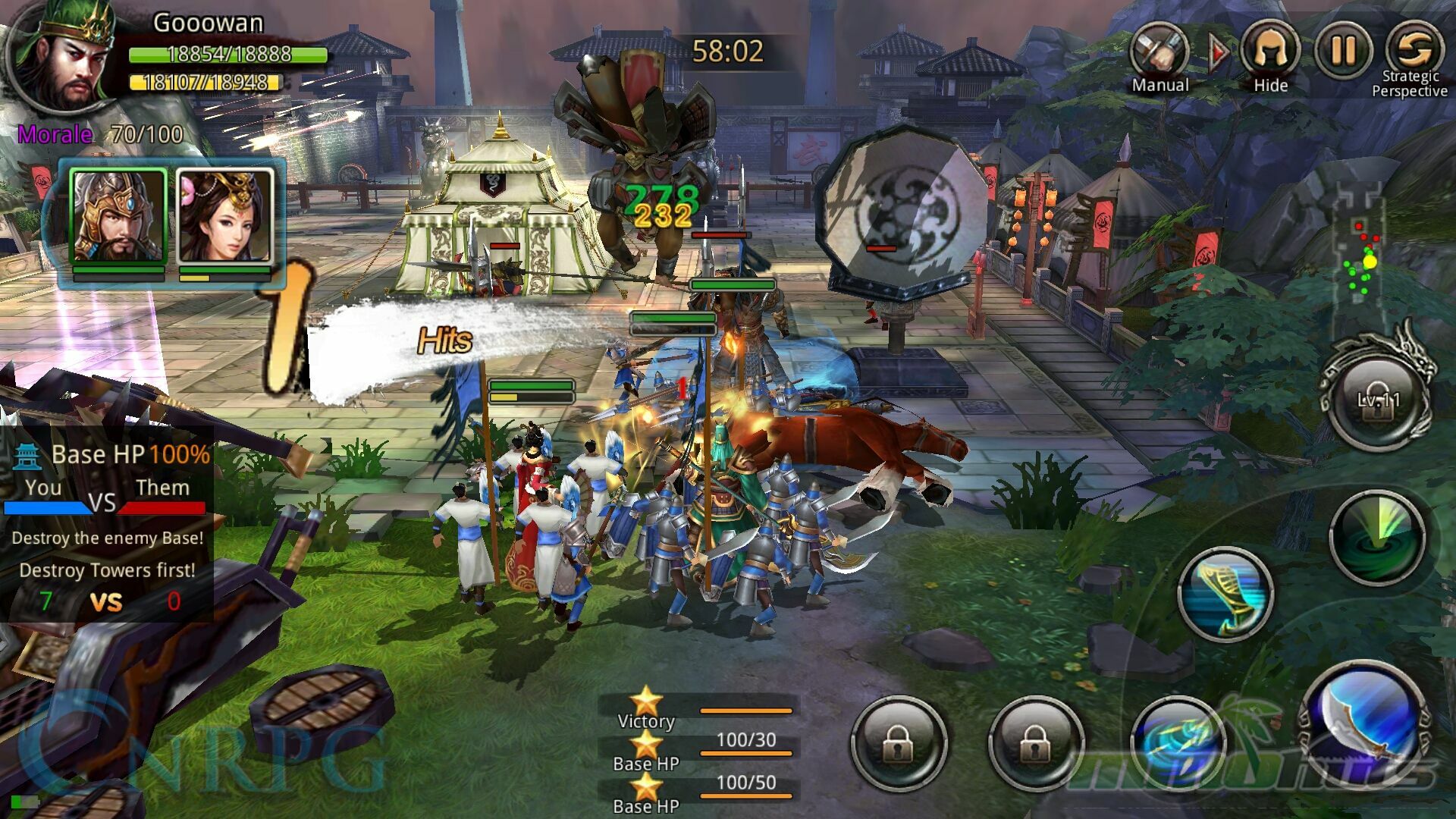 The follower UI is one of the high points of combat.

The game’s AI is pretty decent. You can see that the generals you assign in your formations would focus primarily on the units in front of you. But instead of just focusing on doing auto attacks, the AI immediately unleashes their skills to maximize dps. They’re efficient and effective enough that you won’t ever find yourself micromanaging their ineffectiveness in the midst of battle, whether in PvE or PvP. The AIs know their job and will viciously perform it.

Another thing of note in the game’s hero system is that you are restricted to a rather small roster of heroes; namely, Zhao Yun, Sun Shang Xiang, Guo Jia, Cao Chong and Guan Yu. The rest of the more notable characters are your support units that you can unlock by getting their shards.

As a mobile action game, Kingdom Warriors is a decent outing for Snail Game’s to mark off their need for a Warring States period themed mobile title. The game is straightforward to play and it’s easy to get into regardless of whatever game experience you have. However, the game requires a pretty decent phone to play without hitches. Though online reviews seem to hint a lack of optimization for Android users, while fewer iOS device users have complained. 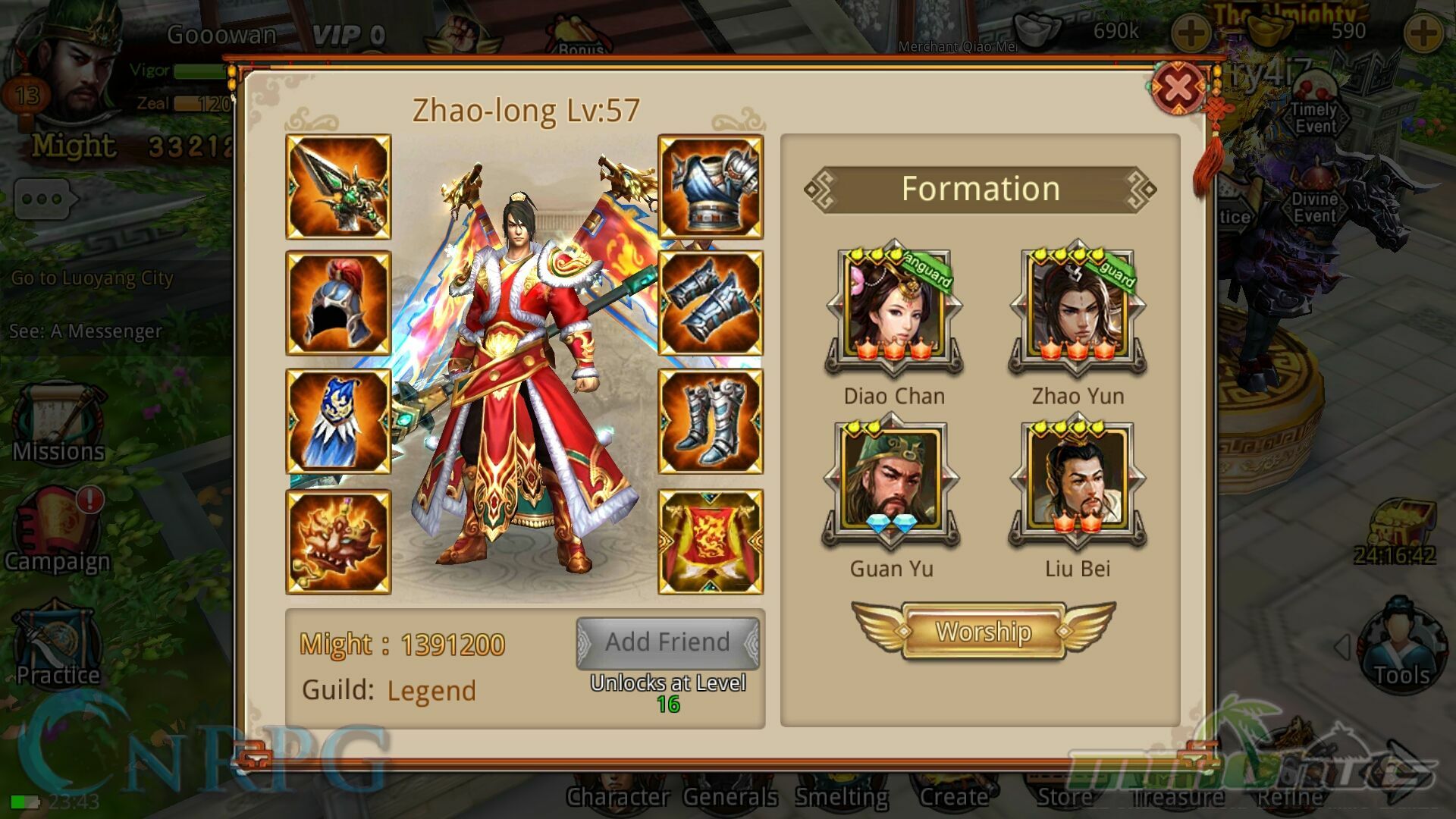 Nothing here reinvents the wheel, but it offers its features in a functional and quality package.

The game doesn’t reinvent the wheel in either the action genre or the warring kingdoms genre even with the twist in the story fluff. So if you’re looking to get your teeth into a game that brings a fresh perspective to the Warring States period on your mobile device, well you’re probably not going to find one just yet.

Overall the game, while unoriginal, is still a good game for people who are at least looking for an action title that’s neither a dungeon crawler nor a 2d sidescroller. The game’s PvE and campaign mode will hold your attention at the beginning, while the various PvP and online play features will keep you coming back for more.