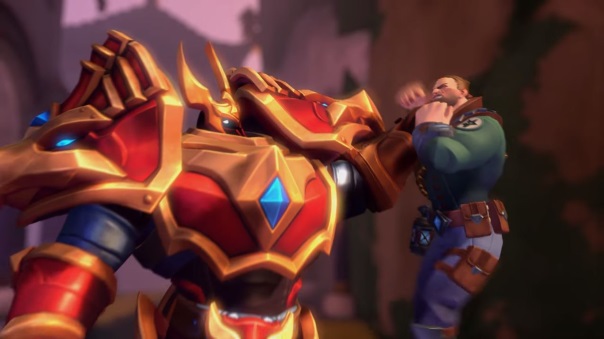 Good morning Internet! This piece was going to have a fair amount of analysis on the SPL this week, but a few things have set me back. The first being NA SPL starting at 5pm EST. This is a terrible idea: Our stream starts at 5:30, so I can’t watch live. I have to watch a replay, which I’m fine with, but that leads me to the second issue: Mixer does not appear to feature a fast-forward/scroll button that works. I love the music picks that Hirez makes for their start screen, but having to wait a half hour, first thing in the morning? That makes for a very cross Ragachak. I’m going to have to find a solution that works for me unless there’s a way to download or fast-forward that I’m not aware of. So if someone at Hirez or Mixer is reading this, please help me out! I’m trying to make quality content here. I am able to watch the EU SPL though, which has been terribly fascinating. You could say Dignitas came out of nowhere, to stomp, as they are still undefeated, but I don’t think that’s a fair statement. Dig has always been an incredible team, they just had a very unfortunate Season 4 in terms of not making it to Worlds.  As it stands, Dig is undefeated 3-0, and my personal team to take it all, Rival is 2-1. Their matches have been fairly decisive, and I think once EmilZy has time to gel with NRG just a bit more, he’s really going to show off what he can do.

This is mostly Smite related, but I simply don’t understand all the reluctance to move to/watch on Mixer. It seems to me like Smite is actually getting bigger numbers than they got on Twitch for the SPL matches. I could be mistaken but I’m reasonably sure I’m not. I polled our Discord, and have talked to a few people outside of that community what they think about our stream (Bottom Tier) moving to Mixer for Smite/Paladins, and possibly even our Bookclubs. You know, a whole migration away from Twitch. The way I see it, Twitch is bloated, a gluttonous wealth of content, where it’s harder than ever to stand out from that crowd. That sounds like a defeatist attitude, but I love how far we’ve come since we started. Mixer is new, and it has some truly fascinating technology to make content creators that want to interact with their audience have that power. What do you gain from having a Monopoly, where content is only seen on one channel? Anything? Sure, there are people on the top of that food chain, making a lot of money doing what they love on Twitch, and I’m sincerely happy for them.

But Mixer has tech that makes the SPL a far more interesting watch, now that the kinks have been worked out. You can watch up to four screens at once, or just watch the one that interests you, and that includes two of the pro players to see how they build, what they level, and what decisions they make in-game. Will that make you a better player? Probably not. But will it let you see what your favorite player (if they’re voted for) does in the game? Absolutely. It can help you make more informed decisions perhaps, but it won’t make you better. The “Faster Than Light (FTL)” technology also lets fans interact with almost no delay with the casters/streamers. That probably won’t be quite as exciting with the SPL streams because neither the casters nor analyst desk will be responding to chat. That’s more interesting for Smite streamers, be they pro or casual. If you have that activated I can see stream sniping being a much harder thing to deal with (since someone who is watching you can see everything you do in almost real time). That would be something I would have to look into, once I’ve played with the platform a bit more (which I’m planning on). I have some thoughts and some plans for that, definitely, stay tuned to MMOHuts for more on that. I will say that I’m excited for the platform and what it brings to professional gaming. There are so many cool things that Hirez can do with it. Tournaments for HOTG? Seeing both players perspective might not be necessary, but seeing what they have in their hands vs. what they play could be terribly fascinating. Paladins is a no-brainer, same deal as Smite: Having multiple viewpoints would really help players see how the game is played at a professional level.

End of the day: It’s gonna be good. Trust me.

Season 2 is upon us, and will 4 bans be enough? God, I hope so. The season is only a day or two old and already people are spewing just about the dumbest things imaginable during the pick and ban phase. I’m only three matches in and my blood pressure has spiked! That can’t possibly be good. I could write a whole editorial simply on analyzing what people say in pick-and-ban phase versus what they do in the game. A fine example would be “Trovald is a bad tank” and the result being someone who picks a sniper with zero mastery, idling through the first two rounds, then feeding. Then having the audacity to complain in post-game chat. It’s a wonderful world we live in. It’s important to not get bent out of shape about these things though: It’s bad for your health, and the last thing you want to do is tilt. Don’t antagonize these people, yell at them, or call them racial slurs (looking at parts of more than one team here). It’s far better to simply be a team player. Positivity may not beat skill, but it sure makes the overall environment more enjoyable. But it’s a new season and there’s no reason why you can’t move away from spitting racial slurs or complaining about someone’s language, and instead come together as a community. It’s not as hard as you think. Wow, this editorial turned into more of a pep talk, huh? I just want this community to be a fine example of what Internet gaming can be, instead of a cesspool that makes my bones hurt from anger and disappointment. You can do it. I can do it. Let’s work together to make this season an exciting one. Plus: Paladins Global Series has started again! I am so behind on it, but I’m going to do my best to catch up and start looking at that content more. I have some ideas, once again.

Next, I want to address Siege of Ascension, Paladins’ very first Event. It’s a special Onslaught map at the brand new (and gorgeous) Ascension Peak map. The premise for it is fairly simple. The Magistrate wants Jenos, the Ascended to be on their side. Khan has been sent to make this happen and he’s not very good at taking “no” for an answer. So this is standard Onslaught, first to 400 points, with a twist: 50% cooldown. Yes, that’s right, all champions in this mode have 50% CDR baseline, before Chronos, before any other cards. For the most part, I love this mode. It’s silly, ridiculous nonsense. You are placed on one of two teams: House Aico (Magistrate) or the Paladins (Rebel Scum), and House Aico has the map constantly under bombardment from siege engines. Or magic. I can’t really say. I just know there are fires, and firebombs dropping. You don’t want to be standing on one of the orange circles when one drops.  So you have to be aware of your surroundings at all times because you could be sniped or bombed out of existence. At first, I didn’t think it was possible for House Aico to even lose. The entire first day I played, the only wins came to House Aico. I won twice in a row as a part of the Magistrate’s forces, then it was all losses the rest of the night. That could be because we were a five-man at that point, and not everyone knew the champion they were given (myself included, not casting shade here. Honest.) so the results were upsetting. Losing for an hour and a half is honestly pretty frustrating.

So what’s the most important lesson to be learned in this mode? Don’t be a one-trick-pony. Have a wide arsenal of champions you can play. Each side only has five champions they will have access to (assigned at random) and there are no trades allowed. I think that players should be allowed to trade, to make some of these matches less reliant on the chance that you know Skye, when you primarily play healers, for example. So it is imperative to success in this mode to have one of two things happen: Get lucky enough to play a champion you’re familiar with or 2: Know all 10 very well. Personally, I don’t. I play tanks and healers. I can’t flank, I’m bad at it, and I need to practice it at some point. I got stuck on Skye all morning and it was the most frustrating experience I’ve had in my entire time of playing Paladins. Every time I’ve tried to practice her in a live setting, all I get is harassed, trash talked, you name it. Bots can only teach you so much, friends. You have to let people grow. My first Rebel/Paladins side win did not come until this morning, where I not only carried the team as Jenos but got a spectacular play of the game for it. It can happen, you just have to have a team of people that know what they’re doing (or have an opponent that does not. Works both ways). This mode can be fun but also frustrating, when there’s a 300 point deficit, and the enemy Buck just dancing on your corpses. As of right now, these are the teams:

If there are more characters in the mode, I sure haven’t seen them. I know there are more people on both sides. For example, Torvald, one of the masterminds behind the crystal technology the realm enjoys, works with the Magistrate to put down the Resistance. The Magistrate is the reason he can conduct his research, so he does what his master bids. Why wouldn’t he be sent to the front lines of this battle? Then there’s Barik, who pledged his life to the Resistance. Then there’s Lex for the Law and the criminal Androxus.  There are so many more choices here. So it’s my hope that since this will be in the game for a few patches, each update will increase the number of characters picked, or swap them out for others. After all, that’s a long time to be on the front lines of an important battle. Will the siege get stronger? More obstacles to avoid, will the character’s power grow (with even more CDR? Maybe more damage? Resistances?) with each iteration of the Siege? I’m certainly curious how it will evolve, and I hope sincerely that it does. I have some questions, a couple of suggestions, on how to fight instead of fleeing west.  Er, what I mean is, I have some ideas on how to help this mode change. As a side note, please at least give us a few seconds to customize? It would be appreciated.