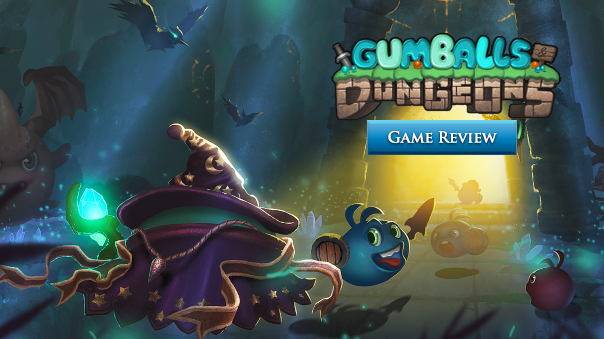 Once in awhile, I’ll be taken by mixed mood of boredom and curiosity and find myself browsing through the Google Play store. With the natural flood of games on the mobile market on a daily basis, it usually only takes a couple of weeks before my recommendations have fully changed over to new names. And yet one title recently stalked my recommendations: Gumballs & Dungeons.

I shrugged this game off several times, convinced that at a cursory glance, the game was just not suited for me. How was I supposed to care about a bunch of gumballs, anyway? I don’t even chew gum. Still, a couple of weeks ago, I relented and gave the game a chance. Many battery recharges later, I’m still hooked, and with a new update set to give the game more social and end-game content, now’s the perfect time to give a review of this quirky rogue-lite mobile game.

The core gameplay of Gumballs & Dungeons is dungeon exploring, and it is designed almost identically to Dungelot. Each floor of the dungeon is covered in tiles or ‘slates’ connected to each other in a top-down style grid. From the floor entrance, players must clear these slates by tapping to expose what might be underneath – items, events, and even enemies. The goal on each floor is to find the key that will unlock the next floor, down until the final floor where the boss must be defeated.

While not a true rogue-like, there are some elements rogue fans will be familiar with. Dungeons are somewhat randomized, especially on endless challenge floors. Characters – Gumballs, that is –  also must re-gear themselves each time they enter the dungeon, making progression within a dungeon a priority for a successful run. Finding and earning more permanent upgrades allows each gumball to have a better chance of surviving in their next run. Gumballs also progress in each dungeon by unlocking “titles,” which grant specific buffs during that run. 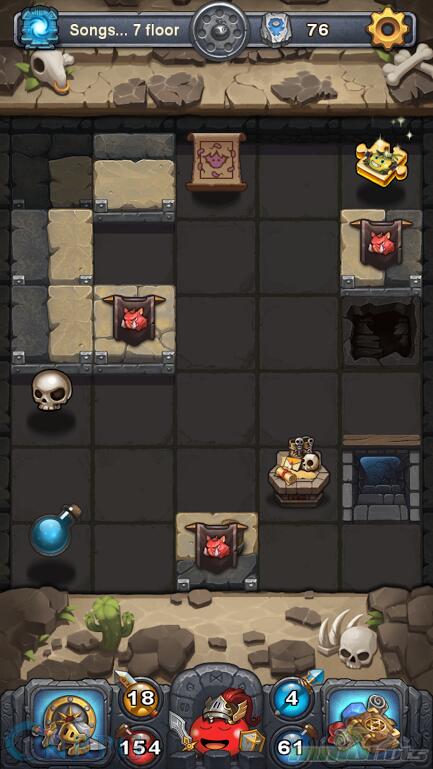 To assist with that, Gumballs & Dungeons also features an idle game component. This allows players to passively farm gold, food, and resources. These, in turn, can be transformed into items like potions and equipment that can be taken into a dungeon crawl to further help boost a gumball. With a variety of gumballs to unlock and mazes to explore, there’s always a sense of progress.

I was first introduced to the ‘tap and clear’ style of rogue-lite gameplay in Dungelot: Shattered Lands on PC. While I appreciated and enjoyed the game, I got the sense that the experience would be better played on mobile, where there was more of a direct response using a touch screen. Gumballs & Dungeons has proven that right, and as a result, I’ve put plenty more hours into G&D already in the past two weeks than I have with Dungelot in the past year.

Likewise, I must caution mobile gamers: this isn’t a game that you can pick up for five or ten minutes at a time. Even early on, your dungeon explorations will take sometimes a half hour to complete, and for those going to challenge the endless mode, expect to sit down even longer. While you can interrupt your game at any time and resume the maze later on, the end result is the same: this game will gladly chew up your time like the gumballs you’re pretending to be. On the bright side, this also means that the game’s stamina system isn’t too punishing.

Gumballs & Dungeons, as a free title, also has a cash shop which uses ‘crystals’ as a purchased currency. The game does give out a fair amount of free crystals, and while not as generous as some mobile titles, the purchases that can be made – new mazes and gumballs in particular – are quite valuable. There are, however, also plenty of sinks: for instance, there are several useful idle upgrades that will take crystals to complete, and reviving in a maze also costs crystals. If you’re careful with your use of them, you can make free ones go a long time. While it’s not pay to win, if you’re the “gotta have them all” type, you’ll end up pulling out your wallet eventually. 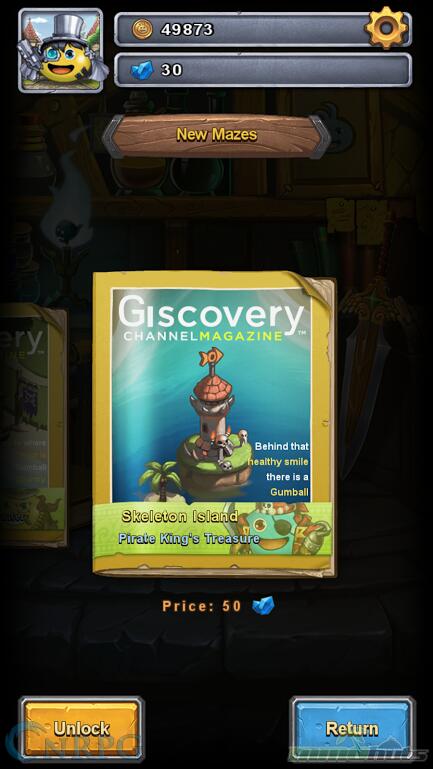 Given the small size of the game’s developer, Qcplay, that may be a worthwhile investment. This is no quick cash grab: Gumballs & Dungeons has been developed by a small team over several years. The dev team is communicative, leaving regular notes for their players and encouraging and participating in community discussion on their Facebook. They’ve even transparently apologized for translation issues and welcomed player assistance in localization. It’s clear the team has a passion for the product they’ve created.

The City of Steam

Which leads into the latest update for Gumballs & Dungeons: the City of Steam. This update – launched just this past week – introduces three major features for the game. The center of this is the City of Steam itself, Dacaa. The capital of the Machine Empire, this area offers a challenging new maze with new enemies including tanks, robots, and aircraft. There are new gumballs here including Zeros and a hidden feline gumball.

The second exciting feature is the Chain of Fate. This allows you to search for other nearby players (and we do mean nearby – this is on a very small-scale, local level) and ‘link’ together with their gumballs. Depending on the gumballs linked together, players can earn special rewards, from coins and gems to buffs and coveted pots. Like Pokemon Go, I can see this feature frustrating players who are in more rural areas, and yet those who can make use of it will certainly be able to capitalize on its benefits. 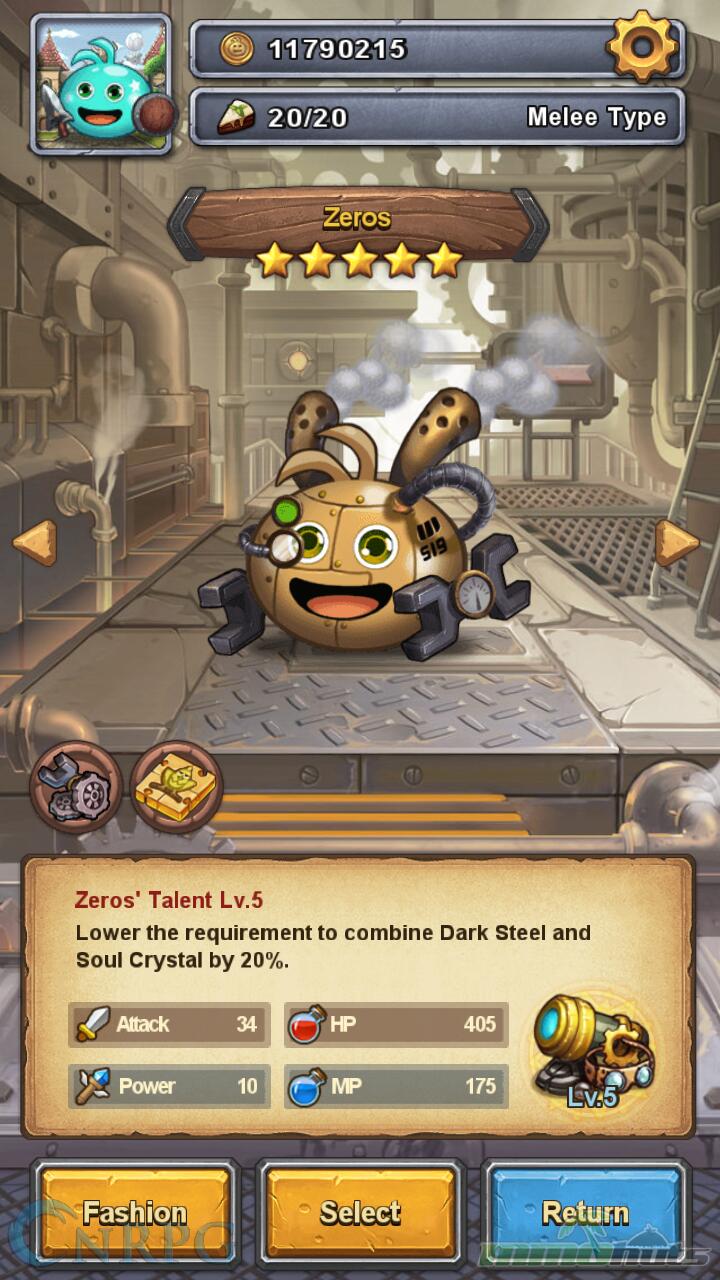 Zeros is just one new gumball.

The third feature, and a wonderful topping to the Chain of Fate, is a new world-wide chat system. This can be activated at any time, and even lets players form Alliances. These Alliances let players team up, share resources and earn special rewards. The chat and Alliance feature are unlocked after repairing the airship, another feature in the current late-game. There might even be a few other hidden features tucked away: after all, QCplay loves hiding secrets in the game.

What Gumballs & Dungeons lacks in shiny outer coating, it more than makes up for in its surprisingly deep gameplay. Most everything feels in balance, and even when a grind hits the game stays varied enough to remain fun. If you were a fan of the original Dungelot series, or are just a fan of rogue-lite gameplay, Gumballs & Dungeons is a fantastic game to lose yourself in. With continued development and polish, it may be a long-lasting install on my phone and yours.

Gumballs and Dungeons Only 37