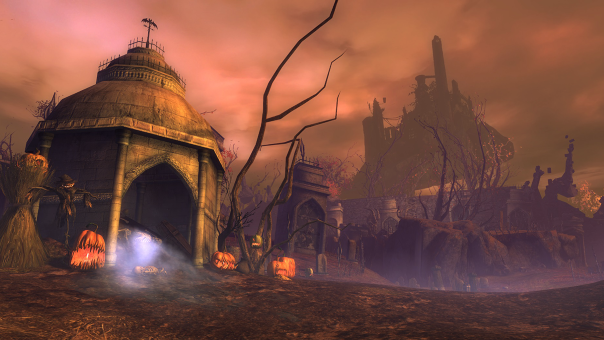 Guild Wars 2‘s most celebrated and time-honored tradition is coming on October 16th – the Shadow of the Mad King! Lasting until November 6th, a host of fun, spooky events will take place. Reaper’s Rumble makes a return for the first time since the initial GW2 Halloween celebration, and it is a fast-paced PVP format where players recover pumpkins and spawn hordes of skeletons to destroy the enemy base. Mad King’s Raceway  is a new event for this year, but is built on the same map as Reaper’s Rumble and showcases the star mount of the current living story – The Roller Beetle. Three new weapons are also on the way! These took inspiration from real-world horror tropes: a syringe that functions as a dagger called The Cure, a lightning rod players can wield as a sword called Soul Conductor, and a butcher knife players can use as an axe called Revenge.  Players who have completed Episode 3 of Season 4 of the living story can delve into the ancient rivalry between Mad King Thorn and Palawa Joko through a new collection achievement