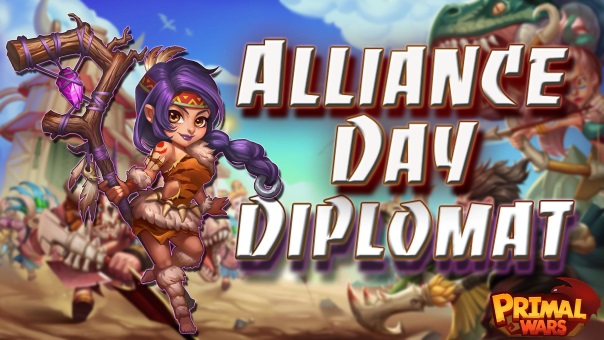 Some games, be it Mobile, PC or Console, give you the ability to join a guild, clan or some sort of alliance which can give you buffs or other little extras, whether it be a guild banner, a guild bank to dip in to or an easy way to find people to boost your level. Primal Wars: Dino Age by 37Games is a mobile RTS which really puts the ‘Ally’(phonetically) in Alliance. The game plops you in the large open plains as the Chief of a small tribe which you have to grow and eventually expand, the plains become your hunting grounds and eventually, along with your Alliance, your empire.

To succeed in Primal Wars one would need to rally the other chiefs of local nearby tribes. Once you have accomplished in finding a bunch of like-minded Chiefs to join your Alliance, it’s time to rule the plains. Of course, others will have the same idea, and to triumph over other Alliances you will need to work together with your newly found friends, this can be done in many, many ways.

Your Chief is not invincible mind you, they can become prisoners of war or even executed by the enemy! Never fear, your Alliance is here! With your Chief gone you may be unable to muster up enough combat strength to send a rescue party for your imprisoned Chief, but some one in your Alliance may just have the CP needed to return your Chief to your tribe. Oh, it seems during the rescue mission cost a lot of resources for your Alliance friend, never mind, you can repay them! Trade and transfer resources to your allies to boost each other to the highest positions of your Alliance, or Server.