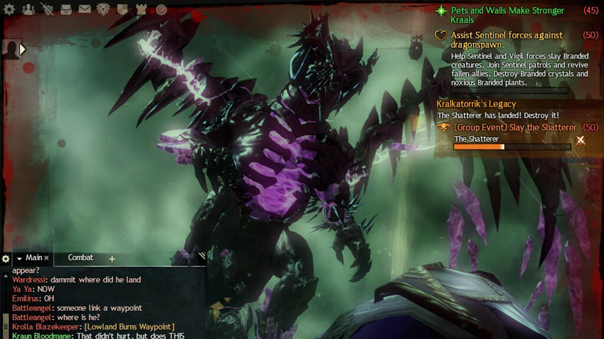 At last comes Guild Wars 2, successor of the much cherished title of the same name, after long months of teasing us with videos and the occasional very restricted beta test. For those who don’t know the series, Guild Wars was a high fantasy online roleplaying game released back in 2005, which focused on guild competition and player-versus-player action, in addition to having absolutely no subscription fee. It was immensely successful, which explains the hype that has been building up for Guild Wars 2 over the last few years. Guild Wars 2 aims to keep the most prized features from the first title; top notch PvP, epic fantasy adventures, and no subscription fees, and then adds a whole bunch of new goodies, from World vs World, to an entirely new crafting system. Needless to say that it’s got very big shoes to fill. So with that said, and now that it’s released, does Guild Wars 2 actually make the cut? 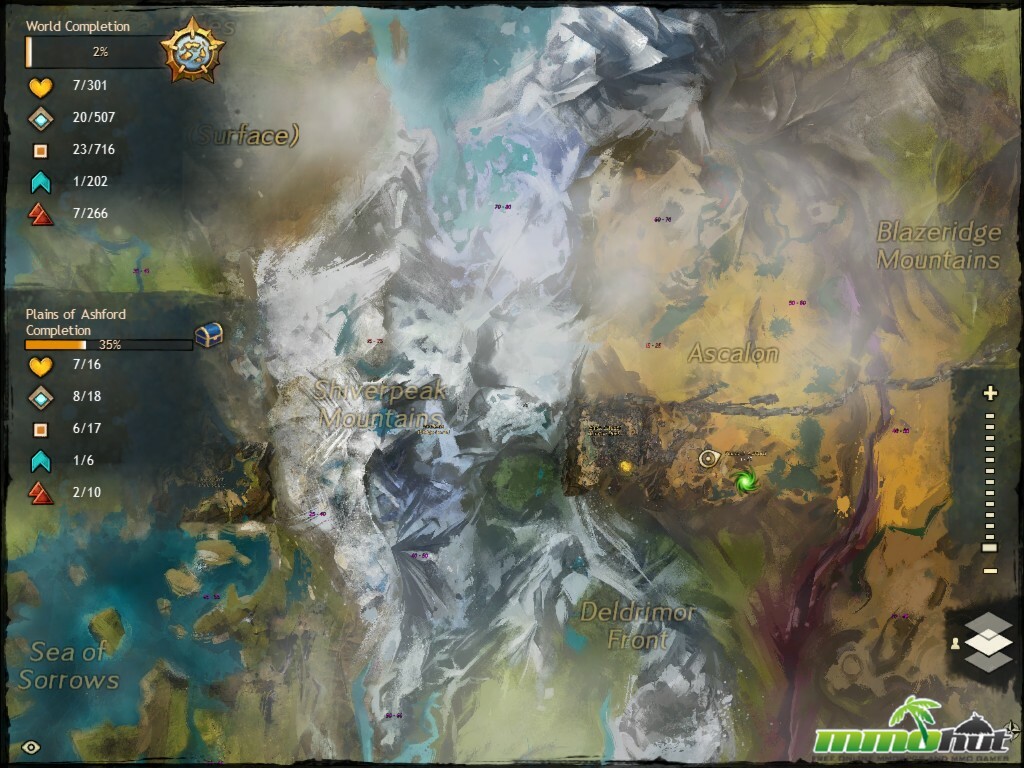 First off, Guild Wars 2 is a very light game in comparison to recent big names, and the entire folder is only about 14GB (as of the writing of this). It’s surprisingly compact and thus most likely won’t annihilate your bandwidth. Even with its small size, you don’t need to go very far into the menu to realize that Guild Wars 2 looks really, really good. This is a title that can boast having a lot of hand drawn art, a continuation of the first title in that regard, but now also benefitting from better technology. The in-game graphics are solid quality, and don’t require an incredibly performing graphic card to run. In fact, there really is little that looks bad in Guild Wars 2. Characters look good, effects are diverse/flashy, etc, but what really takes the cake is the stunning environments you’ll go through. Plant cities, thick fogs on a lake, artillery-bombed trenches – all sculpted with incredible attention to detail, are just some of the locales you’ll go through. Overall, this is a visually rich experience that won’t run your GPU in the mud. Sound is also a significant part of the adventure, with a lot of characters including your own, having voiceovers. These can be a hit or miss, with some being top notch (Asura and charr voices come to mind), while some others can be very awkward. Music might seem, if you’ve played Elder Scrolls games, oddly familiar. That’s because it’s composed by no less than freakin’ Jeremy Soule! It’s excellent at setting the mood, whether you’re exploring a snowy mountaintop, or a lush valley. So far, so good! 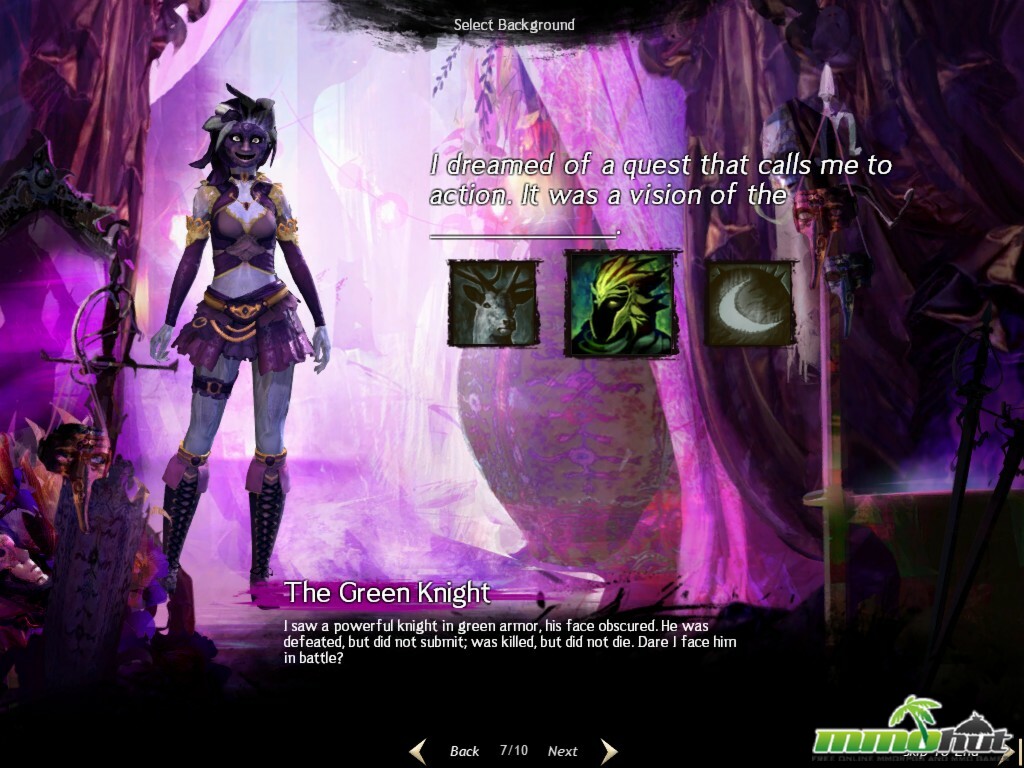 You start off with 5 character slots, which might just be enough to please the average gamer, but probably won’t be enough for the alt-aholics among us. Because let me tell you this, character creation alone has a LOT of value in store for you. You choose from among five races, the humans, the asura, the charr (from the first game), the norn or the sylvari, each being quite interesting, and with their own special abilities, ranging from healing prayers, to a freakin’ steampunk charr bazooka. Many classes are returning (see the overview for thorough descriptions), and there are some new additions, those being the engineer and the thief. Your choice at this point is crucial, as each class plays very differently one another. The customization options are a few handfuls depending on your race, with between 10 to 20 hairstyles each, different faces, body shapes, patterns, etc. Thankfully, there are size and position sliders for extra customization, so you can change bits and pieces to your heart’s content. Once that’s done, you enter the storyline bit – which essentially lets you choose diverse elements of your past in order to give form to a part of the storyline you’ll experience in-game. Then pick a name, and you’re off to Tyria. 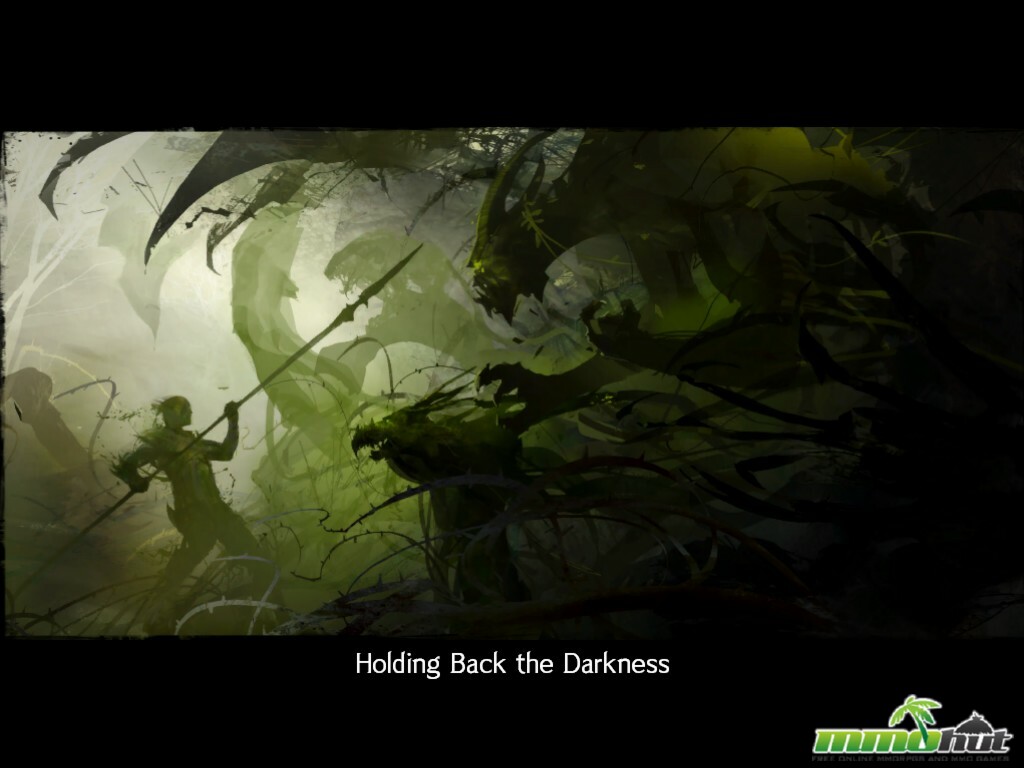 The overarching structure of Guild Wars 2 is a compact version of what you’d expect from another MMORPG. Essentially, you have one main series of quests that you follow throughout the game, in-between which you acquire experience through various means, the main one being quests for local NPCs. Once done, these NPCs become merchants which sell you gear/ingredients/etc in exchange for karma, a special currency acquired by doing quests. You can also level through many other different methods, including crafting, world vs world (PvP) and even exploring, each of which can award sizeable chunks of experience. Quests are in areas called “Hearts”, zones in which you automatically acquire quests and can then start working on them right away. Most likely, you’ll go from heart to heart, slowly completing the map as you go. Now, this does tend to get repetitive with time, even a bit grind-y to some extent, though this can easily be corrected by spicing things up with some crafting, PvP or dungeons. You’ll also encounter dynamic events, which are essentially difficult quests requiring the cooperation of many players. These award karma, and can be anything from escorting a caravan to a full-on dragon attack, and go a long way to adding an unpredictable, living element to areas. At least, on the first run through. 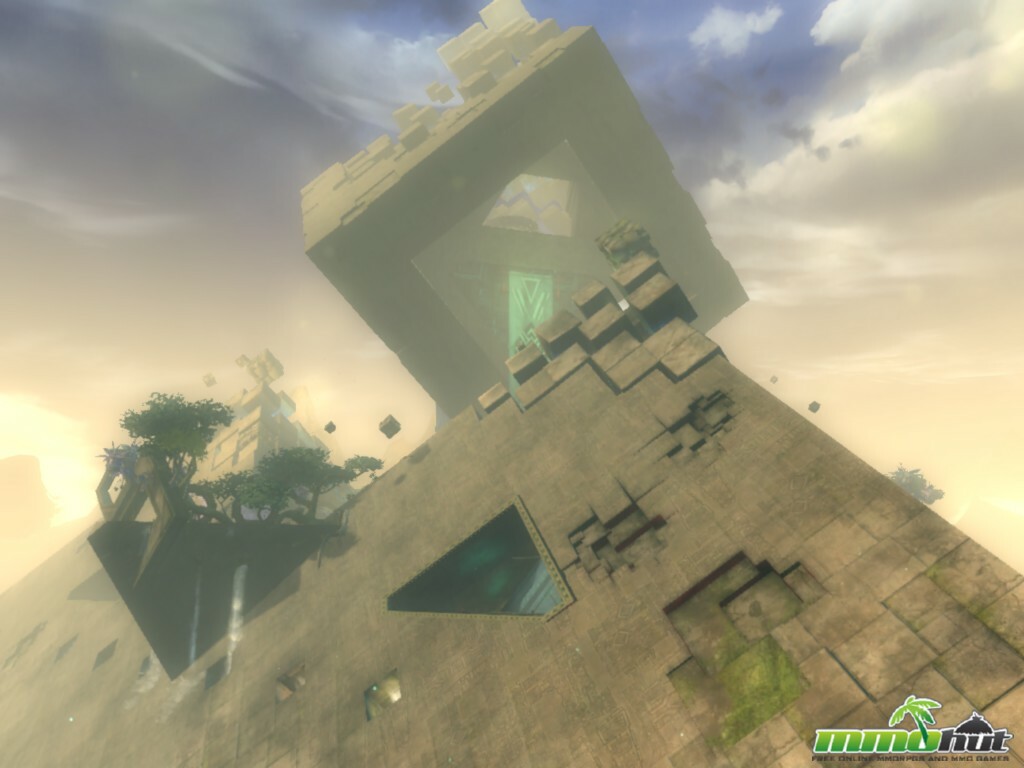 Everything in Guild Wars 2 is designed with multiplayer in mind, so most of your powers can be found to have diverse uses. A clear example is combo fields, which let you combine a skill with another player’s area of effect spell, boosting the efficiency of both. This is also reflected in game modes, such as organized player-versus-player, 8 vs 8 matches focused on capturing specific areas. This mode has its own progression ladder, with increasingly different rewards as you increase in rank. Where Guild Wars 2 really comes into its multiplayer competition potential though, is World versus World. This mode matches three servers (hundreds of players) together on 4 different maps. Each has keeps, towers, supply camps that can be captured by any side, in turn providing bonuses to players from their server in their daily activities, in addition to rewarding the combatants with loot and experience. However this mode also has the side effect of low frame rates and the tendency of causing players to “zerg” (gather in huge, follow-the-leader mobs) in order to take down keeps. Guilds can, and do frequently intervene in organized manner, as they have the possibility of capturing and holding areas, complete with their banners hanging from the keep walls. In a way, this is one of the major end-games, as guilds can have a huge impact on server performance, and can lead to getting your server matched with stronger opponents. 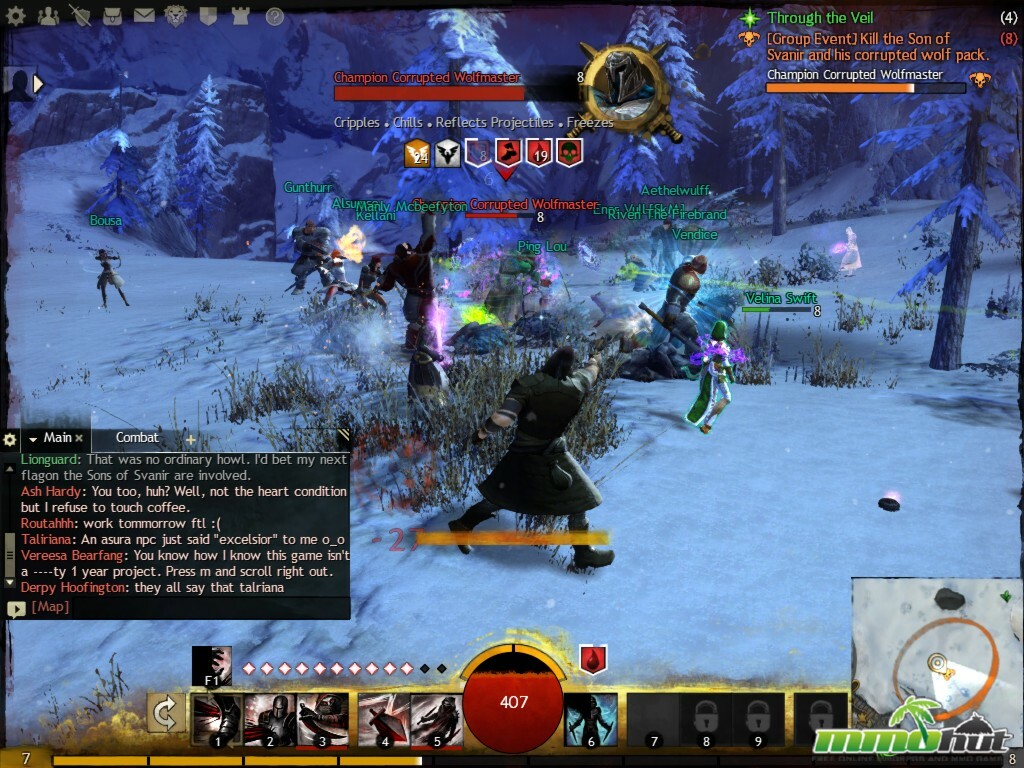 Skill progression happens through unlocking powers using skill challenges consisting of mini-bosses found around the world, and of course through leveling, which gives you access to the trait tree, that in essence is a sort of 5 branch talent tree. Interestingly enough, there is no specific class niche, so most classes can play most roles to varying degrees, and they can definitely hybridize through traits. The thick of the experience though, is the combat, which changes dramatically depending on your class. You have a skill bar, half of which is determined by your choice of weaponry and the other half being utility skills picked at your whim. Most classes can switch between weapon sets on the fly, making for some pretty interesting, but somewhat static combinations. In other words, this is a fluid, fast paced and easily balanceable system that is otherwise very lacking in options and diversity. Added to this basic layer are individual class mechanics, like illusions for mesmers, or adrenaline for warriors, most of which are a total blast, with only some being so-so (necromancers come to mind). 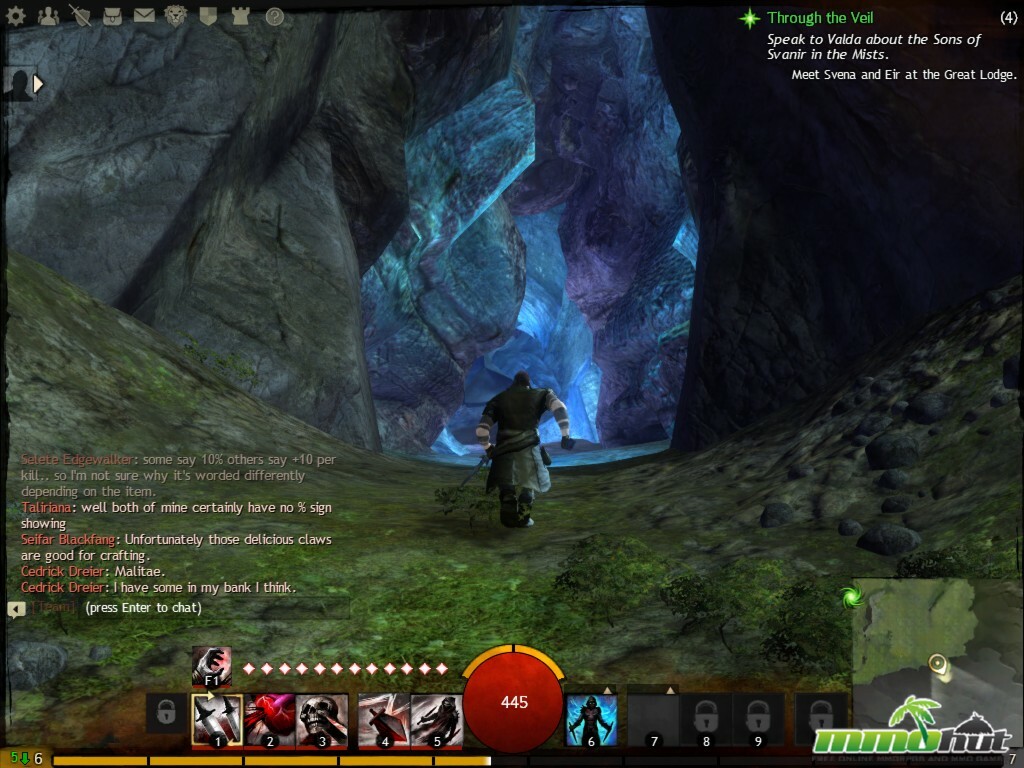 One of the issues of Guild Wars 2 is a lack of tutorials. Once you reach the advanced mechanics, such as combos, dungeons, and crafting, there’s very little in the way of help. This becomes even more distressing considering that Guild Wars 2 dungeons are dead serious, as in, excruciatingly hard. This can be a positive or negative depending on your preferences, but be warned, don’t go in there expecting a smooth run. You will die repeatedly, and you need not only be patient, but also skilled at dodging and choosing appropriate trait builds. This is compounded by the fact that the game has no designated roles, so few ways to manage “agro” or healing. And just in case you wanted more challenge, dungeons also come in explore mode, letting you unlock extra areas and bosses for some increased rewards. Now, some words on the cash store; it’s clear that ArenaNet has a lot planned for it, but as of the writing of this, there’s not much to see. Some vanity clothes, boost items, and the promises of future player housing. The prices might be a bit too high too, but other than that, it’s mainly the lack of options that might be a bit dissuasive from buying in the cash store. 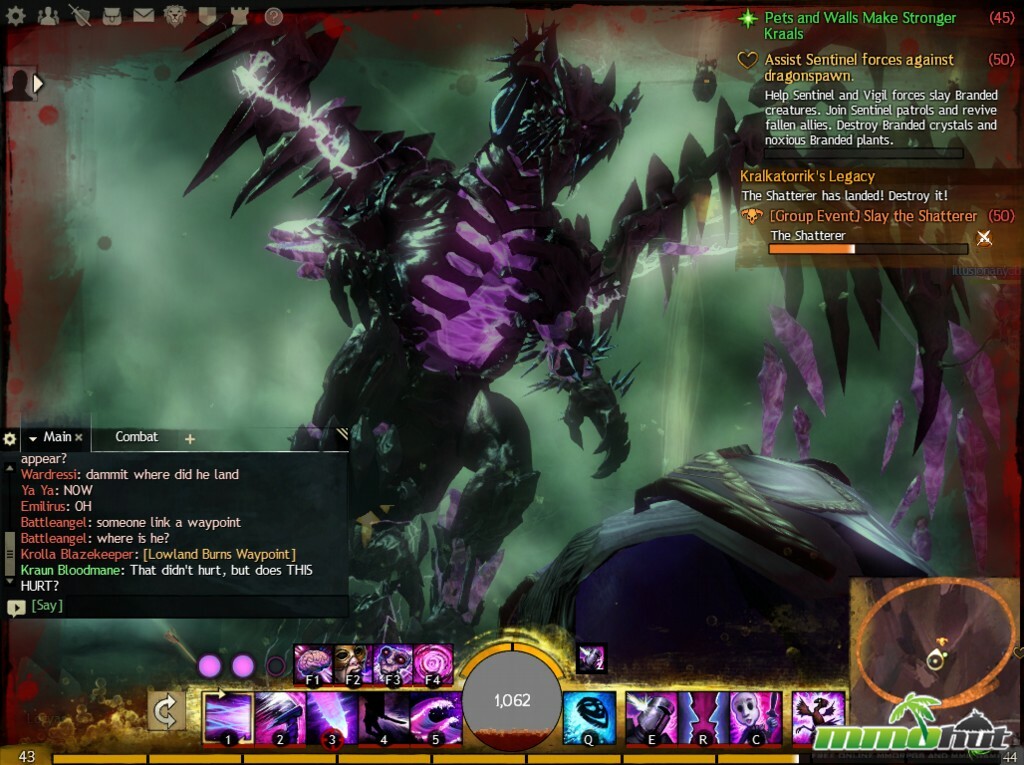 Final Verdict: Excellent (5/5)
So is Guild Wars 2 living up to the hype? In most cases, it does. It brings back the challenge of its predecessor, the interesting class mechanics, the competitive action and most importantly, a fluid and crisp experience. While it has its failings, notably the repetitiveness of quests, the difficulty of dungeons, or the oddly awkward voice acting, it literally raises the bar on the aspects it gets right, such as large scale player versus player. There’s no question that this game gives you lots for your money, and if you’re a fan of classical fantasy MMOs, PvP, or dungeon running, you need to at least try this one.