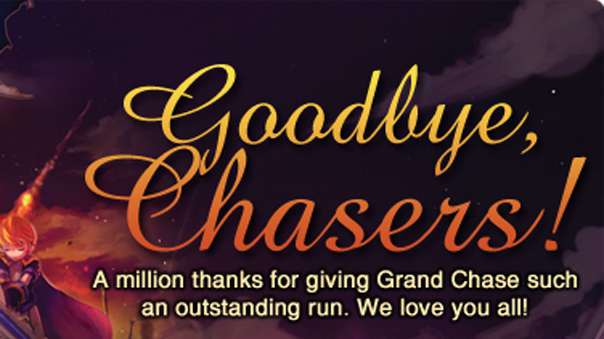 “Grand Chase had a tremendous impact and paved the way for so many MMOs that it is simply time to say goodbye and allow players to embrace these new experiences,” said Eugene Kim CEO of KOG Games. While it’s the end of Grand Chase, it’s only the beginning of what we at KOG Games have in store for our community.”

To thank its loyal community for years of fun and mayhem, Grand Chase will host a farewell Livestream and post a special “Thanks and Goodbye” video from the Developers and GM’s, numerous Grand Chase tournament champs and more. Fans are invited to join the special guests and look back in the final hours of the beloved Grand Chase today April 15th from 6pm – 9pm PDT.

Players can also check out the Grand Chase tribute blog where KOG has collected the history, images, music and more! Fans can learn more about the lore and download their favorite images. (http://grandchase.elswordonline.com/2015/04/grand-chase-tribute-blog/)

Grand Chase launched in Korea 12 years ago and followed with a North American launch 7 years ago. Grand Chase was a force to be reckoned with in the fighting game genre, and it was home to some of the best competitive players in the world. KOG wants to thank its strong community of players over the years and while this marks the end of Grand Chase this is only the beginning of what’s in store for KOG!