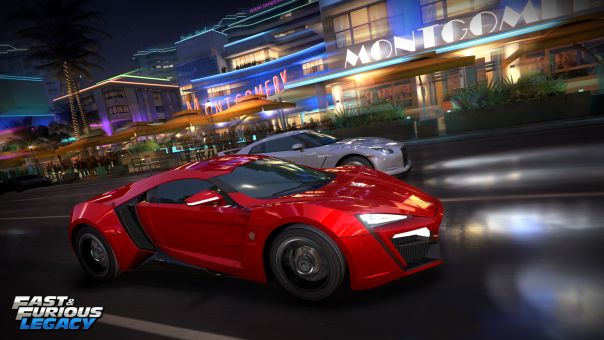 “We had a fantastic collaboration with Kabam on Fast & Furious 6: The Game, and together wanted to build on that success to create a new game that dives deep into the Fast & Furious universe and is true to the brand,” said Calvin Lim, Vice President, Mobile, Universal Partnerships & Licensing. “The films’ passionate fan base will love being able to extend their Fast & Furious experience beyond the theaters and play whenever, wherever on their mobile devices.”

In Fast & Furious: Legacy, players join Tej, Roman, Letty and other characters to tear up the streets in super-charged story missions set in a unique storyline inspired by Universal Pictures’ Fast & Furious series. Lead a crew against rival teams and race in iconic movie locations around the globe from Rio de Janeiro to Tokyo to Miami and back to Los Angeles. Trick-out custom rides and weave through traffic, avoid the cops and score airtime on jumps in all new adrenaline-pumping game modes. Game features include:

Fast & Furious: Legacy, the official mobile game of the Fast & Furious film franchise, is available for free on the App Store for iPhone, iPad and iPod touch, as well as on Google Play. For the latest game information, visit www.fastandfuriouslegacy.com.